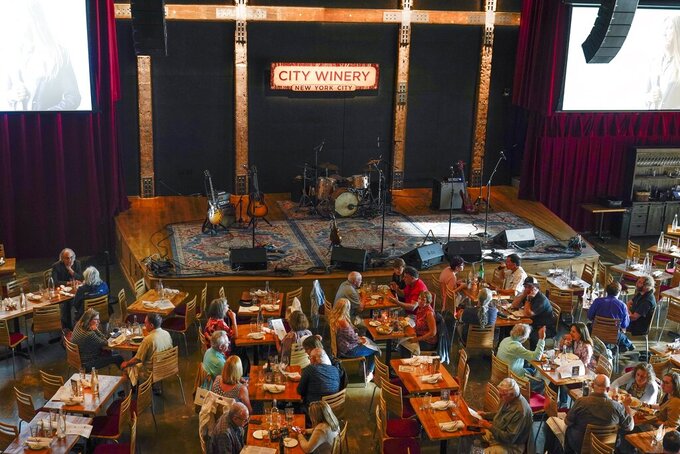 Patrons dine at City Winery Thursday, June 24, 2021, in New York. Customers wanting to wine, dine and unwind to live music at the City Winery's flagship restaurant in New York must show proof of a COVID-19 vaccination to get in. But that's not required at most other dining establishments in the city. And it's not necessary at other City Winery sites around the U.S. (AP Photo/Frank Franklin II)

Customers wanting to wine, dine and unwind to live music at the City Winery's flagship restaurant in New York must show proof of a COVID-19 vaccination to get in. But that's not required at most other dining establishments in the city. And it's not necessary at other City Winery sites around the U.S.

If City Winery tried doing such a thing at its places in Atlanta and Nashville, "we would have no business, because so many people are basically against it,” said CEO Michael Dorf.

Across the U.S., many hard-hit businesses eager to return to normal have been reluctant to demand proof of vaccination from customers. And the public and the politicians in many places have made it clear they don't care for the idea.

The Centers for Disease Control and Prevention still recommends masks when dining or gathering indoors for those who aren't fully vaccinated. But few states require it, and most businesses rely on voluntary compliance — even in places with low vaccination rates where COVID-19 cases are climbing.

Digital vaccine verification programs could make it easier to enforce safeguards and tamp down new outbreaks.

"But that only works when you have mass adoption, and mass adoption requires trust and actual buy-in with what the state health department is doing, which is not necessarily present in all states,” said Alan Butler, executive director of the Electronic Privacy Information Center, a Washington-based nonprofit organization.

Hawaii is the only state enforcing some version of a vaccine passport. It requires travelers to upload a photo or PDF of their Hawaii vaccination document or pass a pre-arrival COVID-19 test to avoid having to quarantine for 10 days.

Earlier this month, California became just the third state — behind New York and Louisiana — to offer residents a way to voluntarily display digital proof of their COVID-19 shots. None of those states requires the use of their digital verification systems to access either public or private-sector places.

By contrast, at least 18 states led by Republican governors or legislatures prohibit the creation of so-called vaccine passports or ban public entities from requiring proof of vaccination. Several of those — including Alabama, Florida, Iowa, Montana, North Dakota and Texas — also bar most businesses from denying service to those who aren't vaccinated.

“Texas is open 100%, and we want to make sure that you have the freedom to go where you want without limits,” Gov. Greg Abbott said in signing a law against vaccine passports.

The prohibition doesn't apply to the demands employers make on their employees. Earlier this month, a federal judge in Texas threw out a lawsuit from 117 Houston hospital employees who challenged a workplace requirement that they get vaccinated. More than 150 were later fired or resigned for not getting their shots.

In Louisiana, under a Republican-passed bill facing a potential veto from Democratic Gov. John Bel Edwards, public facilities would not be allowed to bar unvaccinated people until the COVID-19 vaccines have received full approval from the Food and Drug Administration. The vaccines for now are being dispensed under emergency FDA authorization.

In May, Louisiana launched a program allowing residents using the state's digital driver's license, LA Wallet, to add a record of their COVID-19 vaccination.

But its reach is still limited. About 105,000 people have activated the COVID-19 verification function. That's about 14% of those with a digital license and less than 4% of Louisiana's 3.1 million people with valid driver's licenses.

Democratic state Rep. Ted James, who wrote the bill creating the digital driver's license, said he has used the feature just once — to show an Uber driver in Nevada that he didn't need to wear a mask. But James said he has never been asked to show it in Louisiana and doubts he ever will.

“Earlier in the year, I felt that at some point we would be limited in travel, going to certain places, unless we had the vaccine,” James said. Now, "I don’t foresee us ever having some type of requirement.”

As a step in reopening, New York in March launched its Excelsior Pass, the first state system to provide digital proof of COVID-19 vaccination or a recent negative test. As of early June, more than 2 million people had gotten the digital pass — about one-fifth of those who have been vaccinated.

At the City Winery, most customers bypass the Excelsior Pass and instead show their paper CDC vaccination cards to gain entry, according to Dorf, who said patrons at the 1,000-person capacity venue "appreciate going into a bubble of safety, knowing that everyone around them is vaccinated.”

“Think of a bar,” said Andrew Rigie, executive director of the New York City Hospitality Alliance. "You have four friends that go in — maybe two of them have it, the other two don’t. You’re going to turn the other two away when small businesses are struggling so much?”

Though most states have shied away from creating digital vaccination verification systems, the technology may soon become widespread nonetheless.

Within months, hundreds of millions of people across the U.S. will be able to access digital copies of their COVID-19 vaccination records, said Brian Anderson, chief digital health physician at the nonprofit MITRE Corp., part of a coalition of health and technology organizations that developed such technology.

People will receive QR codes that can be stored on smartphones or printed on paper to be scanned by anyone seeking vaccine verification. Those who scan the codes won't retain any of the information — a protection intended to address privacy concerns.

The California Chamber of Commerce said it welcomes the state's new vaccine verification system as a way for employers to check on their employees. California regulations require most employees who aren't fully vaccinated to wear masks when dealing with others indoors.

Digital vaccine verification "allows an employer who really wants to make sure the workplace is vaccinated to require that without having the impossible problem of ‘John says he’s vaccinated but he lost his vaccine card. What do we do?’ This solves that issue,” said Rob Moutrie, a policy advocate at the California Chamber of Commerce.