Staying with Barcelona not completely ruled out by Messi 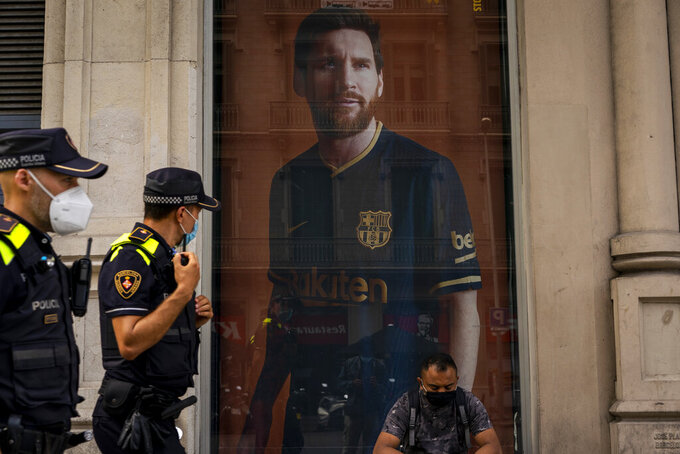 A poster with the face of Barcelona soccer player Lionel Messi is displayed at a F.C. Barcelona store in Barcelona, Spain on Tuesday, Sept. 1, 2020. Barcelona is banking on a face-to-face meeting with Lionel Messi to try to convince him to stay. Talks with Messi’s father-agent are expected this week in Barcelona but the club also hopes to sit down with the player himself. (AP Photo/Emilio Morenatti)

Staying with Barcelona may be an option for Lionel Messi after all.

A day after the Spanish club reaffirmed its position not to facilitate a transfer, Messi’s father-agent did not dismiss the possibility of his son reconsidering his decision to leave.

Jorge Messi left the prospect open after being briefly questioned by the Cuatro television channel on Thursday on whether he was considering the possibility of his son staying for now and leaving for free next year.

The affirmation came a day after there was no agreement in the first meeting between Jorge Messi and Barcelona president Josep Bartomeu. Jorge Messi had said upon arriving in Barcelona on Wednesday that he saw it “difficult” for his son to keep playing for Barcelona.

Jorge Messi later also reportedly spent about an hour and a half at his son's house to talk about the future, but no decision had been announced by the end of the day.

Spanish media showed a video of what it said was Lionel Messi playing padel — a traditional racquet game in Spain — with Barcelona teammate Luis Suárez, his longtime friend who is expected to leave Barcelona after incoming coach Ronald Koeman said the Uruguayan striker was not in his plans.

Lionel Messi last week told Barcelona he was invoking a contract clause that allowed him to leave for free at the end of the season, but the club claimed that the clause had expired in June. Barcelona said it wanted Messi to stay until the end of his contract in June 2021. The contract has a buyout clause of 700 million euros ($837 million).

Barcelona said it has offered the Argentine a two-year extension that would keep him with the club through the 2022-23 season. It also wanted to meet personally with the player to try to convince him to stay and finish his career with the club where he started playing nearly 20 years ago.

Neither part made concessions in Wednesday’s meeting in Barcelona, with Jorge Messi confirming that his son wanted to leave and Barcelona reaffirming that it will not accept his transfer request. They have not scheduled another round of negotiations, but Barcelona said it still hoped Messi would change his mind about leaving.

Messi has yet to speak publicly since the 8-2 loss to Bayern Munich in the Champions League quarterfinals, one of the worst in the player’s career and in the club’s history. The defeat capped a disappointing season for Barcelona, the first without a title since 2007-08.

The player’s representatives claim the clause allowing him to leave the club for free should still be valid because the season was pushed back by the coronavirus pandemic.

“We are trying to find out what is happening, but it's an issue between the player and the club," he said while with the French national team. “We just hope that he stays.”

Real Madrid player Luka Modric said Lionel Messi's departure would be “a big loss” for the Spanish league but Spanish soccer would eventually be fine.

“You have to move on,” he said. “When Cristiano (Ronaldo) left it was the same thing, and life went on without him for Real Madrid. It would be the same for Spanish the league and for Barcelona without Messi.”