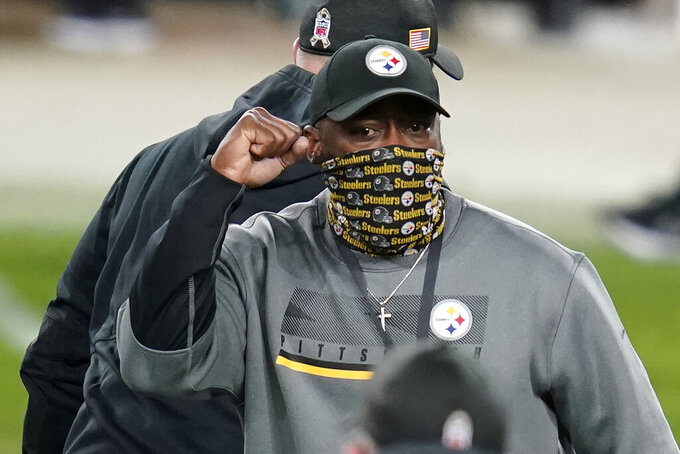 Pittsburgh Steelers head coach Mike Tomlin celebrates as he walks off the field following a win over the Cincinnati Bengals during an NFL football game, Sunday, Nov. 15, 2020, in Pittsburgh. (AP Photo/Keith Srakocic)

“I don’t know that I can say I’m confident of anything in this environment,” Tomlin said. "I got great news today that we had no new positives ... (but) it’s a sensitive situation ... you talk about degrees of confidence and things of that nature, it’s a slippery slope.”

The Steelers (10-0) were supposed to host the Ravens (6-4) on Thanksgiving. A COVID-19 outbreak in Baltimore initially led the NFL to push the game to Sunday. When positive tests among the Ravens continued to pile up, the league postponed it until Tuesday. It's still on ... for now.

While Tomlin has constantly praised his team's diligence to the league's COVID-19 protocols, Pittsburgh has not been immune. The team has placed four players on the reserve/COVID-19 list since Thursday, a group that includes leading rusher James Conner and defensive end Stephon Tuitt. Two coaches — special teams coordinator Danny Smith and quarterbacks coach Matt Canada — will also be unavailable should the Steelers end up playing on Tuesday due to what the team called an “illness.”

Tomlin shrugged off the suggestion that what is happening to the Steelers and Ravens should serve as a message to the rest of the league as winter looms and cases across the world — let alone the NFL — skyrocket.

“We don’t need cautionary tales,” Tomlin said. "We’ve been living this every day. We’ve been tested daily since July 20th. ... We have taken this very seriously, it’s just confirmation of what we already know.”

Maybe, but several players took to social media after the initial postponement from Thursday to Sunday to voice their displeasure. Defensive tackle and longtime captain Cameron Heyward called it a natural reaction.

“We’re all humans, we understand we’re going to be upset,” Heyward said. "We signed up for 16 games no matter where they’re played and I look forward to answering the bell.”

Even if Tuitt and Conner — players who have been important contributors to the best start in franchise history — will be forced to watch from afar. Even if the Steelers aren't really sure who will be in uniform for the Ravens, who have 20 players — including reigning NFL MVP Lamar Jackson and running backs Mark Ingram and J.K. Dobbins — on the reserve/COVID-19 list.

Tomlin declined to express frustration about opponents who struggle to adhere to the league-mandated health protocols. The Steelers were fined $100,000 for mask violations earlier this season. The Ravens are reportedly being investigated for their own COVID-19 violations.

“I am so concerned with our issues and what's going on with us, there are people in place to answer those questions,” Tomlin said. “I'm just working hard to make sure this group upholds its end of the bargain.”

While declining to go into detail, Tomlin stressed his team has gone “above and beyond from day one" in terms of trying to stay safe when away from the club's facility. Still, it hasn't been enough to prevent Pittsburgh from avoiding the widespread impact of the novel coronavirus.

Earlier in the season, Tomlin emphatically said it did not matter what COVID-19 would do to Pittsburgh's schedule, that the club would not use it as an excuse to lose focus.

So far, the Steelers have avoided any misstep in terms of their performance. He doesn't expect that to change and is making an effort to try and stay upbeat. He called the unexpected days off a good thing for a club that didn't receive a traditional “bye” week after the Titans' game was postponed.

“I really think it can be a positive thing if we make it that, and I know that’s our intentions,” Tomlin said. “I know it is for me.”

Heyward pointed out that even a short-handed opponent can be dangerous. Baltimore backup quarterback Robert Griffin III led the Ravens to a victory over the Steelers in the 2019 regular-season finale.

And whatever pent up hostility Heyward's teammates might have for the disruption to their routine should be balanced by the knowledge the Steelers — despite their efforts — are no more immune to the realities of playing in the middle of a pandemic than anyone else.

“We understand we can’t be perfect in this situation,” Heyward said. "The pandemic is not going to allow anyone to be perfect. We just have to be willing to adjust, make things happen on the fly and be ready to play when we get the opportunity to."