Stefanski steady in first season, has Browns in playoff hunt 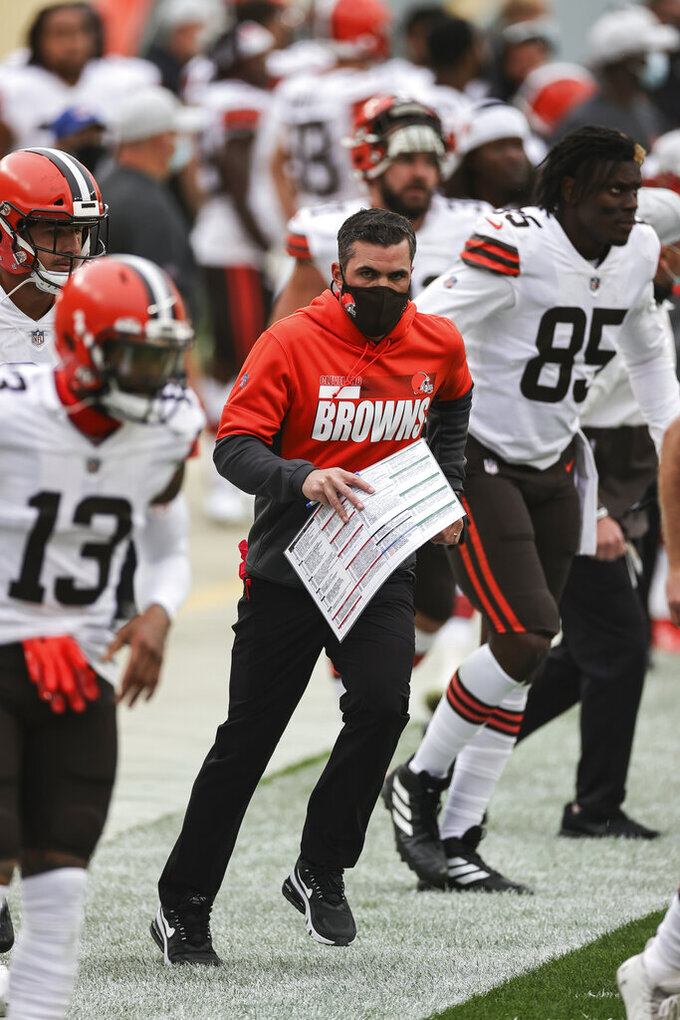 Cleveland Browns head coach Kevin Stefanski runs off the field at halftime during an NFL game against the Pittsburgh Steelers, Sunday, Oct. 18, 2020, in Pittsburgh. The Steelers defeated the Browns 38-7. (Margaret Bowles via AP) 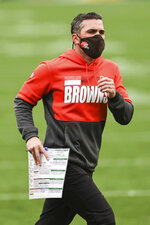 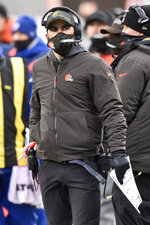 CLEVELAND (AP) — Kevin Stefanski came to Cleveland armed with a coaching plan drawn up over 14 seasons cutting his teeth as an assistant with Minnesota.

With the Browns, he's barely been able to follow it.

Forced to adjust, adapt and in his words “pivot” almost daily around the COVID-19 pandemic and injuries, Stefanski deserves much of the credit for the Browns (5-3) reaching their bye with a winning record and in position to end the NFL's current longest playoff absence.

Stefanski has been unfazed, focused, stable. Those characteristics haven't always been this apparent in a Cleveland coach over the past 20 years.

“I think the most impressive part about Kevin is his poise,” Browns first-year general manager and executive vice president Andrew Berry said last week. "He is genuinely the same guy every single day, regardless of what has happened on Sunday and regardless of what we have dealt with during the day — even keel, same quick wit and sense of humor.

"I think that is the most impressive part because I think all of us ... realize how hard and how stressful his job can be. I think our team is in about as good of hands as we can ask for with Kevin at the helm.”

The coronavirus essentially wiped out the team's offseason training program, turning everything virtual and forcing the Browns — and every team in the league — to huddle on laptops in Zoom meetings and not on the field.

Despite the unprecedented hardship for a first-year coach, Stefanski remained undeterred while conducting his first training camp behind a mask. Stefanski then endured a stunning rash of injuries over a three-day span in August, when rookie and projected starting safety Grant Delpit suffered a season-ending Achilles tendon injury.

The regular season started with a thud. Stefanski, who decided to call plays, opted for a head-scratching fake punt that backfired badly on Cleveland's first possession in the opener at Baltimore and the Browns were completely outclassed in a 38-6 blowout.

The Browns' surprisingly strong first half of the schedule can be put on him as well.

Berry's decision to invest in the offensive line is paying off. Free agent signing Jack Conklin (3 years, $42 million) has solidified the right tackle spot, and first-round draft pick Jedrick Wills has shown promise on the left side.

Cleveland's line has protected quarterback Baker Mayfield (11 sacks so far, 40 in 2019) and the Browns were leading the NFL in rushing before back Nick Chubb sprained his knee last month.

“It is going to be a part of our DNA,” Berry said of the revamped line. “That is a group that we want to make sure is strong and deep for the long term because it really does set a foundation for your offense.”

The defense, from front to back. Cleveland's allowing 29.6 points per game, and the unit gave up 38 to both Baltimore and Pittsburgh, AFC North squads the Browns will see again in the second half.

With the exception of Myles Garrett, the pass rush has been inconsistent and slowed by injuries. The linebackers don't affect the game as much as needed, and while the Browns have forced 14 takeaways, the secondary remains prone to giving up big gains.

“We have had our moments,” Berry said. “But we still have to make more plays.”

Garrett has been sensational. The defensive end has nine sacks, including four strip-sacks, and he's been close on several more. The No. 1 draft pick in 2017 has dealt with a hand/wrist injury since camp and he went into a recent game against Las Vegas with a tender ankle before tweaking his knee.

The Browns might have three fewer wins without him.

Odell Beckham Jr. suffered a season-ending knee injury on Oct. 25 at Cincinnati, a tough blow for the three-time Pro Bowler who was healthy, playing well and admittedly happy about his future in Cleveland. Now it's uncertain.

He'll need nine months to recover and it's not a given that the 28-year-old wideout, who has missed 25 games over the past four seasons with injuries, is part of the Browns' long-term future.

Chubb returned to practice Monday after missing four games, while Mayfield remains on the COVID-19 list after having close contact with a staff member who tested positive. Mayfield could be back by Wednesday. ... RG Wyatt Teller (calf) and TE Austin Hooper (appendix) are also back, making the Browns as healthy as they've been in a month.

16 — Seasons the Browns have finished with six wins or less since their 1999 expansion return.

Stefanski is doing all he can to keep his players' attention from drifting to playoff scenarios. There's too much time left in the season for that. The Browns play their second of three straight home games on Sunday against the Houston Texans (2-6).