Stephen Curry wants to stay with Warriors rest of his career 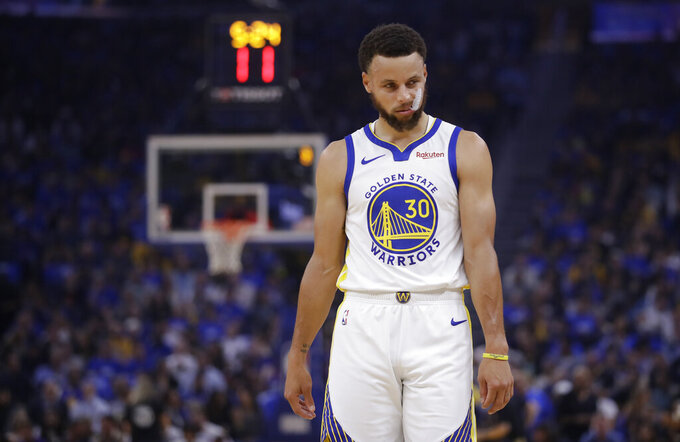 FILE - In this Oct. 24, 2019, file photo, Golden State Warriors' Stephen Curry walks on the court during the first half of an NBA basketball game against the Los Angeles Clippers in San Francisco. The Warriors will play the Brooklyn Nets at home Thursday night, March 12, 2020, in the first NBA game without fans since the outbreak of the coronavirus. (AP Photo/Ben Margot, File)

SAN FRANCISCO (AP) — Stephen Curry wants to play until he's 40, perhaps even beyond. And he wants it to be with the Golden State Warriors the entire way.

Curry said discussions have begun with the team about a contract extension and he is “fully committed.” The two-time NBA MVP signed a $201 million, five-year contract in July 2017 that initially was the richest ever, until James Harden topped it with a $228 million extension from the Rockets.

“Everything's on the table right now,” Curry said. “... It’s a matter of just letting things kind of play out the way that they should. That's kind of where we're at right now.”

The 32-year-old Curry is entering his 12th NBA season — and he always aimed to play 16 years in the league, just like father Dell did.

“That was always the goal,” Curry said Monday on a Zoom call with reporters following the first day of training camp. “Now it's just more so listen to your body. Who knows. You can't predict the future. I've always said I want to play as long as I can play at the level I want to be at and hopefully you can be in that position where you end it on your own terms. Whatever that means, hopefully that is closer to 40."

Curry likes what the Warriors did this offseason to build another title contender after an NBA-worst 15-50 showing during the shortened 2019-20 season, when he was limited to five games because of a broken left hand. That was tough to see after five straight trips to the NBA Finals, so a commitment to winning every season is a must — and “I want to be a part of it,” he said.

“Wearing the same jersey for as long as I can, that’s a huge goal, for sure. It’s an elite club of guys that you look at that have played with the same organization and been successful and achieved greatness in that respect,” said Curry, who turns 33 in March.

“That would be an awesome accomplishment, something I’ve obviously spoken publicly about and very committed to. But that also goes with there’s a lot more to be accomplished on the court and again I can’t fast forward to what the end is going to be. Enjoy the moment, enjoy the challenges that we have in front of us and what I have left to accomplish as a player.”

And when he tells wife Ayesha he wants to play until he's 40?

“I have a floating target on that, for sure. Any time I say I want to play up to 40 she'll definitely give me a little look,” Curry said.

Curry was due to make $43 million this season — his salary is expected to be affected by the coronavirus pandemic — and nearly $45.8 million in 2021-22.

“I’m blessed to be in this position and hopefully the conversation every year as I do get into that age you see other guys in the league that are always in that conversation of competing for championships," Curry said. "That’s what you want to hold onto for as long as you can.”

While coach Steve Kerr didn’t confirm their positive test results, he made it clear they were the only two to miss practice. General manager Bob Myers acknowledged last week two players had tested positive for COVID-19 without providing names and they would be out at least 10 days before testing again, saying: “I don’t think this is unexpected with all the guys coming back in. Kind of proves the protocols and testing are working."

“I’m not allowed to comment. You can make your own deductions. I know it’s really tricky,” Kerr said. "... I’m just trying to figure out which one of you has put all of the pieces together and figured out what’s happening here and if there’s anybody on the screen who hasn’t figured it out yet. I think you guys all got it.”