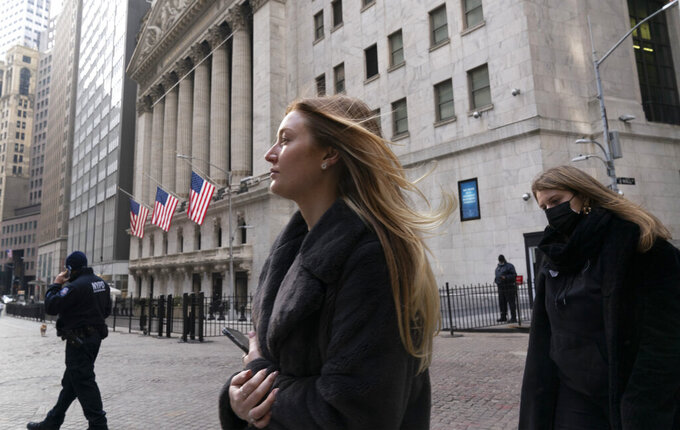 FILE - In this Wednesday, Jan. 13, 2021 file photo, people walk by the New York Stock Exchange. Stocks are off to a mixed start on Wall Street as another sharp rise in bond yields unsettled investors. Technology stocks were among the biggest losers in the early going Friday, March 121 pulling the Nasdaq down 1.5% while the broader S&P 500 index gave back 0.5%. (AP Photo/Mark Lennihan, File)

The S&P 500 rose 0.1% after having been in the red for most of the day. The benchmark index also notched its second straight weekly gain. Financial and industrial companies led a broad rally, outweighing the slide in technology and communications stocks.

The Dow Jones Industrial Average and Russell 2000 index of smaller company stocks also hit all-time highs for the second day in a row. The tech-heavy Nasdaq composite fell, shedding some of its gains from a day earlier.

The bond market was the dominant force in pulling tech stocks mostly downward, because as yields push interest rates higher, they make high-flying stocks look expensive. After remaining stable for most of the week, the yield on the 10-year Treasury note jumped to 1.62% from 1.52% a day earlier. Investors had sold off stocks late last week after that yield crossed above the 1.60% mark.

“Bond investors are trying to determine how much future growth is in the economy and what that means for inflation,” said Chris Zaccarelli, chief investment officer for Independent Advisor Alliance. “It could be over the course of this year or the next couple in terms of trying to find the right level.”

The stock indexes were mostly lower for much of the day as technology stocks, which had spent most of the week holding steady or climbing, fell broadly as bond yields rose.

Apple fell 0.8%, Facebook dropped 2%, Google's parent company slid 2.4% and Microsoft lost 0.6%. These giant tech companies soared last year as investors bet that pandemic-quarantined Americans would spend even more time online. But as the pandemic eases this year, and bond yields rise, more expensive stocks such as these have struggled.

The increase in bond yields comes as President Joe Biden signed into law the $1.9 trillion stimulus plan, which will include $1,400 checks for most Americans as well as additional payments for those with children or those who collected unemployment benefits last year. President Biden also laid out a plan, in a primetime speech Thursday, to expand vaccine eligibility to all Americans by May 1.

These moves have given investors confidence that the U.S. and global economy will likely experience a strong recovery in the second half of the year as well as potentially increase the rate of inflation.

Wall Street got another sign Friday that inflation is creeping higher. The Labor Department said its producer price index, which measures inflation before it reaches consumers, rose by 0.5% last month following a record jump of 1.3% the month before. Over the past year, wholesale prices are up 2.8%, the largest 12-month gain at the wholesale level in more than two years.

Some economists fear that inflation, which has been dormant over the past decade, could begin to rise under the extra demand generated by the government’s new $1.9 trillion stimulus package signed into law Thursday. Others disagree, pointing out that there are 9.5 million fewer jobs in the American economy than there were before the pandemic hit a year ago, and argue that unemployment will keep a lid on inflation.

Meanwhile, shares of big banks have climbed. Banks are often a proxy for a broader economy, as the ability for borrowers to repay debts matters to banks’ balance sheets and higher interest rates means they can charge more to borrowers. The KBW Bank Index of the 24 largest banks rose 1.7% and is up 26% this year.

Investors got another piece of data that showed that American consumers are feeling increasingly confident about returning to normal, and hopefully returning to their old spending habits. The University of Michigan consumer sentiment index for March came in at a reading of 83.0, well above the reading of 80.0 that economists had expected.