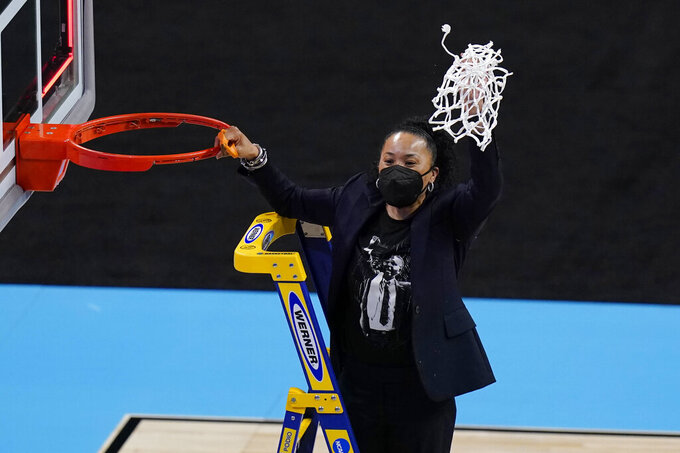 South Carolina head coach Dawn Stanley cuts down the net after the team's win over Texas in a college basketball game in the Elite Eight round of the women's NCAA tournament at the Alamodome in San Antonio, Tuesday, March 30, 2021. (AP Photo/Eric Gay) 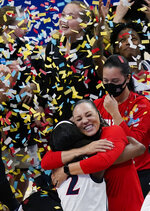 Dawn Staley of South Carolina and Arizona's Adia Barnes will make history Friday night when their teams tip off in their national semifinals.

The other two coaches in the Final Four couldn't be happier for them, or the future of women's basketball.

“They've paid their dues, and they're tremendous role models for all the women in the game, but maybe especially the women of color in our game,” Stanford coach Tara VanDerveer said Thursday. “To see two women in the Final Four, you know Black women, it's fantastic.”

UConn coach Geno Auriemma said Barnes and Staley are just the tip of the iceberg as players start coaching and put their spin on the game.

Barnes and Staley are two of only 13 Black women who coached in Power Five conferences this season.

While there is more work to done to address the diversity deficiency, C. Vivian Stringer told Staley and Barnes she was proud of them, writing in a card that she had dreamed of this day. Staley shared the note on Instagram. Barnes called the package from Stringer meaningful and touching.

“She’s one of the first that put black female coaches on the map and she’s done so many things, one of the most successful in the business,” Barnes said. "So to receive something like that from her means a lot to me.”

Carolyn Peck became the first Black woman coach to win a national title in 1999 with Purdue, and Staley won a title in 2017. Stringer coached in the first NCAA national championship game in 1982 and led two other teams to the Final Four. Pokey Chatman coached LSU in back-to-back berths in 2005 and 2006.

The Alamodome has a new court for the Final Four with logos. The food now features more of a buffet for the four remaining teams, and they even got police escorts to practice Thursday.

But there is no getting around the muffled atmosphere because of the coronavirus pandemic.

Stanford coach Tara VanDerveer said it's muted with not many people around. They also didn't get send-offs from pep bands because the four teams are going into their third week in San Antonio.

“It is very different,” VanDerveer said. "But regardless of that, we are thrilled to be here and we are really, really excited to be playing in the Final Four, and we’re really thankful that there is one.”

UConn coach Geno Auriemma has found some positive aspects to the restrictions.

Nobody had a quick turnaround or travel after clinching their berth, which Auriemma said allowed more time for practice than usual.

“Believe me, there are a lot of things that happen at the Final Four that you can do without,” Auriemma said. “And, you know, I don’t miss those things one bit.”

“I hope I'm confined for another four days because this is the pinnacle of our game,” Staley said. “This is what we practice, we sacrifice, what we cry for, what we work for, and if it doesn't feel like a Final Four, you're in the wrong place.”

South Carolina coach Dawn Staley had a message for 2020 WNBA MVP A'ja Wilson on Thursday when she talked to reporters: Where's my candle?

Wilson, who helped Staley and the Gamecocks win the 2017 national championship, is in San Antonio training with the USA Basketball national women's team. Staley's movement remains limited due to COVID protocols, so the U.S. Olympic coach can't run any of the practices.

Staley bragged on how Wilson isn't just a basketball player, pointing out how her former 6-foot-5 All-American has started a foundation dedicated to dyslexia and is also an entrepreneur starting a candle business. But then Staley jokingly chastised Wilson for missing a marketing opportunity by not giving her former a coach a chance to promote that business on social media.

“It could be sold out by the time she rolled it out, but she’s not thinking that way,' Staley said. ”So A’ja, get with get with the program. I asked for a candle, a candle should have been here. I should have been enjoying it in my room of confinement.”

DUNKING AT THE FINAL FOUR?

Only two women have ever dunked in an NCAA Tournament game, and none at the Final Four.

There are at least a couple of players in San Antonio who have dunked in their careers, including one in December, who could become the first.

South Carolina forward Laeticia Amihere is the first Canadian woman ever to dunk in a high school game, throwing one down in 2017 as a 15-year-old from Mississauga, Ontario. She isn't promising a dunk on Friday night.

“I really can’t tell you,” Amihere said. “It depends on the situation.”

Stanford forward Fran Belibi dunked against California in December. She joined Parker as the only women to win the dunk contest at the McDonald's All-American game in 2019.

UConn players say they are excited to have another member of their team in San Antonio for the Final Four.

Daniela Ciriello of Southington, Connecticut, joined the team as a 6-year-old during the 2018-19 season through Team Impact, which pairs children fighting serious health battles with athletic teams. Ciriello, who center Olivia Nelson-Ododa refers to as a “little ball of energy,” suffers from a rare blood disorder requiring monthly transfusions.

Evina Westbook said it’s been tough not being able to interact with Ciriello in person during the pandemic. The Huskies have checked in with her often on Zoom and are thrilled the university and Team Impact arranged to fly her and her family down for the Final Four.

“She’s a gentle reminder, life is just so precious,” Westbrook said. “I feel she’ll also give us another source of energy.”