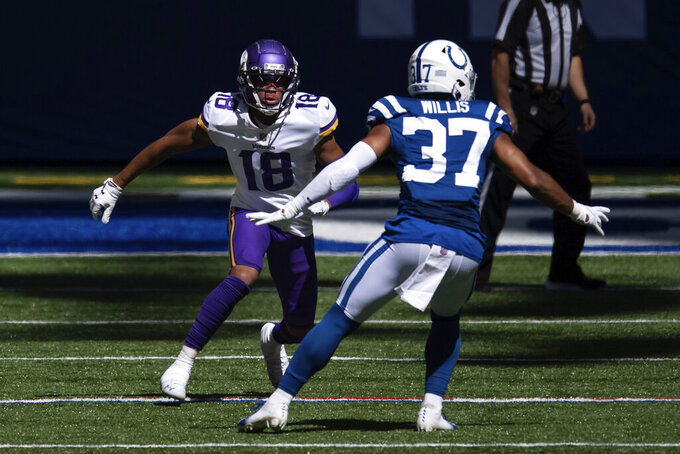 His first two professional games with the Minnesota Vikings have been about as defeating as a player could experience in the sport.

After going 34-7 in three years with the Tigers, who won the national championship in 2019, Jefferson has found himself not only on the beginning of the learning curve for an NFL offense but dealing with the unfamiliar feeling of inferiority on the field.

The Vikings still have plenty of their schedule left to play, but they've been soundly beaten by Green Bay and Indianapolis over the first two weeks of this strange pandemic season.

“We’ve just got to bounce back and find that energy that this organization has been having for the last couple years,” said Jefferson, the 22nd overall selection in the draft.

LSU never had a losing streak while the dynamic wide receiver was with the program. Neither did Destrehan High School, where he went in suburban New Orleans. Now a Vikings team that has not posted a losing record since coach Mike Zimmer's debut season in 2014 has dug a deep hole with a pair of troubling performances on both sides of the ball.

The biggest issue for the offense, which ranks last in the league in time of possession, is identifying another pass-catcher or two who can alleviate the attention and burden on wide receiver Adam Thielen. That's where Jefferson, who was conveniently acquired with the pick the Vikings obtained in the trade that sent dissatisfied wide receiver Stefon Diggs to Buffalo, comes in.

Jefferson has been targeted six times for five receptions, 70 yards and three first downs, one sign that the Vikings — from offensive coordinator Gary Kubiak to wide receivers coach Andrew Janocko to quarterback Kirk Cousins — have been guiding him both gradually and intentionally.

“I think it’s the right thing to do with him. I think you’re going to see more and more of him,” Kubiak said, adding: “Much like Adam, you want to get touches for those type of football players, and with the amount of plays we’ve been running, touches are hard to come by.”

The struggles of the Vikings on offense have been more pronounced considering Diggs has an NFL-high 239 receiving yards and the Bills are unbeaten. The Vikings, though, have no choice but to be patient with Jefferson's progress as they try to keep the season from spiraling away.

“It’s just up to the other receivers to go out there and make those big plays and to get open,” said Jefferson, who has taken the third-most snaps in his position group behind Thielen and Bisi Johnson.

Cousins downplayed this week the significance of the lost practice time to the pandemic, but the first two games have appeared to reveal a lack of connection and trust between the ninth-year veteran and his wide receivers not named Thielen. As Kubiak noted on Thursday, though, Jefferson has been on the field for a grand total of two NFL games.

“I’m excited for him to get more opportunities to show what he can do," Thielen said, "and show what he showed us all through training camp.”

Jefferson is healthy, at least, unlike several of his teammates on defense.

With defensive end Danielle Hunter and outside linebacker Anthony Barr on injured reserve, Barr with a season-ending torn pectoral muscle, the Vikings are already missing two of their best players. Their lineup could be even further depleted against the Titans.

Rookie Troy Dye, a potential replacement for Barr, was placed on injured reserve on Thursday with an ankle problem. Cornerback Mike Hughes has not practiced this week because of an unspecified neck injury; whether his absence is connected to broken vertebrae that kept him out of the playoffs last season was unclear. Cornerback Cameron Dantzler was held out against the Colts because of a rib injury and has not practiced this week, either. Backup cornerback Kris Boyd (hamstring) appeared on the injury report on Thursday.

The Vikings signed seven-year veteran linebacker Todd Davis to help fill the void created by Barr's absence. Released by Denver on Sept. 4, Davis has played in 85 regular-season games, primarily with the Broncos. He was tied for eighth in the NFL last year with a career-high 134 tackles.