Stunts in the streets for Venezuelan motorcycle virtuoso 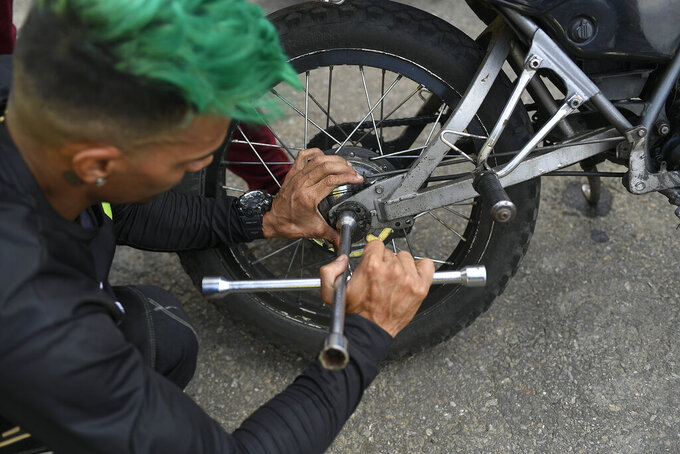 Motorcycle stuntman Pedro Aldana fixes his brakes during an exhibition in the Ojo de Agua neighborhood of Caracas, Venezuela, Sunday, Jan. 10, 2021. The 33-year-old makes a living with his shows, inspiring his young fans who flock to his shop, where he teaches them to change the oil and tune up their bicycles. (AP Photo/Matias Delacroix)

CARACAS, Venezuela (AP) — If police aren't shutting down his street shows for lack of permits, Venezuelan motorcycle trick rider Pedro Aldana is battling coronavirus quarantines or the tropical rains that turn the asphalt slick and send fans running for cover.

Despite life's obstacles, Aldana — a natural-born showman who performs in wild checkered clothes and dyed green hair — has kept up his performances, which draw hundreds of people to unused parking lots or obscure city streets.

“This is my hobby, my art," said Aldana, who is leading a movement to win official recognition of motorcycle acrobatics in Venezuela — a sport nurtured in poor neighborhoods like his, where he sometimes mentors young fans in basic mechanics. "This is my passion and my work.”

Aldana, who goes by the show name “Pedro Locura,” Spanish for “Crazy Pedro,” is joined by a loyal crew of likeminded daredevils for occasional exhibitions of speed, agility and precision balance.

The swarming motorcyclists do wheelies at high speed, often standing on one foot or a knee from the seat or the back foot peg. Sometimes a young woman stretches out on the seat in a show of her trust for the rider's skills.

In other maneuvers, they turn tight circles in a group, each rider hopping from a normal seated position to sidesaddle while the front wheel is sky-high.

It's a sport on the rise in Venezuela, where many take pride in the motorcycles they depend on to get to work or earn them a living making deliveries.

Aldana said he won his nickname as a youth mastering tricks on his bicycle. By age 11, he'd graduated to a motorcycle.

For the last decade, he's been travelling across Venezuela to put on shows drawing up to 7,000 spectators. The troupe charges spectators $3 to $5 to enter the organized shows — hefty in a country where most earn a monthly minimum wage less than $2.

The coronavirus pandemic, however, has kept him from touring far from his home in Venezuela's capital.

He's been forced to hold improvised pop-up shows advertised by word of mouth, playing a cat-and-mouse game with officials. On social media, he encourages spectators to wear facemasks and practice social distancing, though in practice that appears to be optional.

On Saturday, Aldana’s crew converged on a parking lot of cracked asphalt in the coastal city of La Guaira, only to be stopped by by local police, who said they didn’t have permission. Aldana says he’s worked official channels in the past to get permission, but has been frustrated by bureaucrats demanding bribes.

“I tell the police that this is a sport, that they should understand and work with us,” he said. “We’re doing something healthy and positive.”

On Sunday, squad of soldiers blocked another planned show in a poor Caracas neighborhood before it could start. Aldana responded by leading a caravan of several hundred motorcycles — performers and spectators alike — in a mad dash across Caracas into the sprawling and scenic barrio of Petare.

They took over a narrow street with a steep incline, dodging cars and buses, for a sort of pirate performance free of charge. Then the rain started and the show was over.