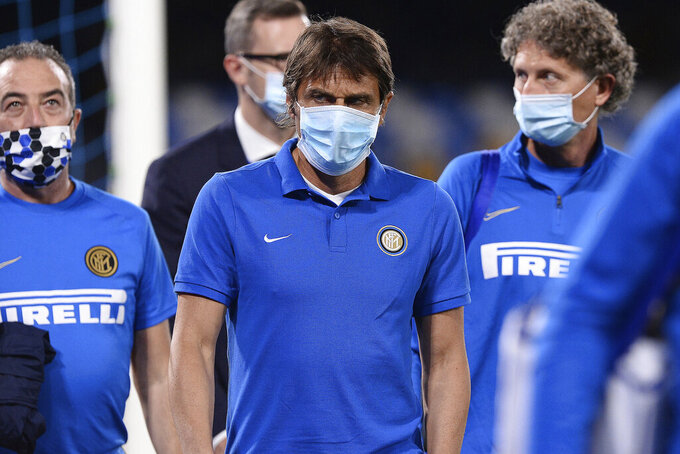 Inter Milan coach Antonio Conte, center, wearing a face mask, enters the pitch prior to the Italian Cup second leg semifinal soccer match between Napoli and Inter Milan, at the Naples San Paolo Stadium, Italy, Saturday, June 13, 2020. The match is being played without spectators because of the COVID-19 restriction measures. (Cafaro/LaPresse via AP) 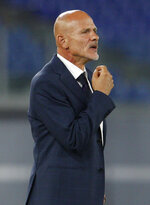 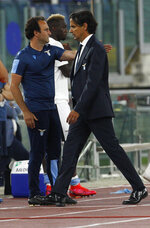 ROME (AP) — Tommaso Berni, Inter Milan’s third-choice goalkeeper who hasn’t played in six seasons with the club, was sent off the bench for a “disrespectful outburst” during Sunday’s game at Parma.

Others booked or sent off include an assistant coach for Juventus and the sporting directors of Cagliari and Brescia.

In stadiums free of fan noise, Serie A’s referees have been targeting a wide array of bench members with disciplinary action.

“I’m sorry. It hadn’t happened in 2 ½ years,” Inzaghi said after invading the pitch during the frenetic finish of Lazio’s 2-1 win over Fiorentina on Saturday.

“I was trying to help the referee because there was a bit of chaos, but I wasn’t disrespectful. I just entered the field.”

But when referee Luca Banti sent Inzaghi off, the coach responded, “No, no. I won’t go.”

Inzaghi later explained, “I didn’t understand that I had been sent off.”

With stadiums empty of fans due to the coronavirus pandemic, TV cameras and microphones have been picking up nearly everything that players, coaches and bench members are saying.

Even when the benches have been moved to the first few rows of the stands, as in Parma when Berni was singled out by the fourth official during the second half, referees can still hear everything.

It was the second time this season that Berni was sent off from the bench, and this time, at least, it seemed to motivate his team. Inter promptly scored twice to erase an early deficit and produced a 2-1 comeback win.

Plenty of players on the field are also seeing red cards. Moments after Berni’s outburst, Parma was reduced to 10 men when midfielder Juraj Kucka was sent off for protests. Kucka then became even angrier and had to be dragged down into the tunnel by club officials. Besides being suspended for a game, Kucka was also fined 10,000 euros ($11,000).

Fiorentina, which has been at odds with the referees in both of its matches since the restart, had defender Martín Cáceres and coach Iachini both punished for profanity during a 1-1 draw with Brescia.

After Fiorentina’s loss to Lazio, which included a controversial penalty awarded to the Roman club, club president Rocco Commisso suggested that teams should be able to appeal decisions to the VAR.

“I wouldn’t have anything against it,” said Nicola Rizzoli, Serie A’s refereeing director. “But we’ve got to remember that we’re part of a worldwide game. The rules need to be the same in Italy and abroad. At the moment this isn’t being discussed at the international level.

“Maybe it should be tried but we can’t make sudden, personalized decisions,” Rizzoli added.

BEST IN THE WORLD

AC Milan technical director Paolo Maldini offered a strong suggestion that the club will renew Gianluigi Donnarumma’s contract before it expires at the end of next season.

The 21-year-old goalkeeper has already taken over the starting position on Italy’s national team from Gianluigi Buffon.

“Milan needs to try and keep a player of Donnarumma’s importance,” Maldini said before Milan’s 2-0 win over Roma on Sunday. “He started in our youth system and and in my modest opinion he’s the best goalkeeper in the world.”

However, Donnarumma already earns 6 million euros ($6.7 million) per season and Mino Raiola, his agent, will be expecting a big salary increase that financially strapped Milan may not be able to afford.