SUPREME COURT NOTEBOOK: Audio arguments, with a side of fish 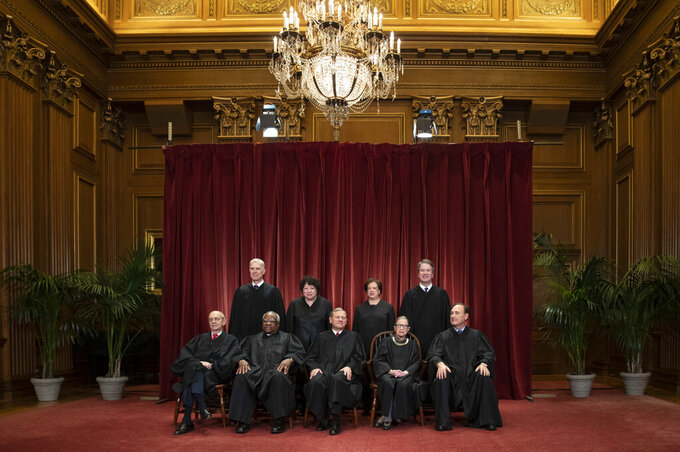 “We don't know the cases will come to us. We've learned it's best, and I've learned over time, deal with the case when it comes up, don't deal with it on the basis of what's said in a newspaper,” Breyer said during a conversation Thursday arranged by George Washington University and streamed on Facebook.

Breyer, a dissenter in the Bush v. Gore case that essentially settled the disputed 2000 presidential election in favor of Republican George W. Bush, spoke from a bedroom in his home in Cambridge, Massachusetts. And, yes, the bed was made. But when Breyer and his colleagues resume hearing arguments in October, the public won't be able to see them.

The court announced Wednesday that it will start its new term next month the way it ended the last one, with arguments by telephone and live audio available to the public because of the coronavirus pandemic.

Breyer on Thursday explained the reason for doing audio only. Breyer said the court is concerned about security, particularly potential disruptions from the outside, including hackers.

“I think that’s what’s led us to be pretty cautious,” he said, adding that the justices have been conducting their private conferences by telephone, too.

Instead of the free-for-all style of courtroom arguments, when the justices heard arguments by phone they asked questions in order of seniority, with each justice getting two minutes each. How did Breyer think it went?

Breyer says there are advantages to holding arguments by phone.

“It makes you listen. You have to listen more closely,” he said.

But Breyer says there are minuses, too. There's less dialogue, for example, he said.

Justice Neil Gorsuch, who took part in a different online event Thursday, said the court's meetings by phone have generally worked well, though they've produced some confusion, too.

“Nine people on a conference call” has it challenges, including not being sure when others have finished speaking, Gorsuch said during a National Constitution Center forum to mark the 233rd anniversary of the signing of the Constitution.

Unlike Breyer, Gorsuch was in his wood-paneled office at the court, with flags of the United States and his native Colorado behind him.

Gorsuch had a white beard, though whether it counts as a pandemic beard or a summer recess beard was a matter of some online debate. Not that there's much difference these days because the court will continue its remote meetings at least for October.

When they meet again in person, Gorsuch predicted the justices probably would skip their traditional handshakes in favor of less germ-exchanging elbow bumps.

The court's youngest member, at 53, Gorsuch had praise for the eldest justice, 87-year-old Ruth Bader Ginsburg, who was being honored Thursday with the Constitution Center's Liberty Medal.

“No one deserves it more richly than Ruth," Gorsuch said. “She has served this country as a judge for 40 years,” since her appointment as an appeals court judge by President Jimmy Carter.

Ginsburg, who is being treated for cancer, was not taking part in Thursday's event, court spokeswoman Kathy Arberg said.

Breyer, Ginsburg, Gorsuch and Justice Sonia Sotomayor all have suggestions for people looking for something different to cook during the pandemic.

They provided recipes for a free digital cookbook put together by the American Bar Association and released last month. “The Nineteenth Amendment Centennial Cookbook: 100 Recipes for 100 Years" is a nod to cookbooks published by suffragists a century ago as they worked to give women the right to vote.

Sotomayor explains her “Fast and Easy Dressed-up Fish.” Ginsburg, who has often said she's a terrible cook, contributes veal and ratatouille recipes that her late husband made.

Breyer dishes up his salmon with olive oil, lemon and leeks, and then shows how to turn it into lunch the next day: just add mayonnaise, more lemon and hot sauce and mix with a fork. Also included: his pot roast recipe.

Gorsuch offers up his recipe for “Colorado Green Chili Stew.” “Few things remind me more of home than standing outside roasting chili peppers on a crisp fall day,” he writes.

Dinner, if not justice, is served!