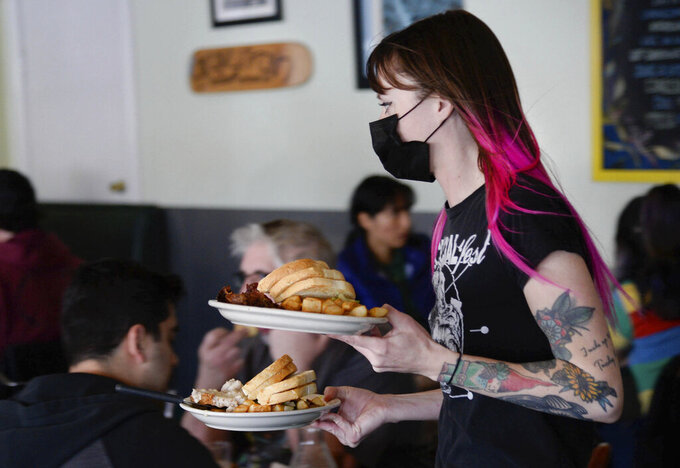 Leslie Powers delivers breakfast plates at Salt Lake City's Blue Plate Diner on Friday, March 12, 2021. The owners recently announced they will be closing on May 4, after 20 years in business. A new development is going in on the corner that is forcing it to shut down. (Francisco Kjolseth/The Salt Lake Tribune via AP)

SALT LAKE CITY (AP) — Nearly 16% of Utah women have withdrawn in some way from the workplace during the coronavirus pandemic, new data shows.

And when you think about that in terms of the state’s population, said Susan Madsen, founder and director of the Utah Women and Leadership Project at Utah State University, that’s “thousands and thousands of women.”

Of Utah women surveyed by the project in January, 2.4% left the workforce completely and 2.8% took a leave of absence, the Salt Lake Tribune reported. Women commonly said they left jobs because their employer had to close or faced some type of financial hardship (4.4 out of 10); or because they had to care to care for children, the elderly or people with disabilities (1.4 out of 10).

Some (0.6 out of 10) said they quit because they either caught COVID-19 or were afraid of catching or spreading the virus. Northern Utah had a higher percentage of such women, compared to other regions. And Davis County had a higher percentage of women who stopped working “because their employer was impacted or closed due to pandemic restrictions.”

Other women downshifted — 4.9% moved from full-time to part-time work, 4.4% switched to less demanding jobs and 1.4% became an independent contractor rather than employee.

Meanwhile, 12.2% took on additional responsibility, such as moving from part-time to full-time or taking on more jobs, the report shows.

Earlier this year, Vice President Kamala Harris called it a “national emergency” that women have experienced a disproportionate impact in job losses during the coronavirus pandemic, with more than 2 million women leaving the workforce.

The new Utah findings are based on a survey of 3,542 women in the state, age 20 and older. And they show women in the Beehive State have faced the same stressors as their peers across the country, Madsen said.

“It just confirms, yes, women in Utah are being impacted in very life-changing ways,” she said.

The brief published Tuesday by the Utah Women and Leadership Project is the first in a series looking at how women here have been affected by COVID-19 in terms of job loss, changes at work, burnout, financial stress, and concerns about domestic violence, among other topics.

Despite having such a “large sample,” though, it’s likely that “some of the women that were most strongly impacted didn’t have the emotional energy” or time to participate in the survey, Madsen said.

The brief notes that women of color and those with less formal education, lower incomes and from certain industries were under sampled. Still, it provides a good benchmark, she said.

Utah women have lost twice as many jobs as men (8,000 vs. 4,000), as female-dominated industries have felt the brunt of losses, according to a two-page brief released in March from the Kem C. Gardner Policy Institute.

Aside from that report and weekly unemployment numbers, though, there hasn’t been much information to gauge how Utah women, specifically, have fared during this “shecession,” until now.

Women working in manufacturing (27.3%), food services (26.1%) and hospitality and tourism (25%) industries reported the biggest decrease in income, while food service workers also saw the highest increase in the numbers of hours they worked.

When asked whether they were regularly worried about money, “most women responded with ‘neutral,’ or they slightly disagreed,” the brief states. Researchers suggested that could be because by the time the survey was done in January, almost a year into the pandemic, most women may have found a new job, felt supported by federal relief money from the CARES Act or did not feel as affected “because of the strong Utah economy.”

The report did show, though, that “overall, white women reported less financial worry than women of color.” And while women with lower household incomes had the highest percentages for worries about money, food and housing, “there were still women in higher income groups that have been worried” about these issues during the pandemic, it said.

Across the board, Utah women “reported that they are burned out,” while, “at the same time, they have ‘some’ hope for the future,” researchers wrote.

Initially, that surprised Chris Hartwell, an assistant professor of management at USU, who was one of the authors of the report. He thought findings would vary more, he said, depending on a person’s age, job or where they lived.

But “after I thought about it, I was like, ‘Yeah, I can understand that ... it doesn’t matter what your situation is — everybody is feeling burned out,’” Hartwell said.

What also stood out to Hartwell and Madsen was that women who now work from home because of the pandemic, or who work both from home and at the office, were more likely to say their mental health has declined than those who continued to work at an onsite location.

“That’s something that companies need to be aware of, that there may be these unintended consequences of having remote work,” Hartwell said.

While working from home offers flexibility, Madsen said, it can also be a big adjustment, as people get used to different technology and “the way they work in isolation.”

Meanwhile, parents have dealt with shifts in child care and schooling during the pandemic. Roughly a third of women who were working prior to March 2020 said they had to adjust their schedule “because children in their household had to attend school online from home” last year, the study shows.

Even people who don’t have children have had to adapt to different social interactions over Zoom or Microsoft Teams, according to Madsen.

“There’s not those conversations that are natural when you run into people in the hall and you say, ‘Hey, how are you doing? What’s going on?’” she said.

As people continue to work remotely in the future, management needs “to take some initiative and to establish good modes of communication for their team and find ways to improve,” Hartwell said. Employers also have to recognize that “one size is not going to fit all, particularly in a pandemic.”

“Clearly, the COVID-19 pandemic has had a profound impact on women at work,” the report states, and the effects “may be felt for years to come.” But there are things Utahns can do to help, researchers said.

While the women surveyed said their employers provided more flexibility with where and when they worked, as well as free mental health counseling and more paid sick leave during the pandemic, “there is significant room for improvement in the support organizations offer their employees,” the brief states.

“Research shows that offering family-friendly policies has a positive impact for the entire community, and it increases diversity, productive and job satisfaction for employees,” according to the report. “Organizations can also actively recruit women who have left the workplace during the pandemic...”

One important finding for Madsen was that 9.2% of women surveyed said they “were concerned about domestic violence brought on by the pandemic.” Meanwhile, domestic violence shelters in the state have seen more people seeking services over the last year.

“That confirms ... that domestic violence is a real problem,” Madsen said, not just across the country, but in Utah, where rates are above the national average.

According to the report, “this is a sizeable number of women, and their concerns should be addressed” by community organizations, law enforcement and government. This includes prevention education and support services, as well as resources for those experiencing food insecurity, housing challenges and financial stress, the brief said.

Researchers also called on Utah state and local governments to “implement policies that benefit women’s recovery from the negative impact of COVID-19 and positively affect women in the future.”

“These include public policies that focus on narrowing the gender pay gap; increasing investment in training and up-skilling opportunities that support women, including return-to-work initiatives; providing incentives that encourage businesses to implement family-friendly and inclusive policies; and providing more support for child care offices and programs around the state,” the report states.

Gov. Spencer Cox acknowledged how “women have been particularly hard hit during COVID-19″ at his weekly press conference Thursday.

“We’ve talked a lot about the health impacts of this pandemic, but we know for sure that there economic impacts, as well,” Cox said.

He added, “We have a lot of work to do in Utah always, but especially coming out of this pandemic, as women have been disproportionately affected.”

Becky Jacobs is a Report for America corps member and writes about the status of women in Utah for The Salt Lake Tribune.