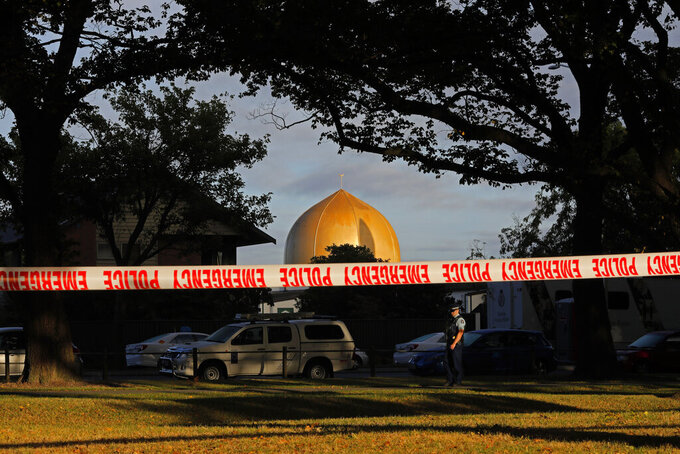 FILE - In this March 17, 2019, file photo, a police officer stands guard in front of the Masjid Al Noor mosque in Christchurch, New Zealand, where one of two mass shootings occurred. More than 60 survivors and family members will confront the New Zealand mosque gunman during the four-day sentencing starting Monday, Aug. 24, 2020. Twenty-nine-year-old Australian Brenton Harrison Tarrant has pleaded guilty to 51 counts of murder, 40 counts of attempted murder and one count of terrorism in the worst atrocity in the nation's modern history.(AP Photo/Vincent Yu, File)

WELLINGTON, New Zealand (AP) — When Aya Al-Umari faces her brother's killer in the dock, she intends to tell him that his hatred stole away her best friend, her guardian, her hero. That she still wants to pick up the phone and tell her brother all about her day, because he's the only one who would understand.

Al-Umari is one of more than 60 survivors and family members who this week in court will confront the white supremacist who committed the worst atrocity in New Zealand’s modern history, when he slaughtered 51 worshippers at two Christchurch mosques in March 2019.

The gunman, 29-year-old Australian Brenton Harrison Tarrant, pleaded guilty in March to 51 counts of murder, 40 counts of attempted murder and one count of terrorism — the first terrorism conviction in the nation’s history.

Tarrant has dismissed his lawyers and intends to represent himself during the four-day sentencing starting Monday, raising fears he could try to use the occasion as a platform to promote his racist views. He can choose to speak once the victims have spoken, although the judge will likely shut down any attempts he makes to grandstand.

The attacks targeting people praying at the Al Noor and Linwood mosques shocked the nation and prompted new laws banning the deadliest types of semi-automatic weapons. They also prompted global changes to social media protocols after the gunman livestreamed his attack on Facebook, where it was viewed by hundreds of thousands of people.

Some victims have traveled from abroad to attend the court hearing and have completed a mandatory 14-day quarantine imposed because of the coronavirus.

Virus distancing requirements mean the number of survivors in the main courtroom will be limited to 35 at any one time. But the hearing will also be streamed to seven adjacent courtrooms, which can hold another 200 or so people.

Judge Cameron Mander said he realized the court process had been “exhausting and frustrating” for many of the victims. “Finality and closure is considered by some as the best means of bringing relief to the Muslim community,” he wrote in a court memo.

Mander is not allowing live reporting from the sentencing and has reserved the right to ban some things that are said in court from being broadcast or published. The victims also can choose to remain anonymous.

Prime Minister Jacinda Ardern, who was praised around the world for her empathy and leadership after the attacks, said she would be monitoring the hearing closely. She said the sentencing would be hard for the victims.

“I don’t think there is much that I can say that is going to ease just how traumatic that period’s going to be," she said.

Andrew Geddis, a law professor at the University of Otago, said the case was unprecedented in New Zealand, both in the magnitude of the crime and the number of victims involved in the sentencing.

He said it was likely the judge would impose the first all-of-life sentence, with two possible mitigating factors being Tarrant's guilty plea and his young age. Geddis said if Tarrant shows any remorse during the hearing, it may factor in his favor, while any attempt he makes to promote his racist agenda will likely count against him.

Tarrant moved to New Zealand in 2017 and kept a low profile in the university city of Dunedin. He frequented a gym, practiced shooting at a rifle club range and built up an arsenal of weapons. He didn’t appear to be employed, and said in some online posts that he’d inherited a significant amount of money when his father died.

Tarrant appeared to have a fascination with religious conflicts in Europe and the Balkans, and visited a number of sites in Eastern Europe in the years before he committed the massacre. After his attack at the second mosque, Tarrant was driving, possibly to carry out a shooting at a third mosque, when two police officers rammed his car off the road, dragged him out and arrested him.

Al-Umari's 35-year-old brother Hussein was among those killed at the Al Noor mosque. In her victim impact statement, which she shared with The Associated Press ahead of the sentencing, she says that she mourns not only the loss of her brother, but also the loss of his hopes and goals, and that she will never have any nieces or nephews.

“There are no words that do justice to explain what it is like to go from having lunch with your brother on one day to burying him on another,” she writes.