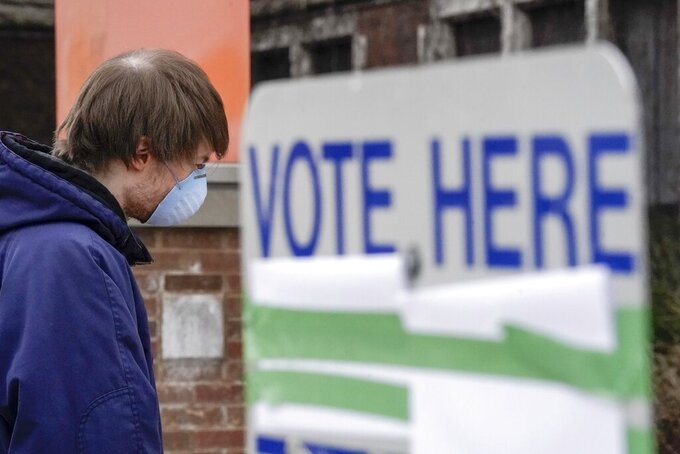 FILE - In this April 7, 2020, file photo voters line up at Riverside High School for Wisconsin's primary election in Milwaukee. Advocates for the disabled and minority voters in Wisconsin filed a sweeping federal lawsuit Monday, May 18, 2020, asking a judge to order that more poll workers be hired, every voter in the state receive an absentee ballot and a host of other changes be made to ensure the August primary and November presidential elections can be held safely amid the coronavirus pandemic.(AP Photo/Morry Gash, File)

MADISON, Wis. (AP) — Advocates for people with disabilities and minority voters in Wisconsin filed a sweeping federal lawsuit Monday asking a judge to order that more poll workers be hired, every voter in the state receive an absentee ballot application and a host of other changes be made to ensure the August primary and November presidential election can be held safely amid the coronavirus pandemic.

Wisconsin has been at the center of the fight, both in court and out, over elections during the pandemic after it proceeded with its April 7 presidential primary even as other states delayed voting. The election drew widespread criticism as voters faced long lines in Green Bay and Milwaukee, where just five of 180 polling sites were open.

The lawsuit argues that not enough has been done since then to ensure that the upcoming elections can be conducted safely and fairly. Proceeding without the changes sought would violate the U.S. Constitution, the Voting Rights Act and the Americans with Disabilities Act, the lawsuit alleges.

It was filed against the Wisconsin Elections Commission by Disability Rights Wisconsin, a Milwaukee-based advocacy group Black Leaders Organizing for Communities and three voters who said they were prevented from voting, or faced obstacles to casting ballots, in the April 7 presidential primary and spring election. Protect Democracy, a Washington, D.C.-based group formed by former aides to President Barack Obama, is assisting with the lawsuit.

“Wisconsin’s April 7 election was a disaster for the voters of the state and for our democracy,” said Rachel Goodman, an attorney for Protect Democracy. “Tens of thousands of voters were disenfranchised, and tens of thousands more were forced to risk their health in order to vote. We owe it to all Wisconsin voters to make sure the system doesn’t fail them again.”

The plaintiffs argue that the pandemic will still be ongoing, with no vaccine available, during the upcoming August statewide primary and November presidential elections. Voters will, understandably, fear for their safety if voting in person, the lawsuit alleges.

One of the voters who brought the lawsuit, Maria Nelson, is the wife of Democratic Outagamie County Executive Tom Nelson. Maria Nelson was diagnosed with breast cancer in February 2019 and did not feel safe voting in person in the April election. She requested an absentee ballot on March 31, but it did not arrive until the day after the election, disenfranchising her, the lawsuit said.

The lawsuit seeks multiple changes ahead of the elections, including sending absentee ballot request forms to all voters; hiring additional staff to count those ballots as they're returned; requiring that voting machines accessible to people with disabilities be available at all in-person absentee voting locations; hiring more poll workers; and upgrading voter registration systems to handle the anticipated increased volume of online voter registration and absentee ballot requests.

The lawsuit also asks that any voter whose immune system is compromised, who is therefore a higher COVID-19 risk, be able to cast absentee ballots without having to provide a copy of a photo ID or get a witness. And the lawsuit asks for suspension of a state law requiring that poll workers come from the county where they work, making it easier to deal with vacancies.

Three previous federal lawsuits related to how Wisconsin runs elections have already been consolidated into one. There are also two election-related lawsuits in state court.

This story has been corrected to show that the lawsuit asks that absentee ballot applications, not the ballots themselves, be sent to all voters.