Swiss to shut restaurants, other sites as virus cases climb 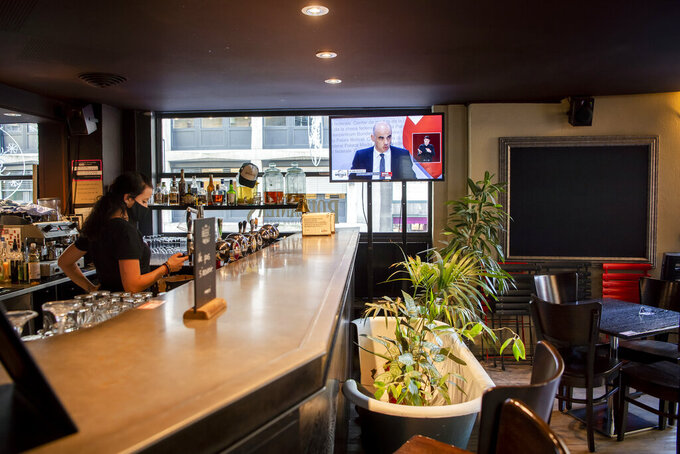 A waitress wearing a protective mask watches a TV showing Swiss Interior and Health Minister Alain Berset at a press conference in Bern announcing new measures against the Coronavirus (COVID-19), inside of the "Les Boucaniers" in Lausanne, Switzerland, Friday, Dec. 18, 2020. The Swiss government said Friday it is ordering the closure of restaurants, bars, cultural venues and sports facilities next week in a renewed bid to stem a continuing rise in coronavirus cases. (KEYSTONE/Jean-Christophe Bott)

GENEVA (AP) — The Swiss government said Friday it is ordering the closure of restaurants, bars, cultural venues and sports facilities next week in a renewed bid to stem a continuing rise in coronavirus cases.

The measure comes barely a week after authorities reopened eateries and watering holes in a wide swath of western Switzerland.

The closures, which take effect on Tuesday and will last through Jan. 22, are necessary because “hospitals and healthcare workers have been under extreme pressure for weeks and the festive period increases the risk of an even more rapid rise in cases,” the government said in a statement.

“The coronavirus is not letting us go during these holidays. The situation remains critical. That's why stricter measures have been decided,” said Swiss President Simonetta Sommaruga at a news conference.

“We now need all of Switzerland," Sommaruga said after acknowledging that some regions hesitated more than others about the new restrictions.

The government said that it's looking at new aid for affected businesses and would compensate “cultural actors” for financial losses while expanding eligibility for those in need of urgent aid.

The nationwide measures come amid varying rates of infection in the country that have underscored the complexities besetting policymakers trying to balance public health and economic interests.

Only a week earlier, restaurants in French-speaking parts of western Switzerland began reopening after a six-week closure order as case counts and deaths spiked in late October and early November. Since then, northern areas near Germany have been hard hit, prompting calls for new nationwide measures.

“The situation and evolution of the pandemic is not meeting our objectives," said Health Minister Alain Berset.

The government is also restricting further the number of people who can be in stores, which must close after 7 p.m. and on Sundays and public holidays.

The federal government left it to Switzerland’s 26 cantons, or regions, to decide whether to close skiing facilities. Their continued operation has raised concerns in several of Switzerland’s neighboring countries, where ski stations have been shut to help prevent the spread of the pandemic.

The new restrictions add to a wealth of measures already in place including limits to the size of both public and private gatherings, broader mask-wearing requirements, a ban on choral singing except at home or school and a call to work from home where possible.

Frank Jordans in Berlin contributed to this report.