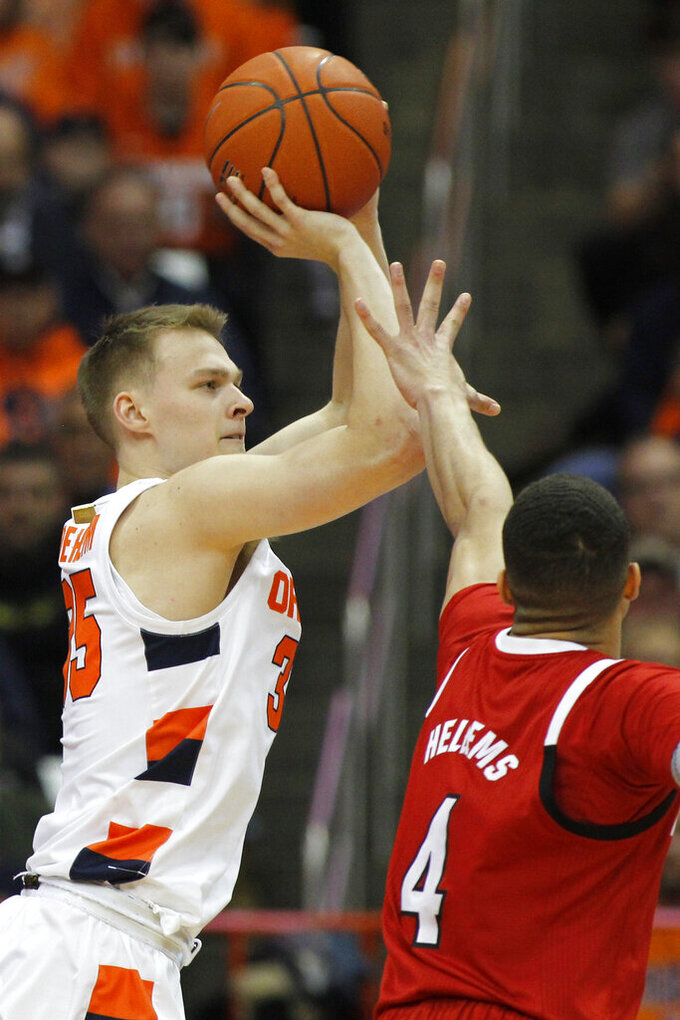 Syracuse basketball coach Jim Boeheim was totally at ease during his first-ever virtual media day with reporters last week, confident that all the coronavirus precautions implemented by the team would allow the Orange to start the season as planned.

No team meetings, no meetings between coaches, no film sessions, coaches wearing masks all the time, electronic gadgets to monitor social distancing, and more.

“They’re just trying to stay as much in a bubble as much as we can so that we can play. Hopefully, that’s what will happen," Boeheim said Thursday.

Now Boeheim is in isolation and program activities have been paused. He announced Sunday evening that he had tested positive for the virus but was “not experiencing any symptoms.”

Which means the oldest coach in the history of Division I men’s basketball will celebrate his 76th birthday on Tuesday away from the team and wondering about the opener of his 45th season at the helm of his alma mater.

Syracuse athletic director John Wildhack said after Boeheim tested positive all members of the men’s program were tested. Program activities were stopped when another positive was recorded.

The university already has shut down all in-person classes and the effects of Halloween are now being felt. Onondaga County, where the university sits, has recorded more than 1,400 cases since Nov. 6.

Football coach Dino Babers said Monday that his program had no cases after the latest round of testing as it prepares for a road game against Louisville on Saturday following a bye week.

While all that was swirling around, Boeheim was conducting practices in as normal a fashion as possible.

“He hasn’t taken one moment to be negative," said Boeheim's youngest son, Buddy, a junior guard. "He’s really helped us, just being thankful ... for being able to do this. He always tells us, ’Hey, you’re getting better. If we even have a full season or not, you got a lot better.' We’re getting better as a team. That’s all you can really ask for.”

In his Hall of Fame career, Boeheim has missed only 12 games — three while recovering from surgery for prostate cancer nearly two decades ago and nine games five years ago as punishment for NCAA violations. Atlantic Coast Conference protocols call for 10 days of isolation plus a 24-hour period without symptoms.

The season opener against Bryant in the Carrier Dome is scheduled for Nov. 27.

“The one thing I’ve learned in my life is you don’t sit still and you don’t give up and you don’t quit," Boeheim said. "I’m against that 100%, and I see that out there today. I don’t think you give up. I think you try to work through it. You establish protocols, try to keep yourself, your players healthy. I think we have to find a way to work through this taking all the precautions we can ... but we can’t give up.”

Babers said he expects Boeheim to be back as soon as he gets the OK and that's probably about right. At the end of his nine-game suspension, Boeheim was watching the clock waiting for the exact minute the forced hiatus ended so that he could walk in and address the team.

“I’ll you what, that guy is in better shape than a lot of people have any clue," Babers said. “When he says that he’s at home resting and he’s going to whoop tail and be back here in a little bit, there’s no doubt in my mind that’s exactly what’s going to happen.”