Syracuse loss to No. 16 Virginia hurts cause for NCAA field 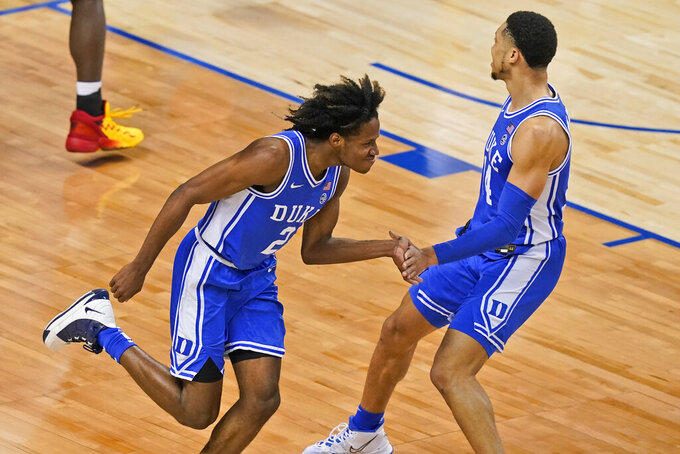 Jim Boeheim figured his Syracuse team has done enough to earn a bid to the NCAA Tournament.

The Orange beat North Carolina State on Wednesday in the Atlantic Coast Conference Tournament, a matchup of the league’s two teams facing bubble uncertainty. That certainly helped Syracuse as it hovers around the cut line in many bracket projections.

“I think when you look at the profile overall, I think we’ve got a lot of good wins against good teams,” Boeheim said, adding: “I think we did what we needed to do this year, but we’ll see what happens.”

Syracuse (16-9) jumped 10 spots to No. 39 in NET on Thursday before its loss to No. 16 Virginia in the ACC quarterfinals. And the Orange went from being just outside the 68-team field to a No. 12 seed in BracketMatrix's average of tournament projections, with the Orange appearing on 74 of 117 mock brackets as of midday Thursday.

Syracuse lacks a headline win on a resume that includes a 1-7 record in Quadrant 1 games — the top category based on an opponent’s NET ranking — though Boeheim noted seven of the eight games were played on the road.

He also pointed to the team’s 5-1 record against Quadrant 2 teams, with the win against the Wolfpack — coming off five straight wins — joining that category.

Beating Virginia on Thursday likely would have eliminated all doubt on Syracuse's tournament chances.

Colgate: The Raiders (13-1) cracked the 100-point mark in beating Bucknell in the Patriot League Tournament, which they likely must win to earn the bid. Colgate has a curiously high NET of No. 8 (sandwiched between sixth-ranked Alabama and ninth-ranked Ohio State) despite not playing a Quadrant 1 game.

Marshall: The Thundering Herd (15-7) had won six of seven but likely saw their chances evaporate with Wednesday’s loss to Rice in the Conference USA Tournament.

N.C. State: The Syracuse loss essentially eliminated the Wolfpack (13-10), with coach Kevin Keatts being asked whether his team would accept a bid to a downsized 16-team NIT. “I hate to think about that,” he said, “but certainly that’s a good question to ask.”

Xavier: The Musketeers (13-8) blew a 19-point lead in Wednesday’s overtime loss to Butler in the first round of the Big East Tournament. Xavier has to hope wins against No. 17 Creighton and No. 25 Oklahoma are enough.

Duke: The Blue Devils (13-11) originally were rising after keeping slim chances alive with Wednesday’s second-round win against Louisville in the ACC Tournament. They were set to face No. 15 Florida State on Thursday but withdrew from the tournament and ended the season after a positive COVID-19 test within the program led to quarantines and contact tracing.

Michigan State and Maryland met in Thursday's second round of the Big Ten Tournament, matching teams that appear to be on the right side of the bubble.

The Spartans (15-12) had lost at Maryland by 18 on Feb. 28 but likely locked up a bid with last weekend's upset of fourth-ranked Michigan. The Terrapins won five straight in February to improve their chances, but closed with losses to Northwestern and Penn State before regrouping with Thursday's win.

Both Maryland and Michigan State were listed as No. 11 seeds based on BracketMatrix's projections Thursday.