Syria says Assad, his wife have recovered from coronavirus 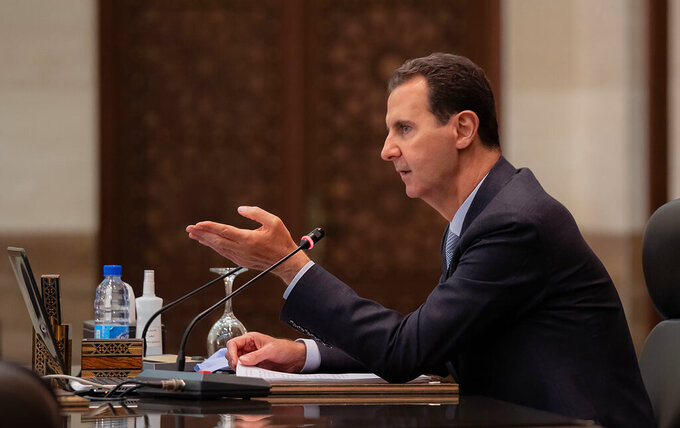 In this photo released on the official Facebook page of the Syrian Presidency, Syrian President Bashar Assad heads a cabinet meeting, in Damascus, Syria, Tuesday, March 30, 2021. Assad and his wife have recovered from COVID-19 and returned to their regular duties on Tuesday, three weeks after they had tested positive for the coronavirus, the president's office said. (Syrian Presidency Facebook page via AP)

BEIRUT (AP) — Syrian President Bashar Assad and his wife have recovered from COVID-19 and returned to their regular duties on Tuesday, three weeks after they had tested positive for the coronavirus, the president's office said.

According to the statement, Syria's first couple had their PCR tests and the results were negative, and the mild symptoms of the virus that they had experienced before were now gone.

Assad, 55, and his wife, Asma, who is 10 years younger and had announced her recovery from breast cancer in 2019, had isolated themselves since testing positive on March 8.

Syria is witnessing a sharp increase in cases. Earlier this month, state media has reported that intensive care units in state hospitals in the capital of Damascus were full and that medical staff have been called to stay on alert to deal with coronavirus patients.

Syrian authorities have so far registered more than 18,000 cases of the coronavirus and 1,247 deaths in government-held parts of the country, where the first case was reported in March last year.

According to the World Health Organization, there are nearly 21,000 cases in the last rebel stronghold in Syria’s northwest along the border with Turkey, as well as some 9,000 cases in areas controlled by U.S.-backed Kurdish-led fighters in the northeast.

The real numbers are believed to be much higher, as testing is limited. Many Syrians cannot afford PCR tests amid the country’s severe economic crisis.

The pandemic, which has severely tested even developed countries, has been a major challenge for Syria’s health care sector, already depleted by 10 years of conflict. The conflict has killed more than half a million people and displaced half of Syria's pre-war population of 23 million.

WHO said last week it will oversee a coronavirus vaccination campaign in Syria that is expected to start in April, with the aim of inoculating 20% of the population by the end of 2021.