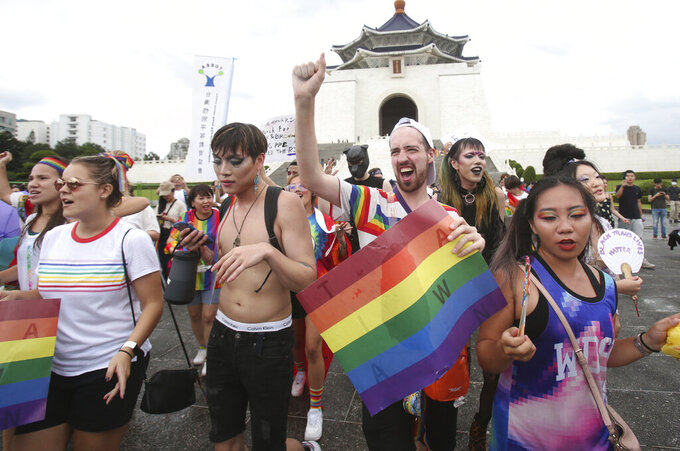 Participants march during the "Taiwan Pride March for the World!" at Liberty Square at the CKS Memorial Hall in Taipei, Taiwan, Sunday, June 28, 2020. This year marks the first Gay Pride march in Chicago 1970, and due to the COVID-19 lockdown, Taiwan is one of the very few countries to host the world's only physical Gay Pride. (AP Photo/Chiang Ying-ying)

TAIPEI, Taiwan (AP) — The Taiwanese capital held its annual LGBT Pride parade on Sunday, making it one of the few places in the world to proceed with such an event in the face of the coronavirus pandemic.

The parade in Taipei has drawn tens of thousands of people in the past, but participant numbers Sunday were reduced by both virus concerns and heavy rain. Taiwan's Central News Agency said that over 1,000 attended.

Those who did take part said it was a testament both to Taiwan’s ability to contain the pandemic and its commitment to rights for people of all sexual orientations.

Taiwan is the only place in Asia where same-sex marriage is legal, and its liberal political system has long promoted human rights, free speech and freedom of assembly.

“I think Taiwan has done a really good job so far, and I am really proud of living here, not only because it’s so open to people like myself, the gay community, but also because I think it’s such an example for the world and how to handle the pandemic so far," Couse said.

New York was among the cities compelled to cancel its gay Pride parade this year to comply with social distancing measures.

Taiwan has largely dropped such restrictions after quarantines and case tracing helped bring the coronavirus infection rate down radically. In all, the island of 23.7 million people has confirmed 447 cases, including seven deaths.