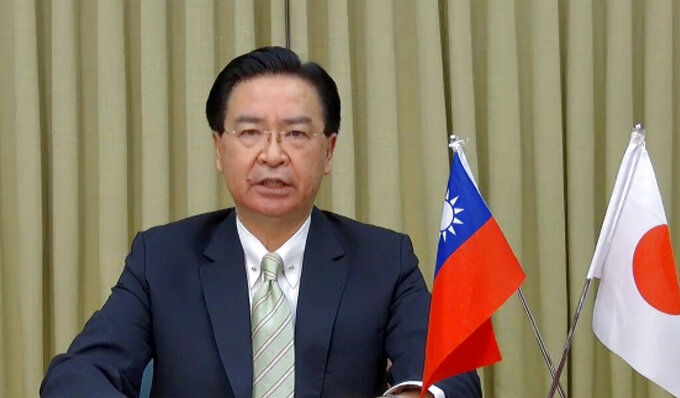 In this image from video released by Foreign Correspondents' Club of Japan, Taiwan Foreign Minister Joseph Wu attends a remote press conference with Foreign Correspondents Club of Japan in Tokyo, Thursday, June 3, 2021. Wu on Thursday said China is seeking political gains abroad in return for providing vaccines and other pandemic assistance, partly to increase pressure on Taiwan, which it claims as its own territory. (FCCJ via AP)

TAIPEI, Taiwan (AP) — Taiwan’s foreign minister on Thursday said China is seeking political gains abroad in return for providing vaccines and other pandemic assistance, partly to increase pressure on Taiwan, which it claims as its own territory.

Beijing’s Communist Party leaders “further exploited the pandemic to impose their political agenda on many others," Joseph Wu said in a video conference with the Foreign Correspondents’ Club of Japan.

In particular, China’s “vaccine diplomacy” is creating divisions among countries in Central and South America, giving Beijing an opportunity to exert its influence in the Western Hemisphere, Wu said.

Beijing is providing access to its domestically produced vaccines, other anti-coronavirus resources and development funding to “those who are willing to accept political partnership with Beijing,” he said.

China says its overseas assistance comes without political conditions, but has aggressively used its economic might in recent years to poach Taiwan's few remaining allies and erode the influence of the U.S. and other democracies.

Wu said China has already left a “trail of debt, corruption and an erosion of democratic governance” in some countries in Asia, Africa and Europe that agreed to Chinese financing for ports, railways and other infrastructure projects under leader Xi Jinping’s signature Belt and Road Initiative that has boosted China’s influence abroad.

China has sold hundreds of millions of coronavirus vaccine doses abroad and donated millions more, mainly to developing nations in Africa. The World Health Organization has given emergency authorization for two Chinese-developed vaccines, but the companies, particularly Sinopharm, have faced criticism over a lack of transparency in sharing data.

China has shut Taiwan out of an increasing number of international organizations, including the WHO, and has blocked Taiwan’s cooperation with the U.N. organization's anti-pandemic efforts, including the COVAX initiative that distributes vaccines to middle- and low-income countries, Wu said.

However, he said Taiwan is gaining greater international political support to be included in the WHO as either a member or observer.

“That is helping the Taiwanese people and we really appreciate it," Wu said.

There was no immediate response from China to Wu’s comments, but on Wednesday a spokesperson for the government’s Taiwan Affairs Office denounced reports that China was intervening to block the delivery of vaccines to Taiwan as an attempt by the island’s government to shift responsibility for a recent surge in local cases.

Ma Xiaoguang said China had “repeatedly expressed willingness to try its best to help Taiwan compatriots fight the virus, and help them use the WHO-endorsed mainland vaccines as soon as possible."

Taiwan bans the importation of pharmaceutical products from China, and Wu said the island would soon roll out its own domestically produced vaccine.

Along with the diplomatic pressure, China has been upping its threat to use military force to bring Taiwan under its control by holding military exercises and sending military aircraft near the island. Wu said Taiwan's government and citizenry are “absolutely committed to self defense" and the administration is working to boost its military capabilities, including through the purchase of weapons from the United States.

Taiwan split from mainland China during a civil war in 1949 and has never been governed by China's ruling Communists.

China is employing “all means possible to induce a crisis just below the threshold of a major war," Wu said.

He emphasized the closeness of ties between Japan and Taiwan, a former Japanese colony, despite their lack of formal diplomatic relations.

“Taiwan and Japan share the values of freedom, democracy, human rights protection and the rule of law," Wu said.