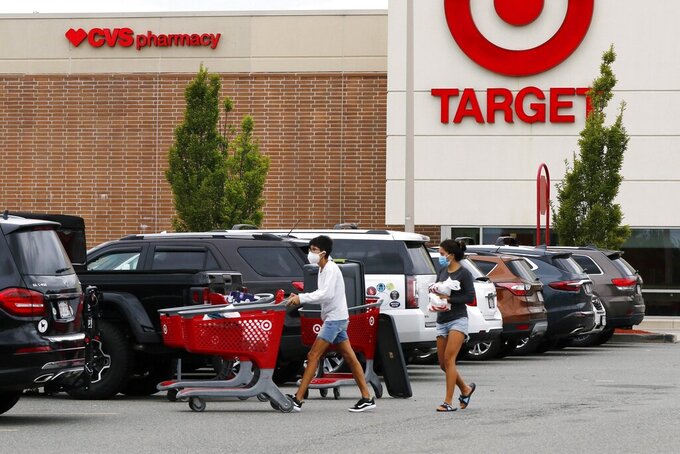 FILE - In this Aug. 4, 2020 file photo, shoppers take purchases to their vehicle in the parking lot of a Target store in Marlborough, Mass. Target’s strong sales streak extended through the holiday season, as shoppers snapped up everything from clothing to home goods during the pandemic. The Minneapolis company reported Wednesday, Jan. 13, 2021, that its online sales surged 102% for the November and December period. (AP Photo/Bill Sikes)

NEW YORK (AP) — Target's strong sales streak extended through a pandemic-shrouded holiday season after a hard push online and an increased effort to provide alternatives to customers who are trying to minimize risk.

The retailer reported Wednesday that online sales surged 102% between November and December. Sales at its stores opened for a least a year rose 4.2%. Customer traffic rose 4.3%, and the average amount of sales per customer rose 12.3% as they consolidated trips to different stores during the pandemic.

And changes made during the pandemic once unthinkable have worked so well that they may become the new norm.

For example, Target closed all of its stores on Thanksgiving, traditionally the starting gun for the holiday season, rolling out discounts and specials early and over a broader period to control traffic in stores.

It said Wednesday that it will close its stores again on Thanksgiving this year, and some industry watchers believe Target may not be alone.

“Despite disruptions to the traditional pattern of holiday trade, retailers were able to thrive if they put their best foot forward and stimulated consumers to buy across the whole season,” said Neil Saunders, managing director of GlobalData Retail. “In our view, this means that it is even less likely retailers will return to the big sales bonanza of Thanksgiving and Black Friday even when the pandemic is over. Target’s decision not to open on Thanksgiving of 2021 underlines this point.”

Target gained market share in all five its core merchandise areas. Sales were strongest in its home and furniture departments, even as it was forced to devise new strategies during a period when store aisles are typically teaming with customers.

It aggressively discounted prices starting in early in October to get an early start on an unprecedented shopping season, offsetting the Thanksgiving closure of stores. Black Friday doorbuster deals went online as retailers tried to keep customers engaged while mobility was restricted by the pandemic.

Customers have responded in force to efforts by Target to help them reduce exposure to the virus through same-day store pick up for orders, and also delivery. Same-day services increased 193% during the November and December period, the company said.

Even with the push online, Target's 1,900 locations have become an even greater strength as infections surged and people tried to stay home. Drive-up service for shoppers grew the fastest during the holiday season, the company said, and about 95% all sales were fulfilled by Target stores during the two-month period.

A fuller view of the holiday season's sales will come on Friday when the U.S. government releases its December retail sales figure.

The picture has been mixed so far. Seattle-based Nordstrom Inc. reported late Wednesday that its net sales dropped 22% in the nine-week holiday period ended Jan. 2, compared with the nine weeks ended Jan. 4, 2020. Online sales increased 23% during the holidays and represented 54% of total sales.

Lululemon Athletica Inc., benefiting from an increased appetite for active wear during the pandemic, raised its profit and revenue outlook for the fiscal fourth quarter on Monday after a strong holiday season. Tiffany & Co. last week reported a 2% gain in preliminary holiday sales, helped by strong sales in China and online. But business fell in the Americas.