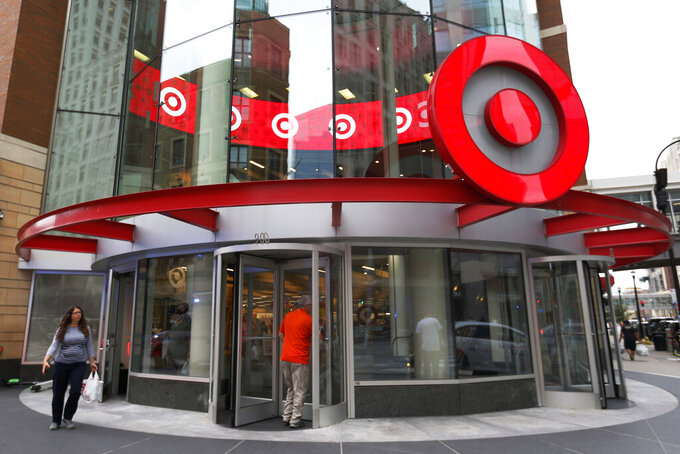 FILE - In this July 10, 2019, file photo shoppers visit the downtown Target store in Minneapolis. Target has reported surging sales and profits for its fiscal first quarter thanks to shoppers who bought more apparel as they emerge from the pandemic. (AP Photo/Jim Mone, File)

NEW YORK (AP) — Target's sales and profits surged in the first quarter as its customers, emerging from the pandemic, returned in big numbers to its stores for dresses, cosmetics and luggage.

Sales at stores opened at least a year jumped 18% in the three-month period that ended May 1. That follows a 6.9% increase in the previous quarter. Online sales soared 50% after rocketing 118% higher in the final quarter of 2020.

“With vaccinations rolling out across the country and consumers increasingly comfortable venturing out, we’ve seen an enthusiastic return to in-store shopping," CEO Brian Cornell told industry analysts Wednesday. That's a big contrast to a year ago when shut-in shoppers relied heavily on delivery, he said.

Almost all retailers reporting quarterly earns this week have put up enormous sales figures, evidence of a migration from time spent shuttered indoors to something closer normalcy.

Walmart, the nation’s largest retailer, boosted its profit expectations for the year Tuesday, while Macy’s surprised almost everyone by swinging back into the profit column. It also boosted its 2021 guidance. TJX on Wednesday said that it had reversed losses from last year and sales are booming.

Home Depot and Lowe's, which have not suffered like department stores during the pandemic thanks to a booming housing market, topped projections from Wall Street analysts who had already been lifting their sales and profit expectations.

Clothing was the star performer at Target during the quarter. Clothing sales spiked more than 60%.

However, sales of home goods rose in the mid-30% range and there is continued strength in sales of health products as well with some habits built during the pandemic taking hold for the longer term, said Target's Chief Growth Officer Christina Hennington.

Target said in March that it will plow $4 billion into its business annually for the next several years to redo its stores, add new ones and speed up delivery. Capital investment is up 50% from the previous year.

Target has expanded online delivery and made it easier for customers to get what they want during the pandemic. Items picked up at the store after being purchased online and Shipt, a member-based shipping program, increased by more than 90%, according to the company. Store locations remain central to company operations however, with more than 95% of overall sales being fulfilled there whether the purchase was made online or at Target registers.

First-quarter net income increased more than sixfold to $2.1 billion, or $4.17 per share. Removing one-time costs and benefits, per share earnings were $3.69, easily surpassing Wall Street expectations of $2.21, according to FactSet.

The company last year during the same period earned $284 million, or 56 cents per share, when shoppers were buying more low-margin goods like groceries and fewer goods that are more profitable for Target, such as clothing.

Target has been able to manage inflationary pressures, Cornell told reporters during a media call Tuesday. Target, which has been investing heavily in its workers, has not faced the same labor shortages being reported widely by many service sector companies, he noted.

Target expects comparable sales growth to be up in the mid to high single digits in the current quarter compared with last year. It also expects its second-quarter operating profit margin rate will be well above the second quarter 2019 rate of 7.2%, but likely not as high as last year’s unprecedented 10.0%.

This story has been corrected to show that the media call was Wednesday, not Tuesday.