Taurasi feeling fine at Olympics after first game in 3 weeks 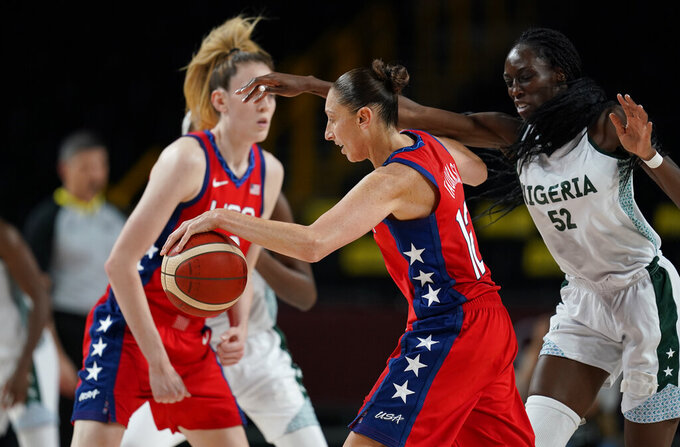 SAITAMA, Japan (AP) — Diana Taurasi had a big smile on her face when she stepped on the court against Nigeria for her record 33rd Olympic game Tuesday.

The five-time Olympian was playing in her first contest since injuring her hip three weeks ago while practicing with the Phoenix Mercury. She had said during the Americans training camp in Las Vegas that she'd be “fine and ready to go for the Tokyo Games.”

She was a woman of her word on Tuesday.

“It was a nice to get out there and compete a little bit with the group," said Taurasi, who had 10 points in the 81-72 win over Nigeria. “Yeah, I felt pretty good. Hopefully it keeps getting better day by day.”

Having Taurasi back certainly provided comfort for the Americans, who have now won 50 consecutive games in the Olympics.

“You need players like that,” said Sue Bird of her longtime Olympic teammate. “She can set the tone in that way for us being a calming presence.”

She provided just that. With the Americans trailing 8-1 the 39-year-old Taurasi hit the team's first basket — a 3-pointer. She had 10 points — all in the first half — as the U.S. used a 23-0 run in the second quarter to take control of the game.

“She's still on her own little journey getting back to 100%,” said Bird. “You could see there were moments where things were chaotic and frantic and she just has a nice calm demeanor. She gets the ball, comes off a pick and roll and hits the 3-pointer."

Having not been able to practice for much of the Las Vegas training camp, Taurasi is still getting accustomed to this team that has six Olympic newcomers on it.

One play in the second half against Nigeria illustrated how it's still a work in progress.

Taurasi caught the ball on the wing and passed it to the corner assuming a teammate would be there, but that player had already run to the other side of the court. So the ball just sailed out of bounds — one of 25 turnovers the U.S. committed. Taurasi just threw her hands up and smirked.

Nigeria made a late run to get within eight before losing by nine — the closest any team has come to the U.S. since the semifinals of the 2004 Athens Games.

“I think a lot of the youngsters are finding out it’s not as easy as it seems when you’re at home and you’re watching,” Taurasi said. “You just think, ’Oh you go out and play.' There’s a lot to go with it and it’s years of work to get here.

“I think that’s the one thing that’s the most satisfying. You don’t just show up on this team and you get to play," Taurasi said. “You kind of have to earn your stripes and it means a lot to be here.”