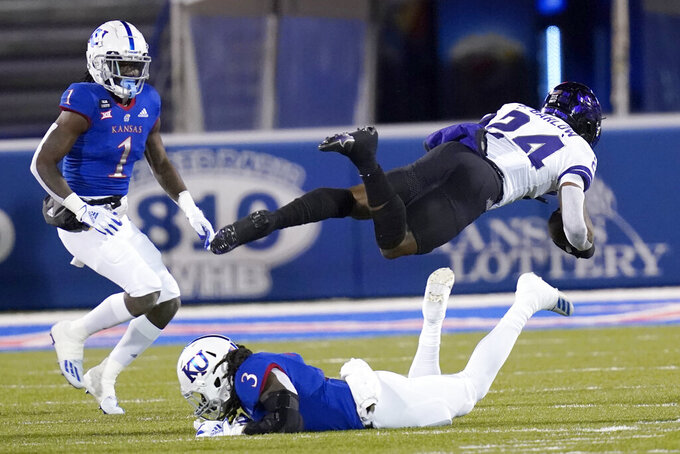 Four hours later, the Horned Frogs kept running the ball just to run out the clock.

Max Duggan threw for touchdowns on his only three completions while running 58 yards for another score, TCU ran for 337 yards in all, and the Horned Frogs bludgeoned their way to a 59-23 victory despite coach Gary Patterson estimating his team was “missing close to 40 guys” due to COVID-19 tests, contact tracing and run-of-the-mill injuries.

“Our whole thing is run the football if that's what they're going to allow us to do,” Patterson said. “Then the whole thing was, you get ahead, how do you get the game over with as quick as you can? We're going to get home late tonight and we are going to have a game next week. The faster you can get off the field, less chance of getting hurt.”

Zach Evans ran for 100 yards on 12 carries, and Darwin Barlow added 83 yards rushing and a score, as the Horned Frogs (4-4, 4-4 Big 12) easily bounced back from a lopsided loss to West Virginia in which they failed to reach the end zone.

TCU had no such trouble in this one.

Duggan threw two TD passes to Pro Wells and another to Carter Ware, and Derius Davis returned a punt for a score, as Patterson's crew romped to a 38-12 halftime lead. They settled into a ground-and-pound approach from there, and a pick-six from C.J. Caesar II and fumble recovery for a score by Dee Winters put an exclamation mark on the win.

The Jayhawks (0-8, 0-7) tried errant and unsuccessful Jalon Daniels and Thomas MacVittie before giving Miles Kendrick a shot at quarterback. The third-stringer provided a spark, completing 11 of 18 passes for 166 yards with two TD passes to freshman Luke Grimm, who'd had just nine catches without a score all season.

Still, he hardly could overcome a defense that allowed at least 52 points for the fourth straight game.

TCU plowed down field for an opening field goal, then it forced Kansas into three straight three-and-outs that the Horned Frogs answered with three consecutive touchdowns — and they were off and running. Literally.

On the first TD, Duggan dropped back on third-and-11 and hoisted a 46-yard pass to the 6-foot-4, 250-pound Wells, who walked backward into the end zone without a Jayhawk defender within 20 yards. On the second, Duggan tossed a 26-yard TD pass to the 6-4, 249-pound Ware, who didn't have a defender within 30 yards of him.

Yes, the Jayhawks managed to lose a quarter-ton of tight ends on consecutive series.

“Whatever way we score,” Duggan said, “I'm going to be very happy.”

Their problems boiled over when a snap over Daniels' head resulted in fourth-and-33 at their own 3-yard line. Kansas punter Reis Vernon, who had already shanked one kick, drilled a liner at Davis, who deftly weaved his way through the coverage for a 37-yard return that made it 24-0.

At that point, the Horned Frogs had 187 yards total offense. Kansas had minus-20.

The Jayhawks even had things go against them when they scored. Daniels threw a 48-yard touchdown pass to Kwame Lassiter II and they successfully kicked the extra point, but coach Les Miles took the point off the board and accepted an offsides penalty instead. Kansas proceeded to try the 2-point conversion and was stuffed.

"I was absolutely certain we were going to see mistakes at some point," Miles said. “The inability to play a game free of issues and mistakes, that's something a good football team can get accomplished, and we're heading in that direction.”

The game was designated senior day for Kansas, but it carried a big asterisk. Seniors are eligible to return for another season because of the pandemic, and the Jayhawks still have a makeup game against Texas on Dec. 12 at Memorial Stadium. But with many family members — pretty much the only folks allowed in the stands because of the recent spike in cases — having already made travel plans, Kansas decided to go forward with its senior send-off.

TCU controlled the line of scrimmage, particularly on offense, where its entire corps of running backs were usually several yards downfield before meeting a defender. The Horned Frogs averaged 8.2 yards on 41 carries.

Kansas had not played since Nov. 7 due to byes and COVID-19 procedures, so the Jayhawks should have been prepared. But they were dominated at the line of scrimmage, dropped a handful of passes and blew countless defensive assignments.