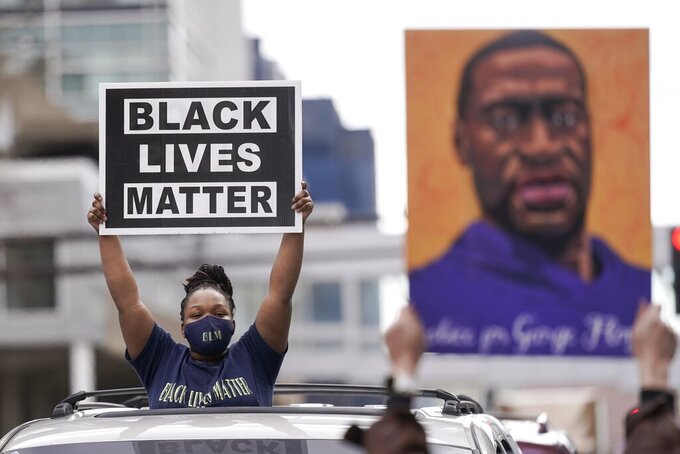 People hold signs, including one with an image of George Floyd, outside the courthouse in Minneapolis on Tuesday, April 20, 2021, after the guilty verdicts were announced in the murder trial of former Minneapolis police Officer Derek Chauvin in the death of Floyd. (AP Photo/Morry Gash)

BILOXI, Miss. (AP) — On Wednesday afternoon, the head coach of the boys’ basketball team at Pascagoula High School gathered with his players in their locker room.

Because of a schedule change, they weren’t practicing that day. Instead, they were talking. The topic was the three guilty verdicts handed down against the former Minneapolis police officer who killed George Floyd.

The players, the vast majority of whom are Black, and their coach, Lorenzo Wright, who is also Black, had already discussed Floyd’s death under the knee of Derek Chauvin when it happened last May.

“I felt like it was a conversation that needed to be had,” Wright said. “It was out front, visible for you to see. And clearly the kids had saw it already. So instead of just kind of pushing it underneath the rug or ignoring it, I just decided to address it head-on.”

And he planned to do the same following the news Tuesday afternoon that Chauvin had been found guilty on three counts, including second-degree unintentional murder, in Floyd’s death.

During a school year unlike any other, many Coast teachers, coaches and the teenagers they educate have grappled with issues like systemic racism and police brutality. For some teachers, creating space for young people to discuss those issues feels essential. And for students, the classroom can be a place to learn from each other and find common ground.

Byron Swetman, the senior class president at St. Martin High School in Jackson County, said he had been grateful for a required government class this year that “really sparked the conversation about racism and police brutality.”

“There were some disagreements in terms of how to find a solution, but there really was common agreement that there was an underlying problem,” he said.

‘IT TAKES A VILLAGE’

As a Black man coaching mostly Black teens, Wright said he had to talk with his players about how to conduct themselves around police as part of his larger work of helping “kids, especially young men, transition into being adults.”

But other teachers and teens interviewed expressed some wariness about discussing topics like racism and police brutality, which are both structural and intensely personal, as part of classroom activities.

Shari Irvin, an 18-year-old senior at Gulfport High School, said that while she had discussed Floyd’s death, racism in policing, and police brutality with close friends, it had not come up with a teacher or as part of a class activity.

“It’s a very sensitive topic, and I feel like if a teacher says anything wrong, if a student said anything wrong, I don’t think I would be able to handle that,” she said.

Two Coast school districts contacted for this story declined to allow teachers to talk with the Sun Herald about how they addressed Floyd’s death and the Chauvin verdict in their classrooms, though the teachers were open to being interviewed. A teacher in a third district agreed to an interview and then changed his mind, fearing potential consequences.

Dr. Jo Hawkins-Jones, an assistant teaching professor at the University of Southern Mississippi, said that conversations about topics like race can be sensitive. In particular, white teachers with mostly Black students may feel uncomfortable talking about race in their classrooms. And for everyone, a misstep on a delicate topic can have big consequences, so teachers may feel like they are “walking on egg shells.”

“The only way we can get past racism in education or address these issues with race and class in society is by having those conversations,” she continued. “But they’re hard conversations, and people steer away from them.”

CONVERSATIONS OUTSIDE THE CLASSROOM

On May 25, 2020, Coast students were out of school. The COVID-19 pandemic had closed school buildings in March and summer break had just started. At about 8 p.m. that evening, an employee at a Minneapolis convenience store called the police to say a man had used a counterfeit $20 bill.

The police who arrived handcuffed Floyd. Chauvin knelt on his neck for more than nine minutes. Floyd was pronounced dead at 9:25 p.m.

A 17-year-old named Darnella Frazier had filmed the scene. The video she posted on Facebook contradicted the initial police account of what had taken place.

Among the millions of people who saw it was Jae’Von Narcisse, now a 15-year-old sophomore at Moss Point High School.

“I’m thinking, how are police supposed to protect us, doing things like this?” he said.

Irvin saw the conversation about the video developing on Instagram. At first, she didn’t want to watch it.

Students talked about Floyd’s death with their close friends and shared thoughts on social media. Irvin said she had become more political and outspoken on social media, looking for posts about “real stuff going on in this world” instead of celebrities.

Somer Martin, also a senior at Gulfport High, found out about Floyd’s death because Irvin sent her the video.

“I feel like that could have been any one of my friends, my uncles, my brothers, my cousins,” she said.

Irvin wanted to go to one of the protests organized on the Coast, some of which were coordinated by teenagers, but her mother was worried about possible violence. She made a sign anyway, writing “TAKE YOUR FOOT OFF OUR NECKS” and “I CAN’T BREATHE” on a piece of cardboard. She used crayons to shade the cardboard with red, white and blue, symbolizing the lights on a police cruiser, and the colors of the American flag.

When students returned to school in August, virtually and in person, they carried with them what they had seen: Floyd’s death, protests everywhere, from rural towns to America’s biggest cities, and sharp debates on social media.

Siriss McLaurin, a senior at Gulfport High, recalled that many answers to the perennial back-to-school question of “What did you do this summer?” were longer than usual.

“A lot of the answers were (about) protesting and police brutality,” he said.

Gulfport High’s student body is about 50% Black, 42% white, 5% Hispanic and 1.5% Asian, according to data from the state Department of Education.

So it was not a surprise that sometimes conversations got heated, especially as the 2020 presidential election approached and the topic of race and policing never faded.

“The tension was kind of high between people,” McLaurin said. “So to put them in a building, and sometimes in the same classes, it definitely brought a lot of online energy in-person. It definitely fueled even more conversations.”

At St. Martin, students in Royce Harvey’s government class frequently brought up topics of race and policing for discussion, Swetman said. The students debated different solutions: Swetman, who comes from a law enforcement family, disagreed with some students who advocated abolishing the police, for example.

But across lines of race, geography and political persuasion, he said, students agreed Floyd’s death illustrated a larger problem.

“There’s no reason that this issue should be political,” he said. “There can be some partisanship in terms of finding a solution. I think that’s perfectly fine. But I think disregard, and lack of acknowledgment of these issues, there’s no excuse for it.”

Hawkins-Jones said that when educators want to start conversations about racism and policing in their classrooms, they should first take account of their own perspectives and biases.

In the classroom, teachers should present broad questions and topics to get students thinking and talking. They should not over generalize, and they shouldn’t make assumptions about students’ experiences.

Preexisting trust is also important, she said. Black and Hispanic students in particular may not want to share experiences of racism with a teacher with whom they don’t have a positive relationship.

Though it requires thoughtfulness and planning, talking about current events and social issues in the classroom is important, she said.

“These events, they play a part in our students’ attitudes, their motivations, their engagement,” she said. “It also helps you to build that civic responsibility in your students. If you’re in a history classroom, that’s what history is about: making a difference. You should be able to help people see how things have changed over the course of time, how they can be responsible and make a difference in the world to promote a greater change.”

At 3 p.m. Wednesday, a dozen of Wright’s players filed into the locker room. Eleven of the young men are Black and one is Hispanic. The coaches started by talking about their reactions to the verdict and then opened the floor to the players.

“A couple of them did express that they were pretty pleased with the verdict,” Wright said.

Players also brought up Ma’Khia Bryant, a 16-year-old Black girl shot and killed by a Columbus, Ohio, police officer on Tuesday afternoon, shortly before the verdict in Chauvin’s trial was announced.

“When is it going to stop?” Wright said his players wondered.

Wright looked at the clock. It was 3:40 p.m. already, and time to wrap up. It wasn’t long enough, the coach felt. The teens had more to say.