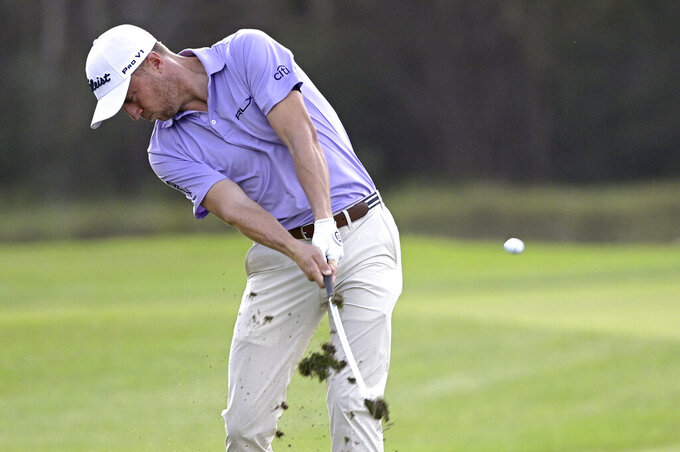 Justin Thomas hits from the 14th fairway during the first round of the PNC Championship golf tournament, Saturday, Dec. 19, 2020, in Orlando, Fla. (AP Photo/Phelan M. Ebenhack)

ORLANDO, Fla. (AP) — Justin Thomas and Tiger Woods traded text messages on the eve of the final round at the PNC Championship, their teams tied for the lead and in contention. Neither mentioned winning.

This was about Woods getting to play alongside 11-year-old son Charlie, watching him twirl the club after a good drive and yes, even deliver a fist pump in his red shirt on Sunday. For Thomas, it was about competing with his father Mike, a longtime club professional in Kentucky and the only coach he's ever had.

Team Thomas birdied the opening seven holes and the father delivered a 5-foot birdie putt on the 18th hole that gave them a 15-under 57 in the scramble format and a one-shot victory over Vijay Singh and son Qass.

They won the Willie Park Trophy. It only felt like the other 19 teams won a participation trophy.

“Memories we'll have for our entire lives,” Woods said after he and Charlie posted another 62 to finish seventh. “He's not going to appreciate this at 11 years old. I didn't when I was with my dad. As the years go by, you start appreciating it more.”

Woods and his son dressed in his traditional Sunday red with black trousers. Charlie's mother, Elin Nordegren, walked the final round at The Ritz-Carlton Club at Grande Lakes, her first time at a golf tournament since the 2009 Presidents Cup at Harding Park.

The Woodses played the final six holes in 6-under par, too late by then to do anything about Thomas and his father. Thomas, a former world No. 1 and PGA champion, has grown close to the Woods clan and talked in the days leading up to this event about how badly Charlie wants to beat him.

Mike Thomas said young Woods took $1 off him on the putting green Saturday afternoon and said with a laugh, “I'll show him what I got here.” Mike Thomas specializes in working with juniors and spends time with Charlie when he's in Florida.

Thomas, who has multiple PGA Tour titles in each of his last four years, wasn't about to compare this with with his PGA Championship, World Golf Championships or any other of his 13 tour victories. Even so, he called the PNC Championship “100 percent the most enjoyable.”

When his father holed the birdie putt, he said he knew there were 10 teams still on the course and it still felt as though the tournament was over.

“A part of you didn't care who won,” he said. “We were here as father and son to enjoy a special moment.”

That's what Alastair Johnston, the vice chairman at IMG, had in mind when he created this tournament 25 years ago. It started as the Father-Son Challenge. It since has changed into major champions and Players Championship winners competing with a family member — son, daughter, father-in-law, grandson.

The idea was that golf fans would be curious to see the children of great players. Throw in the 11-year-old son of golf's biggest star, and interest surged to new levels. Charlie Woods delivered a great show, unfazed by the 250 spectators (mostly sponsor guests) or the national TV spotlight.

“I'd like to find the right way to tell Charlie that thousands of kids watching at home will be inspired to want to play golf with their dads,” Johnston said. “He wouldn't appreciate it now. But one day he might.”

The PNC Championship has the strongest waiting list in golf, and it's always been that way. Newcomers to the field this year included Woods and Thomas, Bubba Watson and Mark Calcavecchia.

Calcavecchia played with his son Eric. When they finished, the former British Open champion who has been trying to get in the tournament for seven years was asked how it went.

“Nothing short of amazing,” Calcavecchia said. “I'm kind of sad it's over. I feel like a little kid when the carnival leaves town.”

That's about how it felt for Woods.

His son played from tee markers more than 100 yards ahead in some cases, and Woods often waited for Charlie to hit his drive. More times than not, Charlie would look back give him the thumbs-up and Woods didn't even bother hitting his shot.

“I'm proud of how he handled everything,” Woods said.

He said it was “without a doubt” the most fun he's had on the golf course this year. Woods played only nine times because of the COVID-19 pandemic and only once finished in the top 10. But he wasn't about to rank the week with other big moments in his remarkable career.

He said the idea was to enjoy the experience together, “and we did that.”