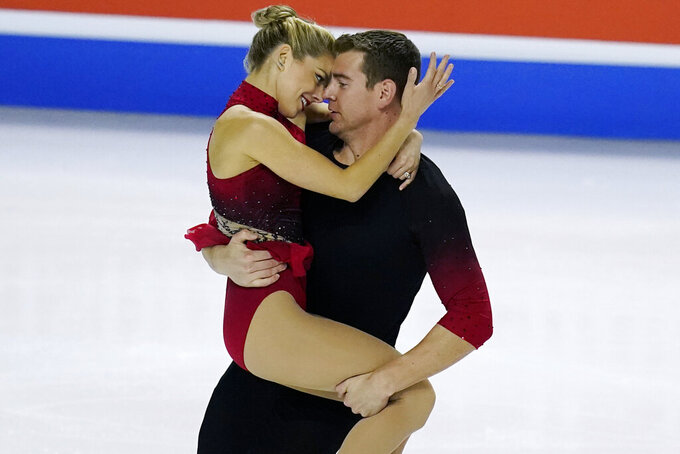 LAS VEGAS (AP) — Staunchly determined to get back her national title, Bradie Tennell took some huge steps Thursday night at the U.S. Figure Skating Championships by winning the short program with an event record.

With a rollicking routine high in difficulty, entertainment value and sheer energy, the 2018 national champion and Olympian outskated two-time defending champ Alysa Liu and pre-event favorite Mariah Bell. Tennell's 79.40 points were the most for a woman at nationals.

“I think that’s the most relaxed I have skated at any competition, it just was so much fun,” she said.

Tennell's strong jumps were no surprise, but her presentation was far superior to past years. She left the ice at Orleans Arena with a huge smile and the satisfaction of a job well done.

Not a full job yet to recapture the title.

“It is one of those things that can be very overwhelming if you dwell on it,” she said of chasing the second gold medal, “so I choose to keep it tucked away in the back of my mind. I would say it is always there, but it isn’t on a billboard, it’s kind of in a drawer.”

Liu, at 15 still too young for senior international events, was second, 3.04 points behind, followed by Bell another 3.99 points back heading into Friday night's free skate.

Liu comes off a year in which she has grown 3 inches, fought through some injuries and had to cut short training. She has dropped some of her most difficult jumps. She replaced a quad and a triple axel with more emphasis on footwork and spins, and worked on facial expressions and artistry.

It certainly showed for the 2020 world juniors bronze medalist.

“I’m pretty pleased with myself," Liu said. ”It’s the program I wanted to do, the program I’ve been practicing for the last few weeks and I’m pretty happy with how I did today.

“No, I didn’t surprise myself too much."

Skate America winner Bell, at 24 a veteran compared to Liu, under-rotated her triple lutz, usually one of her strongest elements, and had an error in footwork. But she also was precise with her spins and her combination jump and had no real regrets.

"The reason that maybe I was a little excited or anxious, honestly has nothing to do with anything other than me being in the moment of my program and just being excited,” she said.

Knierim teamed with husband Chris for the 2018 Olympics, and they won their third national title last year. Chris has since retired, so his wife joined with Frazier, the 2017 U.S. pairs champion with Haven Denney. Knierim and Frazier won Skate America in October, and she won nationals with her husband in 2015, 2018, and 2020.

They scored 77.46 points for a solid lead over Jessica Calalang and Brian Johnson, who were second at 71.3034. Audrey Lu and Misha Mitrofanov were third at 69.56.

“After Skate America, Alexa and I went right back to work and tried working on things to improve our performance and technical from Skate America that we think we made better strides this time around," Frazier said. “Still room for improvement. But overall we’re happy we’re seeing progress each time we get out.”

Calalang thought she and Johnson had a stronger performance at Skate America.

“Our performance today really wasn’t our best, and at Skate America, I believe we skated a little bit better,” she said of the Grand Prix event also held at the Orleans Arena. “In between Skate America and the U.S. Championships, we focused on the overall package, the fine details, technically working on each element and just kind of honing in on the consistency.”

Perhaps the most consistent thing about this pandemic-impacted season is returning to the same site.

“There’s a sense of comfort in something that’s familiar,” Knierim said. "And I think we were able to prepare knowing how Skate America felt and what we needed to the same (level) or better. We are so grateful that we have the opportunity to have a nationals this year and we really couldn’t have asked for a better venue to host it. For Brandon and I as well as many other teams we are very, very happy to be back here again.”