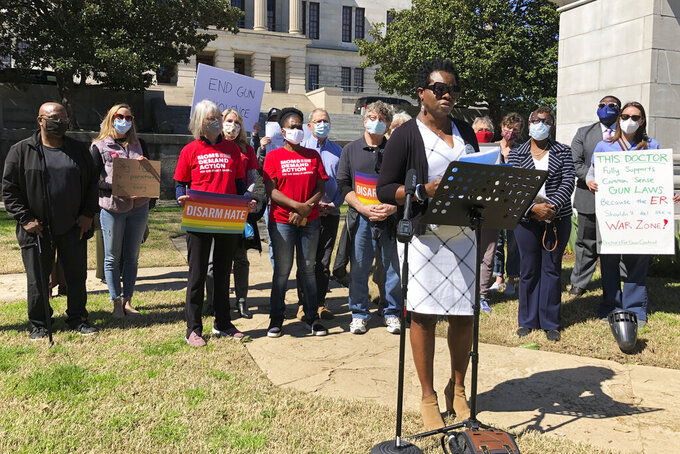 Shaundelle Brooks, appearing with a group of faith leaders, speaks near the Tennessee Capitol Monday, March 29, 2021, in Nashville, Tenn. Brooks spoke against a bill that would lift permitting requirements to carry a handgun. Brooks' son, Akilah DaSilva, was one of four people killed in a shooting at a Nashville Waffle House in 2018. (AP Photo/Jonathan Mattise)

NASHVILLE, Tenn. (AP) — Tennessee Gov. Bill Lee can soon sign off on his proposal to let most adults 21 and older carry handguns — concealed or openly — without a license that now requires a background check and training.

Republican lawmakers in the supermajority finished their work on the bill Monday as it passed the House 64-29, following the Senate's approval earlier this month. Some Republicans defected to vote against the measure, whose opponents include influential law enforcement entities.

A Republican approaching his reelection campaign for 2022, Lee proposed the National Rifle Association-backed legislation last year before the COVID-19 pandemic caused lawmakers to narrow their focus.

Lee and GOP lawmakers have sought to sell the proposal by tying in harsher penalties for those who commit certain gun-related crimes, with the governor setting aside $17.7 million in his budget plan for the bill largely due to an anticipated increase in incarceration.

That hasn't budged Tennessee police chiefs, sheriffs and prosecutors, who consider the state’s existing permit system an important safeguard for knowing who should or shouldn't be carrying a gun.

House Majority Leader William Lamberth said the fee-based permits would still be needed to carry guns across state borders. He said people need to take classes and shoot at the range regularly. But he said getting a permit and training shouldn't stand in the way of Tennesseans carrying a handgun.

“We do not think that you should have to do those things to exercise your 2nd Amendment rights,” said Lamberth, a Republican from Portland. “This is a massive step forward for freedom.”

“Anyone who votes for this legislation tonight, don’t ever say you back the blue,” said Democratic Rep. Bo Mitchell of Nashville.

On Monday outside of the Capitol, Shaundelle Brooks urged the bill's defeat by retelling the story of her son Akila DaSilva, who was one of four people killed in a 2018 shooting at a Waffle House in Nashville. She was joined by a group of faith leaders who collected hundreds of letters opposing the legislation.

“We know our loved ones are never coming back," Brooks said of those who have lost loved ones in shootings. "We don't want your sympathy. We want your action.”

The amendment would have extended permitless carry to firearms other than handguns and to apply to those 18 and older, instead of 21 and up and military members between ages 18 to 20. It also would have deleted the restrictions against people with certain mental illnesses and certain criminal convictions, including misdemeanor stalking.

The push in Tennessee came after Republicans in the General Assembly relaxed the state’s handgun law in 2019 by allowing people to obtain a concealed-carry-only handgun permit that didn’t require them to demonstrate ability to fire a weapon. The new permits became available at the start of 2020.