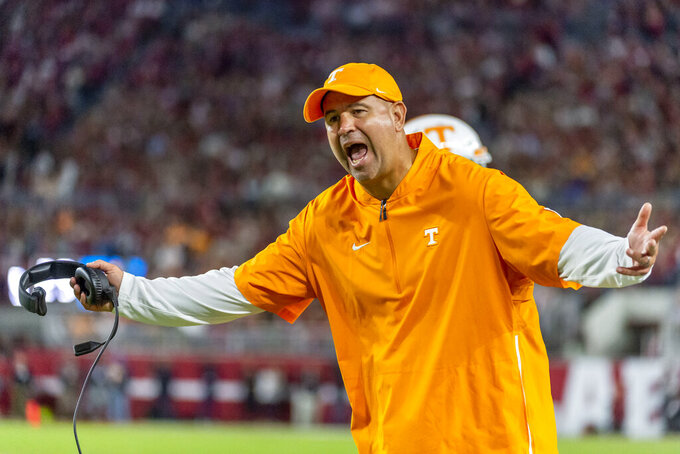 FILE - In this Oct. 19, 2019, file photo, Tennessee head coach Jeremy Pruitt yells at the officials during an NCAA college football game against Alabama in Tuscaloosa, Ala. Pruitt heads into his third season with the Vols' first appearance in The Associated Press rankings since Sept. 10, 2017. (AP Photo/Vasha Hunt, File)

Tennessee proved a season ago it can do more than just compete with the Volunteers winning their final six games, capped by a comeback bowl victory.

Now the Vols must prove they can play that way from the start.

“We obviously have a lot of experience coming back, and we have a lot of people within our program that have a really good understanding," coach Jeremy Pruitt. "I’m talking better players for what we want to do.”

Pruitt heads into his third season with the Vols climbing out of a 1-4 start that had some fans wanting the coach fired. Tennessee also is ranked No. 25, the Vols' first appearance in The Associated Press rankings since Sept. 10, 2017.

Winning eight games for a second straight season won't be easy because of the Southeastern Conference's decision to play a 10-game, league-only schedule.

“From not knowing if we’d play in April to now actually having a schedule, I think it’s very exciting,” center Brandon Kennedy said. “We love to play and we’re ready to play as a team. We’ve been working hard this offseason with the new protocol and everything.”

Senior Jarrett Guarantano is the starter heading into the season despite a shaky performance in the Gator Bowl victory over Indiana. Freshman Harrison Bailey was quarantined because of COVID-19 protocols, and he's competing with J.T. Shrout and Brian Maurer for the backup spot.

Guarantano also is in the same offense for consecutive seasons. He proved his toughness last season playing through death threats, losing his starting job and even playing after breaking a bone in his left, non-throwing arm.

“His resolve to be a starting, winning quarterback at Tennessee has never been questioned,” offensive coordinator Jim Chaney said. “He’s just going on the field and performing at a high level consistently. That’s what we are trying to get done this year with Jarrett. I’m pleased with him. I like the kid a lot.”

Senior left guard Trey Smith didn't allow a sack in 13 games last season and has started 31 of his 32 games. He also goes into his final season as the Vols' lone preseason All-American. Better yet, the 6-foot-6, 330-pound lineman who overcame career-threatening blood clots has been practicing after not practicing at all last season.

Joining Smith is left tackle Wanya Morris and right tackle Darnell Wright back after playing as freshmen and Brandon Kennedy at center. Right guard Cade Mays is appealing the denial of his transfer request after leaving Georgia, which would give the Vols the talented offensive line missing too often in recent seasons.

GONE TO THE NFL

Tennessee has to find replacements for pass rusher Darrell Taylor, a second-round pick by Seattle and wide receivers Jajuan Jennings and Marquez Callaway. Taylor will be tougher to replace after ranking second in the SEC with 8 1/2 sacks last season, and the defense also lost linebacker Daniel Bituli and defensive back Nigel Warrior.

Brandon Johnson and Josh Palmer are seniors along with Velus Jones Jr., a graduate transfer from Southern Cal. Deangelo Gibbs is available after sitting out a year following his transfer from Georgia. Chaney also has five freshmen pushing for playing time, but someone will have to step up to replace the key catches Jennings and Callaway made regularly.

The pandemic means Tennessee will not be able to take advantage of the SEC teams coming to Knoxville or the optimism from the season-ending winning streak. Athletic director Phillip Fulmer announced last week that seating will be limited to 25% of seating capacity starting Oct. 3 against Missouri. The Vols also were limited to only two days of spring practice before the pandemic shut everything down.

The Vols swapped a visit to Oklahoma and other non-conference games against Charlotte, Furman and Troy for much tougher opponents. Tennessee hosts 13th-ranked Texas A&M on Nov. 14 followed by a trip to No. 11 Auburn.

Tennessee now opens the season at South Carolina on Sept. 26 and visits No. 4 Georgia on Oct. 10. No. 3 Alabama and eighth-ranked Florida visit Neyland, though the Gators now help Tennessee conclude the season Dec. 5.