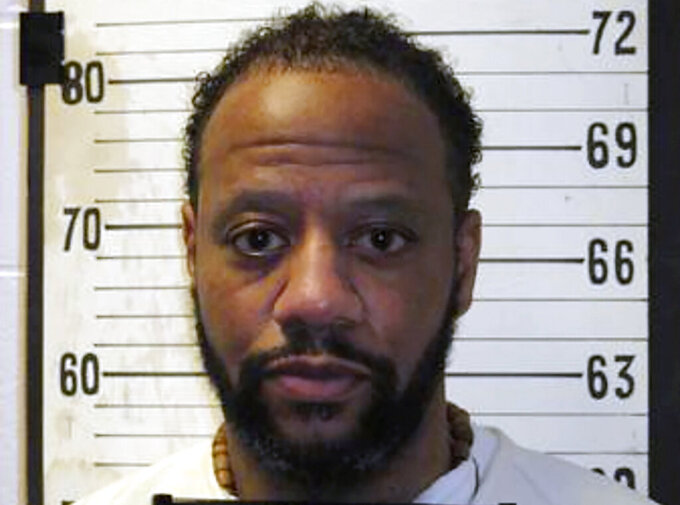 FILE - This file photo provided by Tennessee Department of Correction shows Pervis Payne. An attorney for Payne says DNA evidence belonging to the Tennessee death row inmate has been found on part of a knife used in the slayings of a mother and daughter 33 years ago, but DNA from an unknown man also was found on the murder weapon. Attorney Kelley Henry presented a report on DNA tests on the knife and other evidence ordered by Shelby County Criminal Court Judge Paula Skahan in September 2020. (Tennessee Department of Correction via AP, File)

MEMPHIS, Tenn. (AP) — DNA evidence belonging to a Tennessee death row inmate has been found on part of a knife used in the killings of a mother and daughter 33 years ago, but DNA from an unknown man also was found on the murder weapon, an attorney for Pervis Payne said in a Memphis court Tuesday.

Attorney Kelley Henry presented a report on DNA tests on the knife and other evidence ordered by Shelby County Criminal Court Judge Paula Skahan in September. Henry and the Innocence Project hope results of the tests could exonerate Payne in the 1987 fatal stabbings of Charisse Christopher and her 2-year-old daughter, Lacie Jo. Christopher’s son, Nicholas, who was 3 at the time, also was stabbed but survived. Payne has maintained his innocence.

Payne, 53, had been scheduled to die Dec. 3, but Tennessee Gov. Bill Lee granted a reprieve until April due to challenges created by the coronavirus pandemic. Henry plans to present the DNA testing results to Lee in a push for clemency.

Payne's DNA was found on the hilt of the knife, which matches Payne’s trial testimony that he cut himself while handling the knife as he tried to help the victims after the killings were committed, Henry said. Payne’s DNA was not found on the handle, Henry said.

Partial DNA evidence from an unknown man was found on the knife handle, but there was not enough DNA material to enter it into a national FBI database of DNA profiles collected from convicted felons that could be used to match it to someone else, Henry said.

Prosecutor Steve Jones said the test results do not exclude Payne from being punished for the crime, arguing that it was not clear when the DNA was left on the knife.

“There’s nothing that exonerates Pervis Payne,” said Skahan, the judge.

Henry and the Innocence Project disagreed.

“The DNA testing results are consistent with Pervis Payne’s long-standing claim of innocence,” the Innocence Project said in a statement. “Male DNA from an unknown third party was found on key evidence including the murder weapon, but unfortunately, is too degraded to identify an alternate suspect via the FBI’s database.”

At the time of Payne’s trial, DNA testing of evidence was unavailable, and no testing had been done in his case. A previous request for DNA testing in 2006 was refused on the basis of a Tennessee Supreme Court ruling that has since been overturned.

Payne, who is Black, told police he was at Christopher’s apartment building to meet his girlfriend when heard the victims, who were white, and tried to help them. He said he panicked when he saw a white policeman and ran away.

Prosecutors said Payne was high on cocaine and looking for sex when he killed Christopher and her daughter in a “drug-induced frenzy.”

Court documents say police focused almost exclusively on Payne as a suspect, although nothing in his history suggested he would commit such a crime. He was a minister’s son who was intellectually disabled and never caused problems either as a child or teenager, his lawyers have argued.

State law does not have a way for people who were already convicted to reopen their cases and prove an intellectual disability. The Tennessee Black Caucus of State Legislators has vowed to change that, prefiling a bill that would give Payne and others a chance to prove their disabilities in court.

Henry also complained that scrapings from Christopher’s fingernails, collected from the crime scene, could not be tested. Authorities have not been able to locate them in two property rooms and a forensic center where evidence has been kept since the trial.

“We still want to know where the fingernail scrapings are,” Henry said in court.

Payne was the fourth Tennessee death row inmate to receive a reprieve in 2020 because of the virus.