Texans-Chiefs set to kick off NFL season unlike any other 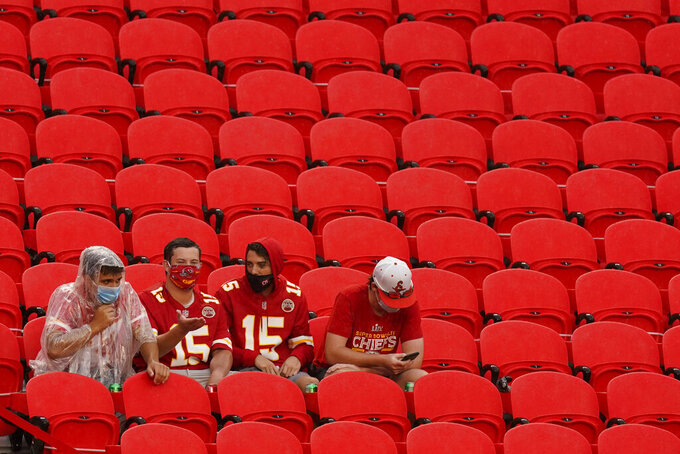 KANSAS CITY, Mo. (AP) — It has been a mere eight months since Patrick Mahomes led Kansas City from a 24-0 hole to beat Deshaun Watson and the Houston Texans in the divisional round of the playoffs, a brutally efficient comeback that ultimately propelled the Chiefs to their first Super Bowl title in 50 years.

A whole lot has changed, though.

The coronavirus pandemic effectively canceled the entire NFL offseason along with all four preseason games. That means their rematch at Arrowhead Stadium on Thursday night will be the first game for anybody since February. It also means the crowd at what is historically one of the toughest road venues in the league will be limited to about 17,000 fans.

The Texans no longer carry star wide receiver DeAndre Hopkins or leading rusher Carlos Hyde on their roster. Chiefs coach Andy Reid no longer carries around the heavy and ignominious tag of best coach never to win a championship.

“You have to expect the unexpected," Mahomes said, “and that's what we're trying to do. We're going to have a game plan for everything, and I'm going to make adjustments as quickly as possible so we can get off to a fast start. Hopefully.”

There are plenty of reasons for both teams to anticipate a good start.

Sure, the Texans' offense underwent a dramatic makeover with the departure of Hopkins and Hyde, but in their place came wide receivers Brandin Cooks and Randall Cobb along with a healthy David Johnson at running back. And their defense has a healthy J.J. Watt, something they only enjoyed for about half of their games last season — and have missed far too often during his outstanding career.

“We have an opportunity going to the defending Super Bowl champs' home stadium right off the bat and compete with a great team. That's what you want,” said Watson, who signed a four-year, $160 million contract extension last week. “This is the best opportunity you can have to start the season.”

That contract extension is the second largest in NFL history. The first: The 10-year extension that Mahomes, the reigning Super Bowl MVP, signed that could ultimately pay him about a half-billion dollars.

Nice paydays for two quarterbacks taken two picks apart in the first round of the 2017 draft.

“These two guys are just great players. Very, very dynamic players,” Texans coach Bill O'Brien said. “It's always interesting how the schedules are made that this is the game that opens up the season, especially with what's gone on. What's gone on the last six months, it's unprecedented. Now you have this game with these two quarterbacks who have done so much early in their careers, its' a great night for the league and a great night for football.”

The Chiefs are among a handful of teams that have been cleared by local and state authorities to have fans for Week 1, but the number was capped at 22% of capacity. Those that attend — almost entirely season ticket holders —- will be required to wear face coverings whenever they are unable to maintain social distancing.

The last time Reid could remember coaching in front of so few fans was as an assistant at San Francisco State in 1985.

“If we were playing UC Davis, we would have that. But it's been a while,” he said. “They had the ultimate jump ball just to get into the stadium, however, that was picked. So I know they'll be revved up and ready to go."

The Chiefs raised their Super Bowl flag last week, when they handed out their rings during an on-field ceremony attended by players, coaches and their family members. But they'll do it again for the crowd during a pregame ceremony.

The flag will join the 1969 championship flag that has flown over Arrowhead Stadium by itself for the past five decades.

The league plans to play “Lift Every Voice And Sing,” which is widely considered the Black national anthem, along with “The Star-Spangled Banner” before games this season as it recognizes social justice initiatives across the country.

Reid and O'Brien both were asked whether their teams plan to kneel Thursday night. Neither coach disclosed their team's plans.

“There will definitely be conversations leading up to the game,” Watt said, “whether it’s within our team alone or with the Chiefs. However it may be, to make sure that whatever everybody does, we’re on the same page.”

Along with some new playmakers on offense, the Texans also have new defensive coordinator Anthony Weaver and special teams coach Tracy Smith. Defensive tackle Ross Blacklock, a second-round pick, was their initial selection in the draft while ex-Chiefs safety Eric Murray is expected to start after spending last season with Cleveland.

“You look at everything that they’ve done last season and even years past that they’ve played against us (and) you try to formulate a game plan,” Mahomes said. “There are going to be very few opportunities, so when you do have them, you need to be sure to execute. I think that’s what you saw in the playoffs.”

Kansas City will play without a trio of players who opted out right guard Laurent Duvernay-Tardif, running back Damien Williams and rookie offensive lineman Lucas Niang. They also will miss cornerback Bashaud Breeland and defensive tackle Mike Pennel, who are suspended for the start of the season.