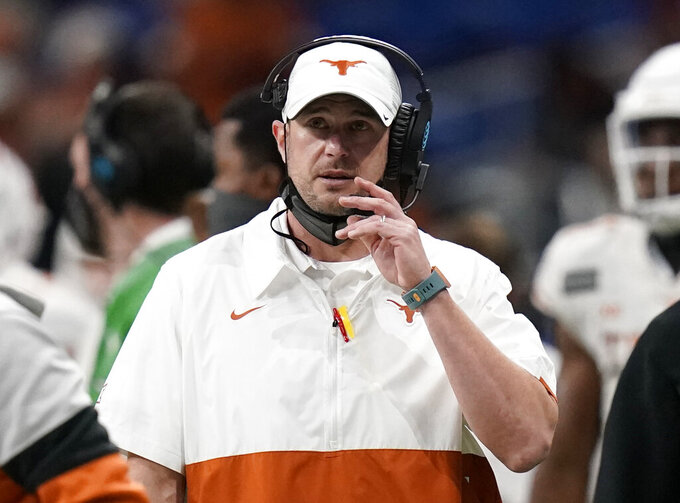 FILE - This Dec. 29, 2020 file photo shows Texas head coach Tom Herman during the second half of the Alamo Bowl NCAA college football game against Colorado in San Antonio. Texas has fired football Herman, Saturday, Jan. 2, 2021, after four seasons of failing to win a Big 12 championship and making only one appearance in the league title game. (AP Photo/Eric Gay, File)

AUSTIN, Texas (AP) — Texas got tired of waiting for Tom Herman to deliver a Big 12 title and turn the Longhorns back into a national championship contenders.

Texas fired Herman on Saturday after four seasons that produced four bowl wins but just one appearance in the league championship game and routinely fell frustratingly short of expectations.

Herman still had three seasons left on a guaranteed contract that was due to pay him more than $6 million per year. Firing him means Texas will soon be on its fourth head coach in a decade. Texas last won the Big 12 title in 2009 under Mack Brown.

Herman was supposed to end that drought. He was college football’s hottest young coach when Texas brought him from Houston to replace Charlie Strong in 2016. But Herman’s results never matched his swagger: He never had a losing season and won four bowl games at Texas, including last week's Alamo Bowl. But he couldn’t return the Longhorns to consistent league or national title contenders. He was just 1-4 against the archrival Oklahoma and leaves Texas 32-18 overall.

In a statement Saturday, the school said while the team has made “measured progress," it was time to change. The decision came just a few weeks after athletic director Chris Del Conte said Herman would remain the coach.

The statement said that after a review of the program, Del Conte recommended to school leadership that Herman be fired.

“After much deliberation and a great deal of thought, as I looked back at the totality of where our football program is and in discussing its future, it became apparent that it was in the best interest of the University of Texas to move in a different direction," Del Conte said.

Herman’s best season was 2018, the only time the Longhorn won the Big 12 title game while he was there. They finished that season with a dominating win over Georgia in the Sugar Bowl that prompted quarterback Sam Ehlinger’s now-infamous “We’re ba-aack!” statement to a national television audience.

Texas instead sunk back to the middle of the pack in the Big 12. The Longhorns reached as high as No. 8 early in the pandemic-stricken 2020 season before quickly fading. They were, in effect, eliminated from the Big 12 title game with a 23-20 home loss to Iowa State with two games left.

Frustrated by the stagnation, Texas saw ominous signs. Several of the state’s top recruits have either pulled back from early commitments to the Longhorns or have already announced plans to head elsewhere.

Texas had given Herman a two-year contract extension after the 2018 season and the parting means Texas owes him a buyout in excess of $15 million, and several million more to assistant coaches who had multiyear guaranteed contracts. Herman had just rebuilt his staff with seven new assistants, including new offensive and defensive coordinators, after the 2019 season.

Those expenses come a few months after the athletic department announced dozens of layoffs and salary cuts because of the heavy economic damage from the pandemic.

Texas could offer those contracts because the school operates one of the biggest, richest athletic departments in the country, and its fan base demands a level of excellence to scale.

Herman, 45, seemed to be the sure-fire candidate to match results with the high expectations after two successful seasons at Houston. Yet there were moments that suggested he wasn’t ready for the Texas job when he got it and then struggled to grow into it.

He taunted the Missouri quarterback in the waning minutes of a Texas Bowl win in 2017. He had a fiery confrontation with Oklahoma State coach Mike Gundy after a tough road loss. In 2019, he head-butted his own players before a game, then flipped a double-barreled obscene hand gesture toward television cameras during live broadcast of national signing day.

And 2020 challenged him in ways that had nothing to do with football.

When protests erupted nationally erupted after the death of George Floyd, Herman joined his players in a march from campus to the state Capitol in a demonstration against police brutality and and racial injustice.

Herman then faced intense criticism from fans, and pressure from the administration, when the players didn’t join the traditional postgame singing of “The Eyes of Texas” school song for several games in protest over racist elements of the song’s past.