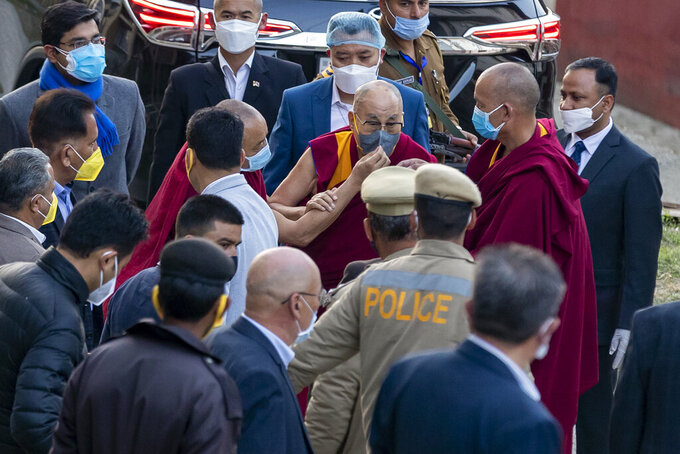 An attendant monk adjusts the face mask on Tibetan spiritual leader the Dalai Lama as he arrives at the Zonal Hospital to receive a COVID-19 vaccine in Dharmsala, India, Saturday, March 6, 2021. Medical officers confirmed that the Tibetan leader got the Covishield vaccine and is not showing any adverse reaction to the vaccine. (AP Photo/Ashwini Bhatia)

DHARMSALA, India (AP) — The Dalai Lama, the 85-year-old Tibetan spiritual leader, was administered the first shot of the coronavirus vaccine on Saturday at a hospital in the north Indian hill town of Dharmsala.

After receiving the injection, he urged people to come forward, be brave and get vaccinated.

“In order to prevent some serious problems, this injection is very, very helpful,” he said.

Dr. G.D. Gupta of Zonal Hospital, where the shot was administered, told reporters that the Dalai Lama was observed for 30 minutes afterward. “He offered to come to the hospital like a common man to get himself vaccinated,” he said.

Ten other people who live in the Dalai Lama's residence were also vaccinated, Gupta said. All eleven received the Covishield vaccine, which was developed by Oxford University and U.K.-based drugmaker AstraZeneca, and manufactured by the Serum Institute of India.

The Dalai Lama made Dharmsala his headquarters in 1959, fleeing Tibet after a failed uprising against Chinese rule. China doesn’t recognize the Tibetan government-in-exile and accuses the Dalai Lama of seeking to separate Tibet from China.

The Dalai Lama denies being a separatist and says he merely advocates for substantial autonomy and protection of the region’s native Buddhist culture.

India has confirmed more than 11 million cases of the coronavirus and over 157,000 deaths. The country, which has the second-highest caseload in the world behind the U.S., rolled out its vaccination drive in January, starting with health care and front-line workers. Earlier this month, it expanded its inoculation drive to older people and those with medical conditions that put them at risk.