Time's Up study: Many who report harassment face retaliation 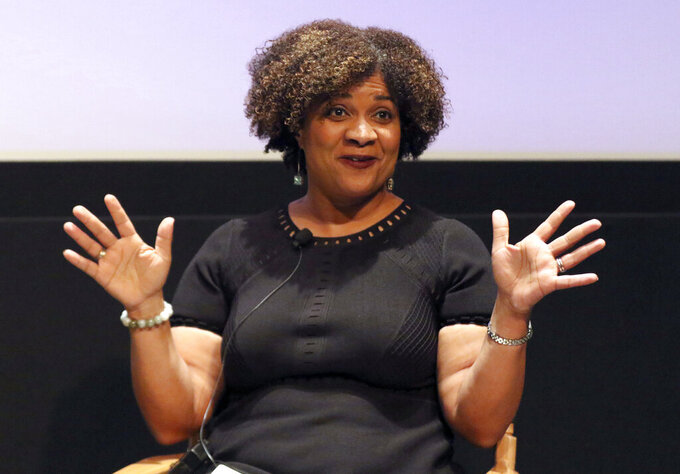 FILE - In this Dec. 8, 2017, file photo, Fatima Goss Graves speaks at a discussion about sexual harassment and how to create lasting change from the scandal roiling Hollywood at United Talent Agency in Beverly Hills, Calif. Three years into the #MeToo movement, there may be more awareness around workplace sexual harassment. But a new report finds that almost three-quarters of people reporting such harassment suffer from retaliation if they complain. The study was conducted by the National Women’s Law Center, which houses and administers the Time’s Up Legal Defense Fund. Graves, president and CEO of the law center and co-founder of the fund, said the scenarios outlined in the report should sound "an alarm to legislators and policymakers: Until harassers are held accountable, workplaces will remain unsafe for everyone.” (Photo by Willy Sanjuan/Invision/AP)

Three years into the #MeToo movement, there may be more awareness around workplace sexual harassment. But a new report finds that almost three-quarters of people reporting such harassment suffer from retaliation if they complain.

More than 7 out of 10 people who reported sexual harassment at the workplace said they faced some form of retaliation, up to and including being fired, said the report. It analyzed 3,317 online requests for legal help from the Time’s Up Legal Defense Fund, between January 2018 and the end of April 2020.

The finding on retaliation was one of the most striking of the broad-ranging report, shared with The Associated Press ahead of its release Thursday. It also found that workplace harassment severely impacted workers’ economic, physical and mental health, and that often, people were subjected to more than one form of workplace harassment — both sexual and racial, for example.

The study was conducted by the National Women’s Law Center, which houses and administers the Time’s Up Legal Defense Fund, launched in early 2018 to help workers who otherwise wouldn’t be able to afford to take their complaints of sexual misconduct to court. It connects them with legal assistance and in some cases helps defray costs.

The number of people reporting retaliation was “shocking,” said Sharyn Tejani, director of the fund.

“Retaliation takes all different forms,” she said. “Losing your job, losing shifts, losing pay — or if you've already lost your job, you can’t find another job in that industry.”

On top of that, Tejani noted, is the further complication of the coronavirus pandemic. “So now you have a situation where there’s incredibly high unemployment, some jobs are going away and never coming back, and so for all the reasons that people are afraid of reporting and afraid of being retaliated against, COVID-19, like it does with so many things, makes it so much worse and so much more problematic."

Tejani said the study was conducted nearly three years into the fund's operations “to see if the trends we were noticing were really going on, and also because we know that secrecy helps sexual harassment flourish. The more we can talk about it, (we can) let people know, ‘You are not alone, this isn’t anything that you did, this is about how workplaces are and how they shouldn’t be.'”

The report found that power dynamics remain a strong factor fueling sexual harassment. More than half, 56%, of workers who identified their harasser in their online requests said it was someone they reported to.

And often, harassers were not held accountable; nearly two in five people, 37%, said nothing happened to the perpetrator.

Tejani said that here, too, the pandemic has exacerbated an already difficult situation.

“When you have a huge power differential there is more likely to be harassment,” Tejani said. “Because of all the economic stressors, COVID-19 increases the power a supervisor can have, because people are so much closer to the edge, and much more willing to put up with things in order to keep a job."

Fatima Goss Graves, president and CEO of the law center and co-founder of the fund, said the scenarios outlined in the report should sound "an alarm to legislators and policymakers: Until harassers are held accountable, workplaces will remain unsafe for everyone.”

In a statement, she said the findings “reveal the courage it takes for people to come forward and report the harassment and abuse they're experiencing in the workplace.”

— Of those who experienced retaliation, 36% said they were fired, and 19% said they'd experienced poor performance evaluations, or were otherwise treated poorly at work.

— Most people reported harassment to their employer, 64%, rather than a government agency, court or law enforcement.

— Nearly a third (29%) of those who reported harassment said nothing was ever done about it.

— Nearly one in five people (19%) said the harassment had a damaging impact on their mental health.

Tina Tchen, president and CEO of the Time's Up Foundation, noted a positive sign in the findings, which is that more survivors are coming forward.

“While it's outrageous that sexual harassment and assault at work remain so prevalent, it's inspiring to see so many survivors rise up to fight back,” Tchen said. “If one thing's clear, it's that we're never going back to the days where sexual harassment will remain hidden in the shadows — and that's a good thing.”

A landmark 2016 report on sexual harassment by the Equal Employment Opportunity Commission said roughly three out of four people who experienced harassment never reported it “because they fear disbelief of their claim, inaction on their claim, blame, or social or professional retaliation.”