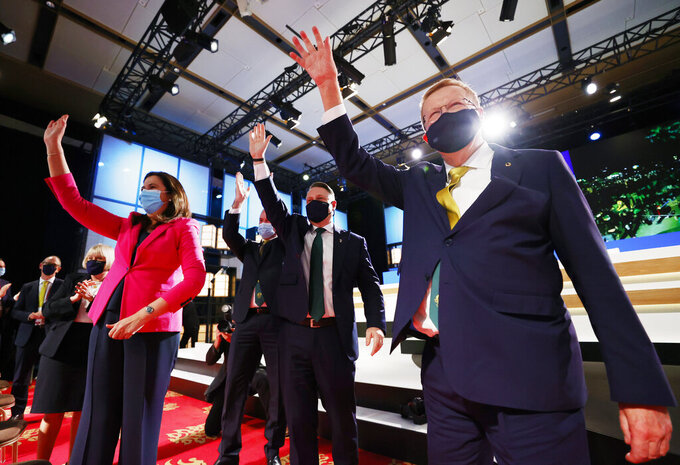 Members of the Brisbane 2032 delegation, from left, the Honourable Annastacia Palaszczuk MP, Premier of Queensland and Minister for Trade, the Right Honourable the Lord Mayor of Brisbane, Councillor Adrian Schrinner, and John Coates AC, President, Australian Olympic Committee, celebrate after Brisbane was announced as the 2032 Summer Olympics host city during the IOC Session at Hotel Okura in Tokyo, Wednesday, July 21, 2021. (Toru Hanai/Pool Photo via AP)

BRISBANE, Australia (AP) — How about this for an Olympic-scale list of world cities: Athens, Beijing, London, Rio, Tokyo, Paris, Los Angeles and, wait for it, Brisbane.

Since the Summer Games were last hosted in Australia, at Sydney in 2000, and when they’ll return Down Under in 2032, the Olympics have been held in some of the world’s most famous cities.

Brisbane, the capital of Queensland state and Australia’s third-largest city, is an outlier. It’s aiming to produce an Olympics more like Barcelona in 1992 than London or Beijing.

It's not a so-called top-tier world city but combined with close neighbors and Olympic co-hosts in the southeast corner of Queensland, the region has some of Australia's most iconic beaches on the Gold and Sunshine Coasts.

Thousands of people crowded into an Olympic live site on the South Bank, watching on a big screen and looking across the Brisbane River at the downtown area when the International Olympic Committee confirmed Wednesday at a meeting in Tokyo what had long been considered a sure thing: that Brisbane will host the games in 2032.

Fireworks burst over the river and high-rise buildings in the city as people cheered, danced and celebrated the confirmation of southeast Queensland’s bid.

The exclusive negotiation rights granted to Brisbane made it almost a foregone conclusion, which only gave people in Brisbane, the Gold Coast and Sunshine Coasts more reason to celebrate.

The Olympic live sites opened early Wednesday when Australia's softball team opened the Olympic competition program in a loss to Japan, two days before the opening ceremony of the Tokyo Games.

The sites will remain open across Australia for the duration of the Tokyo Olympics, which are essentially a made-for-TV event considering no fans are allowed into most competition venues because of COVID-19 restrictions.

Brisbane, pronounced Brisb'n and otherwise known by locals as Brissie or Brisvegas, is at the heart of one of Australia's fastest growing regions.

Harvey Lister, the executive chairman of ASM Global which runs one of Brisbane's major stadiums and is pushing plans for a downtown site to host swimming during the 2032 Games, said Brisbane and southeast are aiming to deliver a games along the lines of the Barcelona Olympics in 1992.

The region has hosted the Commonwealth Games twice — at Brisbane in 1982 and on the Gold Coast in 2018. Brisbane redeveloped the South Bank to host the World Expo in 1988, and also staged the Goodwill Games in 2001, the G20 Summit in 2014 and matches in the Cricket World Cup, Rugby World Cup and soccer's Asian Cup tournaments.

The 2032 deal looked done months before the formal decision at the IOC meeting, after Brisbane was given exclusive negotiating rights in February.

“We want to show the world that mid-sized cities and regions can host the games without financial distress or missed deadlines,” Palaszczuk told voters.

The politicians were joined by longtime Australian Olympic power broker John Coates, now an IOC vice president, who was involved in Sydney's bid and organization of the 2000 Olympics and shaped the fast-track selection process two years ago.

Coates was involved in Brisbane's bid for the 1992 Olympics, when the Spanish city of Barcelona won the rights.

“Today’s vote is a vote of trust that Brisbane and Queensland will stage magnificent Olympic and Paralympic Games 2032," IOC President Thomas Bach said. “The Brisbane 2032 vision and games plan fit into long-term regional and national strategies for social and economic development.”

Australian Prime Minister Scott Morrison, who presented to the IOC meeting via video-link, said: "We know it’s a huge opportunity for our nation, just like the Melbourne Games in 1956 and the Sydney Olympics in 2000.”

Coates thanked the IOC for its confidence in Brisbane, the first host selected under the new criteria.

“This is a very proud day for Australia, make no mistake," he said. "The Olympic Games in Brisbane will be in the most diligent, grateful and enthusiastic hands. And I make this commitment to the athletes of the world — we will provide you with an unforgettable experience.

The 2032 bid was shaped six years ago when the mayors of southeast Queensland undertook a feasibility study to determine what the Olympics could deliver for the region.

“Australians like to have a go," Coates said. “Of course, the starter’s gun has only just been fired and the real work now begins.”

The operational costs of the games have been estimated at almost 5 billion Australian dollars ($3.7 billion), a figure Coates said would be offset by a contribution from the IOC as well as sponsorship and ticket sales.

The Sydney 2000 Games were characterized by the laid-back approach and the smiling faces of volunteers, and described by then IOC president Juan Antonio Samaranch as the best Olympics ever. Brisbane's backers are promising another event with a truly Australian flavor.

Between now and then, Tokyo will host its postponed games — with no fans — with Paris to host the Summer Games in 2024 and Los Angeles in 2028.