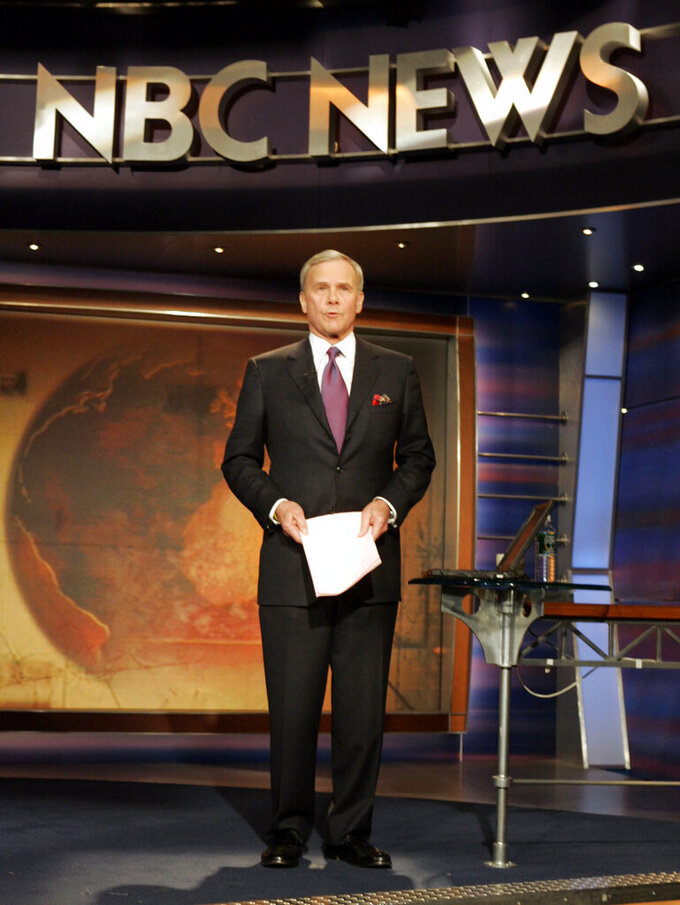 FILE - "NBC Nightly News" anchor Tom Brokaw delivers his final broadcast, in New York Wednesday Dec. 1, 2004. Brokaw says he is retiring from NBC News after working at the network for 55 years. The author of "The Greatest Generation" is now 80 years old and his television appearances have been limited in recent years as he fought cancer. He says he will continue writing books and articles. (AP Photo/Richard Drew, File)

Brokaw, who is 80, said he'll continue writing books and articles. He's the author of “The Greatest Generation,” about those who fought World War II.

In a final essay that appeared on MSNBC's “Morning Joe” on Dec. 30, Brokaw hinted at his announcement by reflecting on a career that took him from breaking into a local newscast in Nebraska and announcing the death of President John F. Kennedy, to coronavirus.

“For me, it's been an amazing journey — 57 years as a reporter," Brokaw said.

Fifty-five of those years were at NBC News, starting as a reporter in Los Angeles in the 1960s, covering the White House during the Nixon administration, hosting the “Today” show in the late 1970s and more than 20 years as “Nightly News” anchor.

For two decades, the triumvirate of Brokaw, ABC’s Peter Jennings and CBS’ Dan Rather were the nation’s most visible broadcasters, anchoring major stories like the Sept. 11, 2001 terrorist attacks, the disputed 2000 election and the fall of the Berlin Wall.

After giving way at “Nightly News” to Brian Williams in 2004, Brokaw concentrated primarily on historical programming and commentary during big moments, like elections.

For health reasons, his appearances have been more sporadic lately. In 2013, Brokaw was diagnosed with multiple myeloma, an incurable blood cancer that affects the bone marrow. He did not return a message seeking comment on Friday.

During his final essay last month, Brokaw reviewed some of the events of 2020. He took a swipe at former President Donald Trump and his “bizarre refusal” to accept the election results. “Before too long, his principal audience will be his caddies,” he said.

Brokaw said the coronavirus pandemic, which has killed more than 400,000 Americans in the past year, was the country's greatest test since the Civil War.

“We still have miles to go and no assurances of just how it will all turn out,” he said.