Tonywatch: Aaron Tveit rides a roller coaster of a year 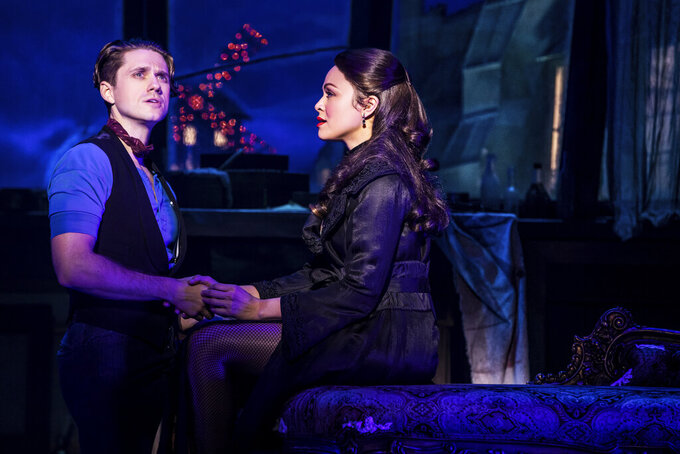 Aaron Tveit, left, appears with Karen Olivo during a performance of "Moulin Rouge! The Musical," in New York. Tveit was the only actor nominated for a Tony in the category of best leading actor in a musical for his role. (Matthew Murphy/Boneau/Bryan-Brown via AP)

NEW YORK (AP) — Even in a crazy year with so many ups and downs, consider the last 12 months of Aaron Tveit.

The Broadway star was wowing fans in “Moulin Rouge! The Musical” when it was suddenly shuttered by the coronavirus. Then he contracted COVID-19 himself. He recovered to lend his voice to relief efforts, got a few high-profile acting gigs and then landed his first Tony nomination.

Two back-to-back blows came within weeks last March when his show was shuttered and then Tveit became one of the first Broadway actors to speak publicly about contracting COVID-19.

"I wanted to kind of say, ‘Look, I’m somebody that really takes care of my health and I’d like to think I’m in good shape.’ I was basically trying to say, ‘This can affect anyone. Please take this seriously,’” he said.

Tveit, 37, says he now suspects he was sicker than he thought at the time. For several weeks, he slept 13 hours a day but thankfully, his lungs weren't affected. “It was like a terrible, terrible sinus infection.”

A few weeks later, he had a flare-up. “In terms of lasting effects, I think I’ve been OK,” he said. “I know a lot of people that really, really suffered. So I consider myself very lucky that I got by with as mild a case as I did.”

Tveit summoned the strength to lend his support for out-of-work actors — joining stars like Sutton Foster and Jeremy Jordan for a benefit concert hosted by Rosie O’Donnell and later singing “Marry Me a Little” for a Stephen Sondheim birthday celebration.

“It felt so meaningful to me to be included but also the message behind it: We can still be a community, we can still learn how to come together even under these circumstances," he said.

With “Moulin Rouge!” grounded, Tveit found work elsewhere. Over the summer, he shot a Hallmark Channel Christmas movie with Laura Osnes and flew to Vancouver to work on the Apple TV+ series “Schmigadoon!”

“Gratitude doesn’t even describe how I feel,” he said of the employment. “I think about it every day because I know so many people who have not been able to work at all. The question of paying rent, of being able to support families and pay bills — it’s it’s truly devastating.”

Tveit's first big gig was in a “Rent” tour and he made his Broadway debut as a replacement in “Hairspray” and then “Wicked.” He then had three starring roles in “Next to Normal,” “Catch Me If You Can” and now “Moulin Rouge!” His film work includes the adaptation of "Les Misérables" and on TV he was in “Graceland,” “BrainDead” and “Grease Live!”

A bright spot in a dark year was when “Moulin Rouge!” earned more than a dozen Tony nominations, which the company celebrated with a Zoom toast. “I’d like to think that our show would have done as well in any year. So I’m very proud of the work that we’ve done,” he said.

Tveit was the only actor nominated in the category of best leading actor in a musical for his role as Christian and it marks his first nomination. Unopposed, he’s poised to win, as long as 60% of Tony voters vote for him in the category.

“It’s the most wild thing that it just worked out that way. But I’m just so grateful and I take it as nothing but as a recognition of the hard work that I put into the show,” he said.

"I’m thrilled he’s received his first Tony nomination for his performance, which reflects not only his work on ‘Moulin Rouge!’ but also Aaron’s vast body of work that brings his career journey to this special moment,“ she said.

Tveit sees something of a silver lining in the Broadway shutdown: Long unaddressed social issues are being examined, top among them racial representation on both sides of the curtain.

“I’ve done a lot of listening,” he said. “I've tried to just shut my mouth and listen to everything around me and what people need and what people feel and then look at how personally I may or may not be helping.”

When Broadway restarts, he hopes the hard work can continue of ensuring all people have equal access to theater work, not just friends or those recommended.

“I think that if that means for a while making a concentrated effort to look beyond the norm, then maybe five or 10 years from now hopefully we'll be in a much better place,” he said.