Too risky? Fed pressed to expand aid to some businesses 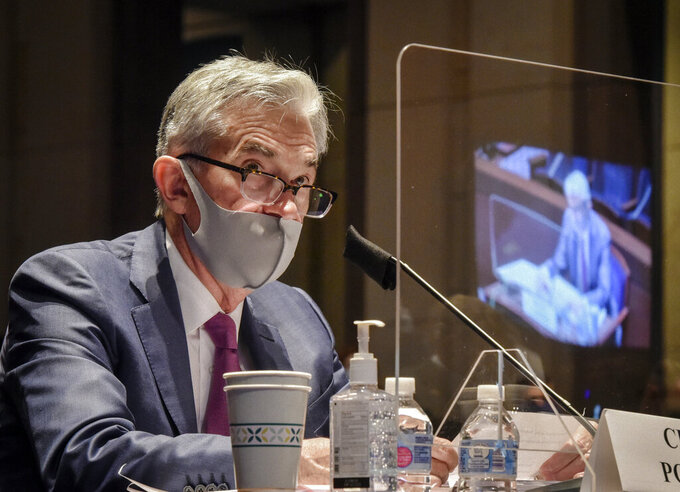 FILE - In this June 30, 2020, file photo Federal Reserve Board Chairman Jerome Powell, reflected in the sneeze guard set up between himself and members of the House Committee on Financial Services, speaks during a hearing on oversight of the Treasury Department and Federal Reserve pandemic response on Capitol Hill in Washington. With the economy still in the pandemic’s grip, the Federal Reserve is facing a decision on whether to stretch an emergency lending program in a way that could bring more risk for the government and taxpayers. Lawmakers are pressing the central bank to deliver more aid to struggling small and mid-sized businesses. (Bill O'Leary/The Washington Post via AP, Pool)

WASHINGTON (AP) — With the economy still in the pandemic’s grip, the Federal Reserve is facing a decision on whether to stretch an emergency lending program in a way that could bring more risk for the government and taxpayers. Lawmakers are pressing the central bank to deliver more aid to struggling small and mid-sized businesses.

The economic recovery has been uneven and painfully slow in the wake of shutdowns from the coronavirus. The pandemic has killed some 180,000 people in the U.S., and the number of laid-off workers collecting jobless benefits exceeds 14.5 million.

And now many lawmakers are asking the Fed to expand its lending to small and medium-sized businesses, by allowing companies to offer assets such as commercial properties as collateral. They warn that hard-hit hotels and shopping malls could suffer a huge wave of foreclosures, hurting local communities and jobs across the country.

“Inaction would be disastrous for taxpayers, for employees, for communities,” Rep. Van Taylor, a Texas Republican who is a leader of the bipartisan effort, said in an interview. He said the point is to save the jobs of the anxious hotel housekeepers, shift supervisors and other employees he’s heard from, most of them minorities.

The decision is on the doorstep of Fed Chairman Jay Powell and Steven Mnuchin, the Trump administration’s treasury secretary. Using money from Congress’ coronavirus relief package, the Treasury Department is guaranteeing the Fed’s lending programs — hundreds of billions each — to corporations, smaller businesses and state and local governments.

Powell and Mnuchin have said they’re considering the option.

But some critics say the lending expansion would be risky, and might actually help big investors in the companies rather than the workers.

The Fed faces a sort of Goldilocks dilemma over risk: How much is just right? With the prospect of continued economic hardship and severe unemployment on the near horizon, the central bank has to balance the benefits of government aid against the risk of losses to taxpayers.

The economic disruptions caused by the coronavirus health crisis called for massive federal aid programs, unprecedented in scope. U.S. taxpayers are funding them. So if a company fails after receiving a government emergency loan and can’t repay it, taxpayers take the loss.

Lawmakers are pressing for a broader approach in part because the Fed’s Main Street lending program for small and mid-sized businesses, to which it’s committing up to $600 billion, has had a slow start, with only modest borrower interest. They want the Fed to allow companies to qualify based on assets such as commercial properties, rather than measures of financial condition.

But Bharat Ramamurti, a Democratic appointee to the new Congressional Oversight Commission, says he has serious concerns. “It’s risky because it can be hard for the Fed to accurately appraise assets right now,” he told The Associated Press. “And in some important cases like hotels, it would help deep-pocketed property owners like private equity firms without any guarantee of helping bellhops and waitstaff and housekeepers.”

The only one of four members on the oversight panel who isn’t a member of Congress, Ramamurti was a senior policy adviser to Sen. Elizabeth Warren, a leading Democratic critic of Wall Street and corporations.

Leveraging the funds from Congress’ relief package, the Treasury Department is guaranteeing trillions of dollars — up to $4.5 trillion — in the Fed’s lending programs. The financial wizardry rests on a key assumption: The companies receiving the loans are deemed likely to repay once the crisis has passed and the economy has recovered.

Mnuchin has laid out the administration’s gamble. He says it’s possible that the government could lose some of the money it puts up. “Our intention is that we expect to take some losses. That’s our base-case scenario,” Mnuchin told Congress.

Mnuchin has spoken approvingly of the results from the $425 billion bailout of banks and automakers during the 2008-09 financial crisis, under the administrations of George W. Bush and then Barack Obama. In that case the government took stakes in the companies and finished with a $15 billion profit for taxpayers several years later as the economy recovered, the companies repaid their loans and their stock prices rebounded.

Powell, for his part, said, “We continue to be open to playing with the formula and making adjustments.” However, he added, “More debt may not be the answer here; debt doesn’t solve every problem.”

The Fed could play it fairly safe, lending to “fallen angel” companies that were in sound financial shape before the pandemic but then were starved of cash by the economic disruption. In that case the central bank may be accused of helping businesses that could borrow in the private markets and don’t need government aid. If it makes riskier loans, the Fed may be seen as propping up teetering “zombie” businesses that could default on payments. By law, the Fed cannot lend to insolvent companies.

The bipartisan group of over 100 U.S. House members pushing the changes, led by Reps. Taylor and Al Lawson, D-Fla., have asked Mnuchin and Powell to set up a Treasury-backed lending program for struggling companies that issue debt tied to their commercial mortgages, which is bought by investors.

The chairman of the Senate Banking Committee, Mike Crapo, R-Idaho, also has made the case to Mnuchin and Powell, though proposing a somewhat different approach. And the two Republican members of the oversight commission, Rep. French Hill of Arkansas and Sen. Pat Toomey of Pennsylvania, said in a hearing that assessing companies’ ability to repay based on the value of their commercial properties, rather than just financial condition or cash flow, could help hotel workers by keeping the businesses afloat.