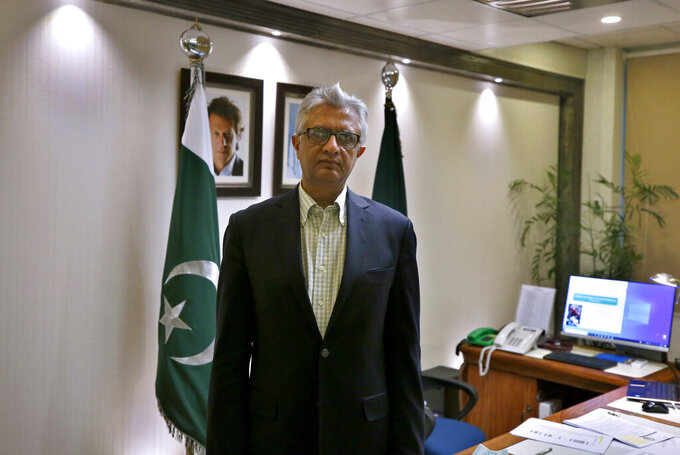 Pakistan's top health official Faisal Sultan poses for photograph at his office in Islamabad, Pakistan, Monday, May 24, 2021. Sultan who is overseeing the country's response to coronavirus said Monday the new COVID-19 variant that devastated neighboring India by causing record infections and deaths had not been found in Pakistan yet. (AP Photo/Anjum Naveed)

Faisal Sultan said Pakistan was still in the middle of a third wave of infections that began earlier this year, flooding hospitals with COVID patients. But he said he hoped the tide of new cases would subside in the coming weeks.

“I don't foresee an India-like situation in Pakistan," he told The Associated Press.

Pakistan recently offered medical aid to India to help handle the COVID-19 crisis there, but the Foreign Ministry says New Delhi did not respond. Pakistan and India have a history of bitter relations and they have fought two of their wars over Kashmir since gaining independence from Britain in 1947.

Sultan said Pakistan avoided a similar scenario to India because thousands of beds were added to hospitals and the production of oxygen was increased as part of a contingency plan.

However, Sultan said that “we are not out of the woods yet" and people should get vaccinated if they want to return to a normal life.

His comments came hours after Pakistan reported one of the lowest single-day death tolls from COVID-19 in recent months, with 57 fatalities

Pakistan has repeatedly expressed grief over the COVID-19 situation in India, where authorities reported 4,454 new deaths in the last 24 hours, bringing India’s total fatalities from the virus to 303,720 out of 27 million cases.

Sultan said Pakistan would try to vaccinate a third of the country's population by the end of this year. “Pakistan is offering free vaccinations to all, there is no discrimination between rich and poor," Sultan said.

The government offers Pakistanis the Chinese-made Sinovac, Sinopharm and CanSino vaccines as well as AstraZeneca doses.

Sultan said the Pakistani government has so far vaccinated more than 5 million people, compared to only 35,000 who were vaccinated with doses imported commercially.

He said Pakistan after months of wait received its first supply of COVID-19 vaccines through the U.N.-backed COVAX initiative, over 1.2 million doses of the Oxford-AstraZeneca vaccine, earlier this month. However, he said Pakistan is relying on vaccines purchased from China and enough funds were available for such purchases.