Torino scorer Nkoulou takes a knee as Serie A resumes 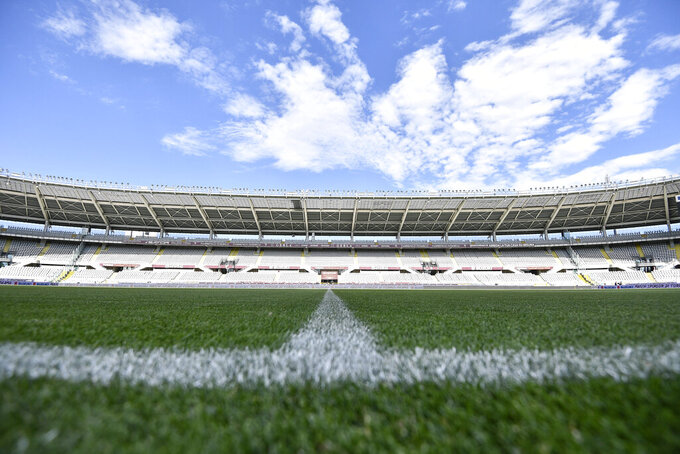 The stands are empty ahead of the Serie A soccer match between Torino and Parma, at the Olympic Stadium in Turin, Italy, Saturday, June 20, 2020. Serie A restarts Saturday with matches being played without spectators because of the coronavirus lockdown. (Fabio Ferrari/LaPresse via AP) 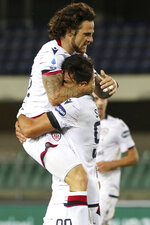 MILAN (AP) — The first Serie A goal in 103 days was marked by scorer Nicolas Nkoulou taking a knee as the Italian league resumed with tributes for the country's healthcare workers and victims of the coronavirus pandemic.

Nkoulou, who is Black, took a knee in a show of support for the Black Lives Matter movement and in honor of George Floyd after heading in Torino’s opener in the 15th minute.

“When I scored I immediately thought of my brother Floyd who is important to me,” Nkoulou said. Floyd, a handcuffed Black man, died on May 25 after a Minneapolis police officer pressed his knee into Floyd’s neck for nearly eight minutes.

Torino went on to draw 1-1 with Parma in the first Serie A game since the league was shut down more than three months ago amid the coronavirus pandemic.

All matches are being played without fans.

“It’s about a different kind of soccer, if we want to call it soccer,” Parma coach Roberto D’Aversa said. “But we knew it would be like this, we need to finish the season, there are economic interests and we have to get used to it.

“I hope this situation lasts as little as possible, soccer belongs to everyone...I hope that this can all be sorted out and that we can return to true soccer.”

Torino players wore a special kit with a message for healthcare workers on the players’ jerseys: “Thank you to all the heroes.”

There was also a minute’s silence before kickoff in tribute to those who have died in the pandemic.

Italy has been one of the hardest hit countries by the coronavirus, with nearly 35,000 deaths attributed to COVID-19. It was also the first country in Europe to shut down its soccer league on March 9.

In Turin, Juraj Kucka leveled for Parma in the 31st. Torino should have restored its advantage three minutes into the second half when it was awarded a penalty following a foul by Simone Iacoponi on Simone Edera.

Torino, which had lost its previous six league matches before the shutdown, moved three points above the relegation zone.

Parma moved up to eighth, two points below Verona and three off a European spot.

“I have to say I thought it would be worse for the physical part but I felt fairly good even if towards the end of the first half there were moments when I thought about calling an ambulance,” Kucka said with a laugh.

Walter Zenga finally got his debut on the Cagliari bench in an eventful match which saw two players sent off.

Zenga replaced Rolando Maran as coach on March 3 but had to wait for his first game in charge because of the shutdown.

Samuel Di Carmine scored twice for Verona in the first half before forward Fabio Borini was shown a straight red card for a tackle on Cagliari midfielder Marko Rog.

Giovanni Simeone pulled one back for Cagliari two minutes before the break but the visiting team also had a player sent off when midfielder Luca Cigarini was shown a second yellow 20 minutes from time.