Toronto to fine people for not distancing in parks, squares 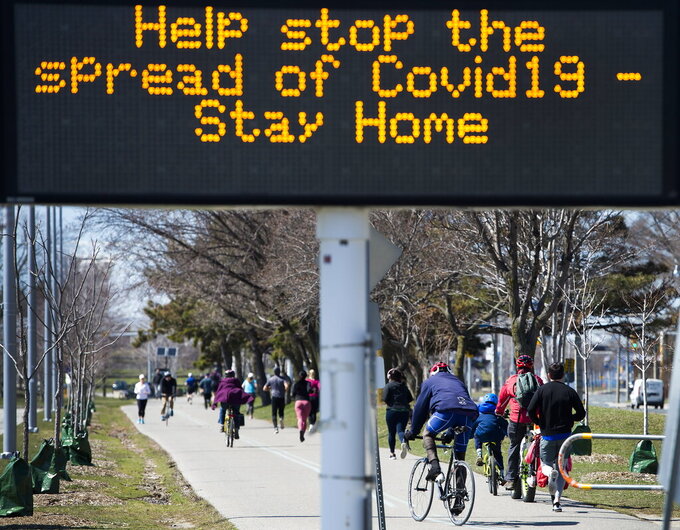 People get exercise outside on the lake shore path along Lake Ontario in Toronto on Thursday, April 2, 2020. Health officials and the government has asks that people stay inside to help curb the spread of the coronavirus also known as COVID-19. (Nathan Denette/The Canadian Press via AP)

TORONTO (AP) — The mayor of Canada’s most populous city said Thursday anyone caught walking within 6 feet (two meters) of another person in a Toronto public park or square may be subject to a fine of up to $5,000 Canadian (US$3,536)

Mayor John Tory said the public has been warned many times and the willful disobedience needs to stop amid the coronavirus pandemic.

"Lives are potentially at stake, and we will turn up the heat in the hopes that the few who still don’t get it, or pretend not to get it, will get with the program,″ Tory said.

Tory said parks and public spaces are where there are problems now. He said people who don’t live with each other need to separate themselves. People from the same household are exempt.

Tory said if it becomes a problem on sidewalks or elsewhere they will address it later. The new bylaw will be in place for the next 30 days.

The mayor said he doesn’t want Toronto to become New York, which has been the epicenter of the coronavirus outbreak in the United States.