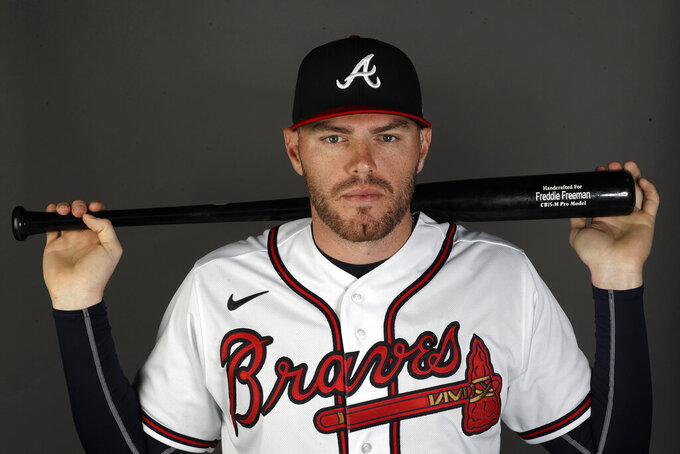 This is a 2020 photo of Freddie Freeman of the Atlanta Braves baseball team. Atlanta Braves four-time All-Star Freddie Freeman, reliever Will Smith and two teammates have tested positive for the coronavirus. Manager Brian Snitker says the four players, including right-hander Touki Toussaint and infielder Pete Kozma, agreed to have the team disclose their positive tests. (AP Photo/John Bazemore)

Freddie Freeman tests positive for COVID-19. Masahiro Tanaka gets hit in the head by a line drive. David Price announces he won’t play this season.

On this Fourth of July, even the return of baseball didn’t offer much cause for celebration.

As teams prepared to start their pandemic-shortened season, sobering examples of the game’s potential danger took place at camps across the country.

Major League Baseball is getting ready for a 60-game season that won’t include Price, a former Cy Young Award winner who was traded from the Boston Red Sox to the Los Angeles Dodgers in February.

“After considerable thought and discussion with my family and the Dodgers, I have decided it is in the best interest of my health and my family’s health for me to not play this season,” the five-time All-Star tweeted Saturday.

“I will miss my teammates and will be cheering for them throughout the season and on to a World Series victory. I’m sorry I won’t be playing for you this year, but look forward to representing you next year," Price said.

The 34-year-old Price said he was opting out about five hours after Atlanta manager Brian Snitker announced Freeman had tested positive along with Braves pitchers Will Smith and Touki Toussaint as well as infielder Pete Kozma. Snitker said Smith and Toussaint were asymptomatic and noted Kozma had a fever.

"It will be a while before we can get him back,” he said of the four-time All-Star first baseman.

It was uncertain whether Freeman would be ready for the start of the season, scheduled for July 23.

Due to concerns about medical privacy laws, MLB isn’t making a practice of disclosing which players test positive. For example, Baltimore Orioles manager Brandon Hyde said the team doesn’t intend to reveal to the general public if anyone has tested positive. The Pittsburgh Pirates acknowledged there were positive tests within the organization but didn’t get into specifics.

In the Braves’ case, the four players who tested positive permitted Snitker to reveal their names. It’s a move he applauded.

“For me, I think it’s good in the industry and society, to know that this is a real deal,” Snitker said. “This virus is real. It’s nothing to mess with.”

Houston's Dusty Baker, who at 71 is the oldest MLB manager, added that “I admire Freddie Freeman and his group for coming out saying what the problem is. And hopefully this can get through to other people, other young people.''

Indeed, the news surrounding Freeman offered a reminder to players across the league that anyone is potentially susceptible. Freeman joins Colorado Rockies outfielder Charlie Blackmon as four-time All-Stars who have tested positive.

San Francisco Giants catcher Buster Posey says he hasn’t ruled out the possibility of sitting out this season, assuming the games are actually played. The six-time All-Star isn’t yet convinced there will even be a season.

“I just really think there’s no way we can give a hard line answer one way or another to what this is going to look like a week from now much less two months from now,” he said.

Posey's comments came one day after three-time AL MVP Mike Trout of the Los Angeles Angels said he still doesn’t “feel that comfortable” about playing this season with his wife expecting their first child in August. Trout said he is planning to play at this point but that much would depend on how he feels the next couple of weeks.

Texas Rangers outfielder Nick Solak said that “after getting tested, just waiting for the results, there’s a level of anxiety.” He acknowledged that anxiety might subside as the season wears on and players get more accustomed to going through the tests.

The most frightening scene of the day didn’t involve the coronavirus at all.

During the Yankees’ first official summer camp workout, Tanaka got hit in the head by Giancarlo Stanton's live drive. Tanaka immediately collapsed and stayed own for a few minutes before sitting up and eventually walking off.

The Yankees said in a statement that Tanaka was responsive and walking under his own power. He was sent to New York-Presbyterian Hospital for further evaluation.

That was the scariest moment of baseball’s bizarre and eerie return to the Bronx.

Before they even began their first official workout, Yankees players were startled mid-stretch around when someone set off a firework just outside the ballpark that echoed throughout the empty stadium. Similar bangs went off intermittently throughout the workout.

About 45 minutes after Tanaka was hit, a deafening siren went off in Yankee Stadium, drowning out music playing through the PA system for about 30 seconds. Emergency lights flashed around the stadium for about five minutes, as well.