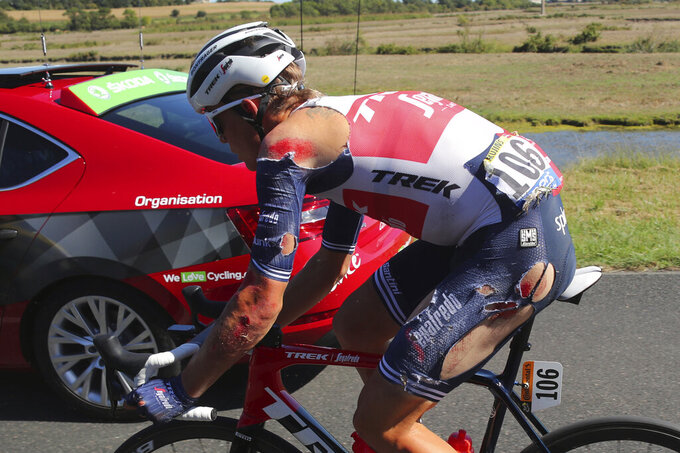 ILE DE RE, France (AP) — Tour de France riders passed coronavirus tests to confirm their good health only to endure numerous crashes along the Atlantic coastline when the race resumed on Tuesday.

Sprinter Sam Bennett prevailed ahead of Caleb Ewan to post his first Tour stage win, while Primoz Roglic avoided the many crashes that punctuated Stage 10 to keep the race leader's yellow jersey.

After the 168.5-kilometer (105-mile) ride from Ile d’Oleron to Ile de Re, Roglic maintained a 21-second lead over defending champion Egan Bernal. Frenchman Guillaume Martin was in third place, 28 seconds off the pace.

Having performed 841 tests of all 166 riders and team staff over the previous two days, organizers gave all cyclists the go-ahead to start. But Tour director Christian Prudhomme was forced to abandon the race after testing positive for the virus.

Also, four staff members from four different teams failed the test and were dropped from the race bubble.

“I'm happy that the race goes on, it's beautiful" Roglic said after the stage.

The race did lose one rider before the stage started, as the injured Domenico Pozzovivo of Italy pulled out.

Under sunny skies in western France, Stefan Küng and Michael Schar made an early break but were kept on a leash. On flat roads exposed to winds, the main teams rode at full speed at the front of the pack to avoid getting caught in crosswinds, limiting the gap to less than two minutes.

The nervousness in the pack was detrimental to several riders, including Robert Gesink and Nicolas Roche, who hit the tarmac at more than 55 kph with about 100 kilometers left. The crash split the bunch and the pair of breakaway riders was swallowed soon after.

Another big pileup involving Martin and Slovenian hopeful Tadej Pogacar occurred in the town of Rochefort after a rider apparently hit a median strip and fell. Both men rejoined the peloton after Martin received a new bike and was escorted back by three teammates.

Bennett, who now holds stage wins at all three Grands Tours, reached 65 kph (40 mph) in the last 500 meters as he overpowered Ewan to snatch the best sprinter's green jersey from Peter Sagan's shoulders.

“You dream of it and you never think it will happen. It does and it did. It took a while for it to hit me," an emotional Bennett said at the finish.

Under the race’s health protocols those four squads are now at greater risk of being excluded. Anyone who tests positive has to leave the race and any team with two or more positive tests — either rider or staff — within seven days also has to abandon.

The next wave of tests will be during the next rest day on Sept. 14.

Prudhomme’s positive test might have an impact on French political affairs as it came only days after he spent two hours in his car following a stage in the Pyrenees in the company of Prime Minister Jean Castex. As a result, French President Emmanuel Macron said a government meeting scheduled on Wednesday will be organized via videoconference, or postponed.

Castex was tested for the virus and it came back negative. BFMTV quoted the prime minister’s office as saying he would isolate himself for seven days as a standard precautionary measure.

Speaking to France Info radio earlier, Prudhomme said he does not have virus symptoms, adding that he will stay in isolation for seven days.

“Obviously the most important thing is that not a single rider tested positive,” Prudhomme said. “I did not come close to the riders over the past 10 days, we can see now how important it was to stay away from them.”

Under threat of cancellation at some point — more than 30,000 people in France have died after contracting the coronavirus — the Tour has been salvaged by pushing it back from its traditional July date to the end of the summer. The price paid for the race to be run are strict health protocols which include mandatory testing for riders and team staff on rest days.

All were tested before the Tour started in Nice and have since lived in the race bubble, making sure they stay away from fans and sponsors usually omnipresent during the race’s three weeks.

To avoid false positive results that could rule healthy riders out of contention, Tour organizers perform a retest and a blood analysis as quickly as possible in case of a positive test. They have set up a mobile coronavirus lab that can produce results in two hours.