Towns finds increased support from T-wolves on and off court 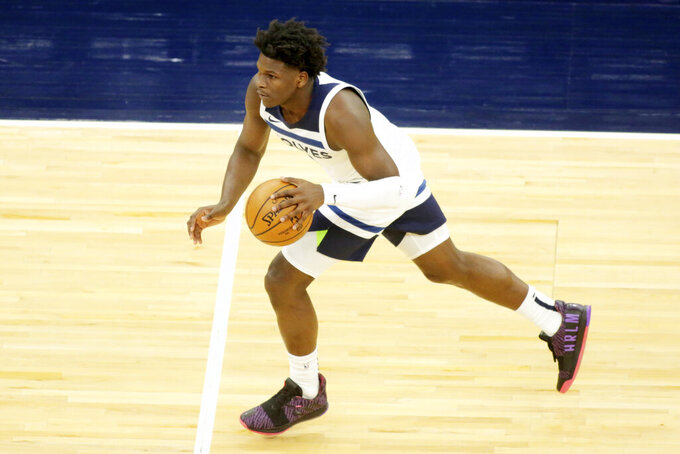 MINNEAPOLIS (AP) — Karl-Anthony Towns hasn't taken the court with the Minnesota Timberwolves for a game that counts in more than 10 months, a painful stretch of time that has broken him in more than one way.

Being back in action is far better than the alternative, but the comforting soundtrack of the bouncing ball and squeaking shoes can't suddenly erase the grief from losing his mother to complications from COVID-19 in April.

Upon reporting to training camp earlier this month, Towns said he's had six other relatives die from the virus.

The Timberwolves have prided themselves since president of basketball operations Gersson Rosas was hired last year on a player-centric environment, prioritizing the type of holistic support that has come in handy for all amid the trouble of 2020.

Towns was limited to 35 games last season due to a knee injury, a broken wrist and then the pandemic that eventually took his mom. The killing of George Floyd less than five miles from team headquarters prompted Towns to attend a rally initiated by former NBA player Stephen Jackson and lend his voice to the chorus around the league speaking out for racial and social justice.

Towns' close friend, D'Angelo Russell, arrived in Minnesota in February. They played one game together before Towns was sidelined by his wrist. Another familiar face, Ricky Rubio, was acquired in a draft-night deal after Rosas made Anthony Edwards the first overall pick.

“These guys, they make me have to take my mind off the things I’ve been dealing with and make me have to go out there and be a leader on and off the court," Towns said. "I’m fortunate that they gave me a chance to redirect my attention for however long I get with them.”

The Timberwolves, who start the 72-game schedule at home Dec. 23 against Detroit, have been busy trying over the last year to put more assistance in place for Towns on the court as well.

Towns and guard Josh Okogie are the only ones left who were with the Timberwolves when Rosas arrived in 2019. Only four other current players -- forward Jake Layman, guards Jarrett Culver and Jaylen Nowell, and center Naz Reid -- were around prior to the flurry of deals in February that fetched Russell, Hernangómez and guard Malik Beasley.

Despite his age of 34, the strategic alignment with Rosas and strong backing from owner Glen Taylor — who put the franchise on the market in July — coach Ryan Saunders will be under close scrutiny with his 36-70 record. He must mesh a rotation around Towns and Russell.

“We're seeing people’s strengths and what they play to and what people go to and their likes in their game," Culver said. "We just have to figure each other out.”

Rubio could come off the bench to spark the second unit, but don't rule out a two-point-guard lineup with the scoring-driven Russell playing next to the slick-passing Spaniard. Russell raved about Rubio's work with Donovan Mitchell (Utah) and Devin Booker (Phoenix) at his previous stops.

“Once teams start making adjustments and start trapping or start denying and making it harder for you, you need a player like that to relieve you,” Russell said.

The Timberwolves targeted Russell as a sidekick for Towns for awhile, but they had only 14 games with Beasley and Hernangómez to go on before deciding what to do with the restricted free agents acquired from Denver.

They committed major money to both Beasley ($60 million, four years) and Hernangómez ($21 million, three years), with team options on the final seasons of those contracts for players likely to fill out the starting lineup around Russell, Towns and a wing player to be determined.

Beasley is facing charges of drug possession and threats of violence stemming from an alleged incident at his home in September.

“I can control being able to learn from my mistakes and learn from the things I have to grow upon,” Beasley said, “but other than that, I’m just ready to get on the court and get the season going.”

The Wolves hit the road right after the opener for games against Utah and both Los Angeles teams. They face the defending champion Lakers on Dec. 27. Looming soon after is a pair of matchups against the Western Conference runner-up Nuggets, at home on Jan. 3 and in Denver two days later.