Tradition unlike any other back to traditional spot in April 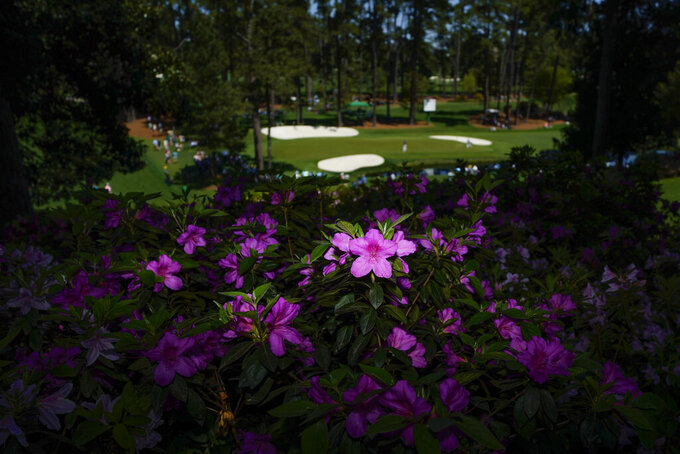 Azaleas frame 16th Green during a practice round for the Masters golf tournament on Monday, April 5, 2021, in Augusta, Ga. (AP Photo/Matt Slocum)

Notes: This Masters begins 144 days after the last one ended. It was held in November last year because of the COVID-19 pandemic. ... Dustin Johnson will try to join Jack Nicklaus, Nick Faldo and Tiger Woods as the only back-to-back winners at Augusta National. ... Tiger Woods is missing the Masters for the fourth time in the last eight years because of serious leg injuries suffered in a Feb. 23 car crash. ... Because of the pandemic, the field has only three amateurs, tying a Masters record. ... Rory McIlroy needs to win the Masters to compete the career Grand Slam. This is the seventh time he has come to the Masters with the Grand Slam in reach. ... Jordan Spieth has a victory, two runner-up finishes and third place in his seven appearances. ... The club is allowing limited spectators, a number believed to be around 8,000. It will be the first major to allow spectators since the pandemic began. ... Brooks Koepka is in the field. He had surgery on his right kneecap on March 16. ... The Par 3 Contest has been canceled for the second straight year. ... Russell Henley at No. 59 is the highest-ranked player in the world who did not qualify. That makes this the strongest field at Augusta in 10 years.