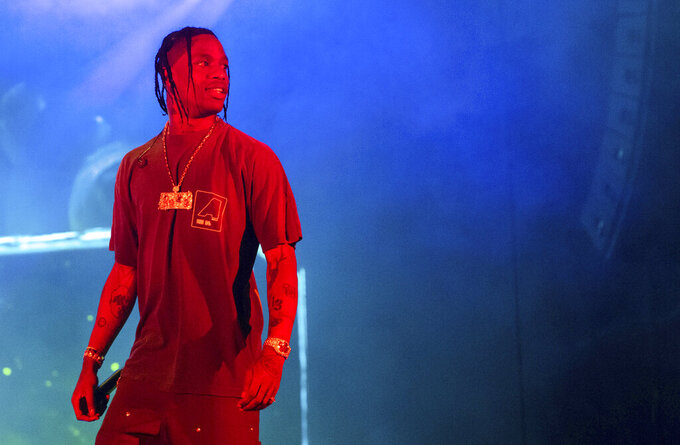 FILE - In this Sept. 15, 2019 file photo, Travis Scott performs during Day 2 of Music Midtown in Atlanta. In April 2021, Scott was honored for his work as one of five recipients of the inaugural RAD impact awards. Scott plans to give “several” scholarships to HBCU students with the funds. (Photo by Paul R. Giunta/Invision/AP, File)

Travis Scott, the rapper famous for his string of stylish hip-hop hits, from “SICKO MODE” to “Highest in the Room," and for the wild mosh pits at his concerts, has been flexing his philanthropic arms.

In October, Scott tweeted that he'd pay a semester’s tuition to five students at historically Black colleges and universities. He chose some of the recipients via social media, and a month later he launched his charitable Cactus Jack Foundation. The foundation partnered with his hometown of Houston to distribute 50,000 free meals to residents during the Texas freeze in February.

For his efforts, the Grammy-nominated rapper, whose real name is Jacques Webster, was one of five recipients announced last week for the first RAD — Red Carpet Advocacy — impact awards, which honor cultural figures who “inspire purpose” in their work. His fellow recipients were actors Charlize Theron, Priyanka Chopra Jonas, Laverne Cox and Margot Robbie.

Luxury Stores at Amazon partnered with RAD, an agency that creates advocacy campaigns for charities, to underwrite donations to five charities picked by the celebrities. (The amounts were not specified.)

Luxury Stores has also created an online shop, the RAD Impact Edit, to benefit the charities. Through Friday this week, RAD says all of Amazon's sales proceeds from the shop will be donated to the charities.

Scott's foundation, which will receive contributions from Amazon, plans to give several more scholarships for HBCU students using the funding. Separately, the rapper, who is co-parenting his 3-year-old daughter, Stormi, with her mother, Kylie Jenner, is working on a project in Houston that will operate as a design education center for youth.

The Associated Press spoke recently with Scott about his philanthropy and other work. The interview was edited for clarity and length.

Q: Why did you decide to launch your foundation in the fall? And how are you selecting the students to receive scholarships?

A: I felt like sharing inspiration, and sharing knowledge is key. It’s one of the main goals. My grandfather, on my dad’s side, was a dean of the graduate school at Prairie View A&M. My grandmother taught at Prairie View, and my dad and all my uncles went to Prairie View, and I was supposed to go there. But I went to another school (the University of Texas, San Antonio). That desire of education was always drawn into me through my grandparents, my dad and my mom.

I went to college and kind of wish I finished, but I didn’t. For other reasons, whether it was financial, I had a different kind of drive. But I knew if certain things could’ve been taken care of, I probably would have been around. My grandfather passed not too long ago. I want to use any type of power I have to carry on his legacy on education and the knowledge he instilled in me to help the next person who wants to be educated and not held back from education by anything.

But the scholarship is just one aspect of the foundation. When we did the past scholarships, the freshmen couldn’t even go to campus because of the pandemic. They couldn’t even enjoy the campus life, and their parents probably couldn’t go to work. I just wanted to help. The connectivity between that and my grandfather, and helping some of these kids who come from the same community I come from, it’s important. Especially some of these kids that go to HBCUs. My sister goes to Howard University, and my brother goes to Prairie View A&M.

A lot of people will get a lot of stuff done if the hardship wasn’t on them. So anytime you can come through and take that burden off their back, it’s amazing.

Q: How many more scholarships do you plan to give with the new funds the foundation is getting from the luxury store at Amazon and its partnership with the RAD awards?

A: I want to give out as many as we can every year. As the years come, and the more opportunities we have to be able to give out scholarships, we definitely want to do that. Hopefully, we can double and triple it every year.

We’re also about to start creating a space for people to create products, cook up ideas and hear from different creative people. They could teach a class at the spot and do different things. And maybe even help support people’s projects.

Q: You also partnered with the New Schools Parsons School of Design in New York, and My Brother’s Keeper, Houston — an initiative to reduce opportunity gaps for minority boys and young men in Houston — to bring Parsons' fashion design programs to the city. Why did you want to bring that program to your hometown?

A: In Houston, or cities like Houston, we don’t really have collegiate schools like Parsons where people can get those ideas out. You kind of have to go to New York City, London or Paris. But there are people in the state of Texas, the South or the Midwest who are creators but don’t have that outlet. With this program, kids in high school or college can start learning these designs early when they might not have the finances to go all the way to New York City. Thankfully, Parsons partnered with me to create this dream and establish it in Houston to help more creatives coming out from my hometown.

Q: Forbes once called you “corporate America’s brand whisperer” because of your successful endorsement deals with companies like McDonalds. What is the driving force behind it?

A: I’m looking at these not as endorsements but as partnerships. The main thing with what I do at Cactus Jack with my squad of people is connecting with these brands instead of things being thrown upon us. It’s about bringing change and helping inspire companies to do different things that really connect to who they call a consumer but I call humans — real fans.

Q: You’re headlining Rolling Loud in Miami this July, one of the first major music festivals that’s scheduled to happen after many of them were delayed or canceled amid the COVID-19 pandemic. What do you think it’s going to be like?

A: I can’t wait. I’m amped and ready to flip a stage and just see mayhem again. Oh, my goodness. There are so many songs I haven’t even performed.