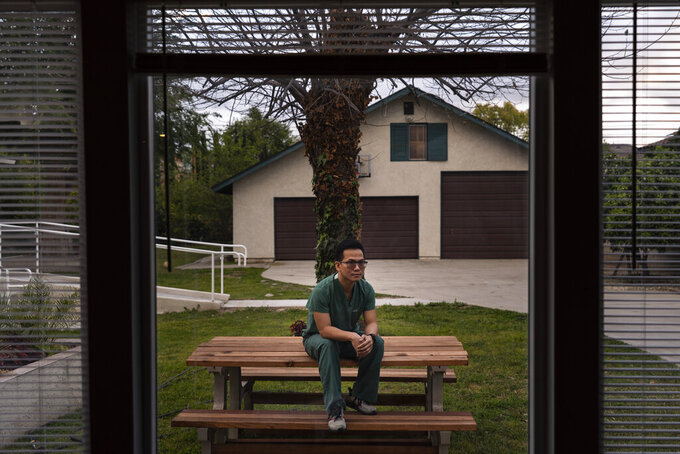 ICU nurse Meynard Villa poses for photos in his start-up senior care home in Arcadia, Calif., Thursday, March 25, 2021. Villa was on the verge of losing his family’s $150,000 investment in his new senior care home because he couldn't hire workers while grappling with a glitchy state system designed to automate criminal background checks.(AP Photo/Jae C. Hong)

SACRAMENTO, Calif. (AP) — Intensive care nurse Meynard Villa was on the verge of losing his family’s $150,000 investment in his new senior care home because he couldn't hire workers while grappling with a glitchy state system designed to automate criminal background checks.

The California Department of Social Services' new portal is supposed to help home and community care providers, foster care families and even nannies and baby-sitters who apply for clearance under the state's background check system.

But only 38% of California's nearly 60,000 licensed facilities are using the Guardian tool since it went live in January, while the rest find workarounds or remain frustrated. The department had promised that the $788,650 portal “will ensure background checks are completed faster and more efficiently, while making the process easier for applicants and agencies.”

Villa said he lost two clients for his six-bed home in the Los Angeles-area city of Arcadia because he couldn’t hire the employees to care for them.

The self-service tool is supposed to allow employers and employees to plug in prospective hires' identifying information to run background checks through criminal and child abuse databases; seek exemptions for minor or outdated problems that shouldn't bar their hiring; and add or remove employees associated with their agency.

Instead, frustrated employers said they couldn't log on, couldn't get answers through Guardian about why the portal wasn't working, and couldn't get help from equally stumped state workers. Employees could complete separate fingerprint checks, but then those couldn't be linked to the proper employees' files.

“If I’m trying to hire an employee, I can’t check whether they’re in the system or not,” said Ara Postaldjian, who owns the Redell Pines care home in Monrovia, northeast of Los Angeles.

He was unable to hire six employees as recently as late March because he couldn’t complete their background checks through Guardian.

Two others he vetted the old way, by calling the Department of Social Services and reading their names and Social Security numbers aloud — the kind of hands-on process that Guardian was supposed to replace. State workers were able to log in to a database to clear those two employees but couldn't give him definitive answers on whether the other six were safe to hire.

Navigating Guardian is nearly a full-time job for one employee recruiter at home care provider Home Instead, said human resources manager Vera Davidson, who is based in Pasadena for the Omaha, Nebraska-based national provider.

Communications from Guardian are “little to none” and state staffers also are stumped, she said, "so by the time we get any sort of answer to any of our questions, it’s things that we troubleshooted ourselves already, like months ago.”

But turnaround time for processing background checks has dropped from weeks to days, mainly because of “things we figured out kind of on our own,” Davidson said.

Department of Social Services spokesman Scott Murray said in a statement that the new portal is quickly processing and clearing most applications it receives while the agency “is actively working with our vendor to resolve some early technical issues ... so that all applications can be processed in a timely manner.”

“Our experience has been that when issues are brought to their attention, they are being resolved in a timely manner,” she said.

That wasn't Villa's experience. It took weeks of intervention from a state senator’s staff before he got access to the portal.

“After investing more than $150,000 of my family’s hard-earned money into my company, we are in danger of going bankrupt without ever caring for one resident, due entirely to the high levels of ineptitude and bureaucracy,” Villa wrote to local, state and federal officials in February.

Desperate, Villa turned to his county supervisor, congresswoman and state Sen. Susan Rubio. Four weeks after contacting Rubio's office, he received a call from the department and was able to log in to Guardian in mid-March. But he said he's still experiencing delays.

It’s the latest in a pattern of troubled state IT systems in recent years. During the pandemic, California's troubled unemployment agency database has been overwhelmed and seen a data glitch that backlogged nearly 300,000 coronavirus records and cost the state’s top health official her job last summer.

Democratic Assemblyman David Chiu is proposing to centralize IT projects under the California Department of Technology to counter what he called hundreds of “disjointed, duplicative” websites and reporting systems that have “led to many confusing and stressful user experiences.”

Applicants can still submit fingerprints separately from the Guardian portal, said Murray, the Department of Social Services spokesman. Villa said he was never told that.

A naturalized American citizen, Villa came to the U.S. from the Philippines as a teenager. He said he worked in multiple care homes to put himself through college, graduating from the University of California, Los Angeles, with a bachelor's degree in nursing in 2013.

He spent the pandemic working in the coronavirus intensive care unit at the University of Southern California's Keck Hospital. But what kept him awake nights was the looming failure of his business, which received its state license in early January.