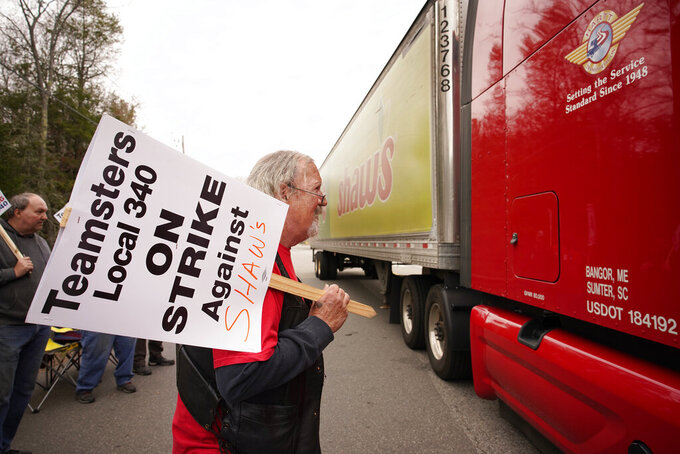 Jim Kelly, a truck driver with Shaw's supermarkets, looks at the driver of a truck leaving a Shaw's distribution facility while walking a picket line on strike, Monday, May 3, 2021, in Wells, Maine. Truck drivers for Shaw's supermarkets represented by the Teamsters went on strike Monday, May 3, stopping shipments to Shaw's and Star Market grocery stores in New England. (Gregory Rec/Portland Press Herald via AP)

The drivers are responsible for delivering grocery staples to more than 100 supermarkets across the region, said Joe Piccone, business agent for Teamsters Local 340 in South Portland. Fruit, vegetables and refrigerated items are handled by a separate facility in Methuen, Massachusetts, he said.

“Nobody wants to strike,” Piccone said of the 70 drivers and mechanics represented by the Teamsters who have been working without a contract since October.

“These guys are claiming that they have a great offer for us but the lawyer who works for the company quit,” he said. The workers are still waiting for the revised offer from the company, he said.

Shaw's, which is owned by Idaho-based Albertson's Companies, issued a statement saying the supermarket chain bargained in good faith and looks forward to returning to negotiations later this week.

“They kept the store shelves stocked," he said. "The pandemic profit that these guys made is completely crazy.”

The truck drivers operate from a warehouse in Wells and distribute products across the region, Piccone said. The mechanics who keep them on the road are based in Scarborough, he said.