Trump, Biden in close race as Wisconsin again in spotlight 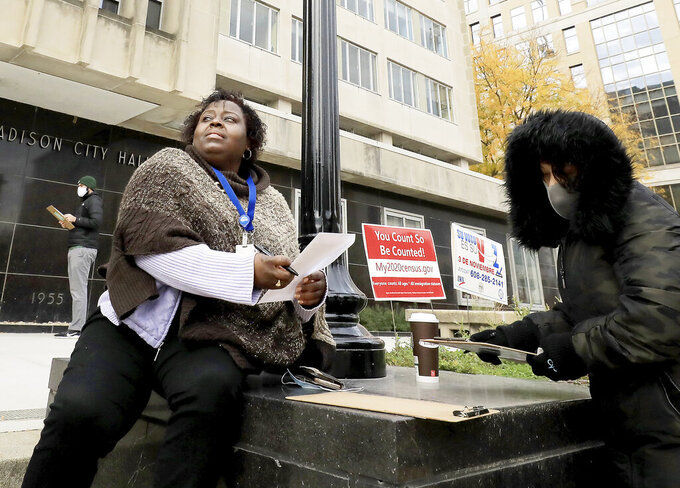 FILE - In this Oct. 20, 2020, file photo, Theola Carter, left, and Carrie Braxton fill out their ballots on the first day of the state's in-person absentee voting window for the Nov. 3 election outside the City-County Building In Madison, Wis. (John Hart/Wisconsin State Journal via AP File)

MADISON, Wis. (AP) — President Donald Trump and Joe Biden were locked in a tight race in Wisconsin as vote-counting stretched past midnight, and the nation's eyes turned to the same Midwestern battlegrounds that decided the election four years ago.

Trump and Biden were running close as counties around the state coped with a flood of absentee ballots prompted by the coronavirus pandemic. More than 1 million people resorted to mail-in voting, ensuring they could cast a ballot safely but raising the prospect that counting them all would take much longer than usual.

Congressional races were also on the ballot, and Democrats were intent on staving off a GOP supermajority in the Legislature that could strip the governor, Tony Evers, of any real veto power.

A look at key candidates, races, election mechanics and legal fights that shaped the campaign season:

Biden was hoping to reclaim the state from Trump after the president won it by less than 23,000 votes in 2016. Trump's victory marked the first time a Republican had captured the state since Ronald Reagan in 1984. Coupled with his wins in the other “blue wall” states of Michigan and Pennsylvania, Wisconsin propelled him to the White House.

Trump's narrow margin from four years ago gave Democrats hope they could flip the state for Biden, and they mounted an intense get out-the-vote effort, especially in liberal areas that did not turn out strongly in 2016. Polls consistently showed Biden leading Trump as Democrats bashed the president for his handling of the coronavirus pandemic.

They were locked in a close race as counting stretched from Tuesday night into early Wednesday. With nearly all votes counted, Biden had a lead of six-tenths of a percentage point over Trump, a margin narrow enough to allow Trump to request a recount if it stands.

Thanks largely to favorable district boundaries they drew, Republicans have had a stranglehold on the state Senate and Assembly for the last decade, and that seemed unlikely to change. They went into Election Day with an 18-13 edge in the Senate and a 63-34 advantage in the Assembly. Democrats' main goal was preventing Republicans from gaining a two-thirds majority in both houses. That would enable the GOP to override any veto from Democratic Gov. Tony Evers, allowing Republicans to advance their agenda at will. Democrats have handed nearly $2 million to their incumbents in a half-dozen swing districts in hopes of blunting the Republicans' attack. One of those incumbents, Sen. Patty Schachtner, lost her seat to Republican state Rep. Rob Stafsholt, but dozens of other races were still in play early Wednesday morning, and it was too early to tell if Democrats would be able to block the GOP push.

The run-up to the election was marked by plenty of court battles as Democrats and Republicans struggled for advantage. Democrats and allied groups went to court and won a nearly weeklong extended counting period for absentee ballots postmarked by Election Day. But a federal appeals court handed Republicans a win by striking that down. Trump's persistent but baseless claims of fraud in mail-in voting led both sides to brace for potential legal challenges well beyond Election Day.