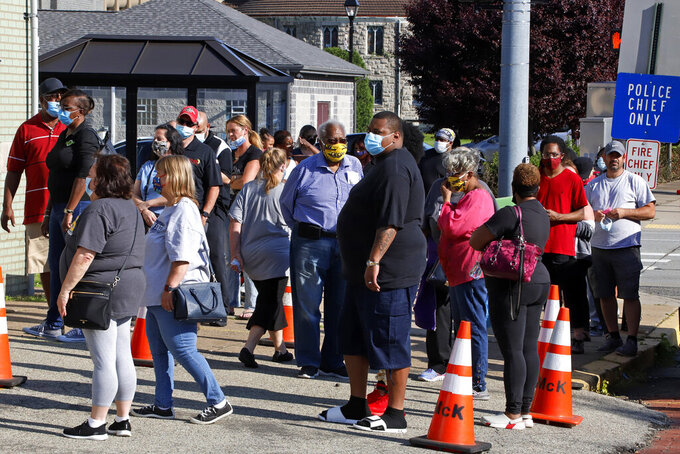 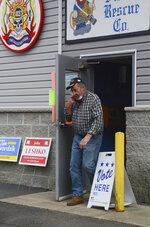 HARRISBURG, Pa. (AP) — Pennsylvania held a primary election Tuesday amid civil unrest, a pandemic, the introduction of new voting machines in some counties and the debut of mail-in balloting that pushed county election bureaus to their limits.

The result of the highest-profile contest on the ballot was a foregone conclusion: President Donald Trump and former Vice President Joe Biden, uncontested for their party’s nominations, both won their primary Tuesday in Pennsylvania.

The lack of drama in the outcome of the presidential primary and the huge number of voters who opted to vote by mail meant turnout was light.

Still, voters in some places were dealing with late-arriving mail-in ballots and a dramatic consolidation of polling places in Philadelphia, Pittsburgh and Montgomery County to cope with the difficulty of recruiting poll workers fearful of the coronavirus.

Ultimately, more than 1.8 million voters applied for a mail-in or absentee ballot, smashing expectations by state officials for the debut of the state’s new vote-by-mail law and drawing warnings that many contest results will be delayed well past election night.

Officials in Philadelphia and its suburbs, in particular, had been concerned that voters wouldn't receive their ballots in time for the post office to return them by Tuesday's 8 p.m. deadline.

Despite the challenges, the Department of State said Tuesday night that the election had gone smoothly.

Polls opened at 7 a.m. and closed at 8 p.m., with social distancing rules in place at the still-open locations.

There was only one competitive primary among the statewide races: a six-way race in the Democratic primary for auditor general. Candidates in the other two other statewide races on the ballot, attorney general and treasurer, were uncontested.

All 18 of the state’s members of the U.S. House of Representatives are seeking reelection, although only two have primary opposition. One of them, Pittsburgh's Mike Doyle, a Democrat and the dean of the state's delegation, won his primary as he seeks a 14th term. In the Legislature, all 203 House seats and half the 50-member Senate are up this year.

Lawmakers voted to postpone the primary election from April 28 to avoid the height of Pennsylvania’s spike in coronavirus cases, and candidates and political parties have urged voters to cast ballots by mail.

Wolf’s order to extend the deadline for counting mail-in ballots is limited to Philadelphia, Allegheny, Dauphin, Delaware, Erie and Montgomery counties, where his emergency declaration over the protests was active as of Monday.

Republican Party officials criticized Wolf’s order as usurping lawmakers' authority and violating constitutional protections that ensure equal voting laws, but had not challenged it in court as of Tuesday evening. In 2012, then-Gov. Tom Corbett, a Republican, used the authority, allowing counties that had to close their election offices in the days before the election because of Superstorm Sandy to extend the deadline to accept absentee ballots.

Voters who do not receive their ballot in the mail can vote provisionally at their polling location. In addition, some counties were providing ballot drop-off locations.

Meanwhile Tuesday, 22 counties were road-testing new paper-based voting machines, ordered by Wolf in 2018 as a bulwark against election meddling after the federal authorities said Russian hackers had targeted election systems in Pennsylvania and other states in the 2016 election.